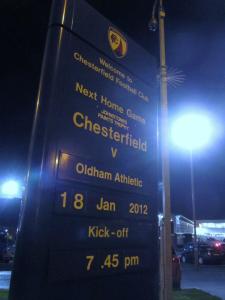 On Wednesday 18th January 2012 I was at the B2Net Stadium to watch the Spireites play Oldham Athletic in the first leg of the JPT Northern Section Final.

The match had been scheduled for last night with the extremely cold weather it had been postponed due to a frozen pitch.
Chesterfield are one of only 5 teams to have taken part in every year of the Football League trophy, the others being Hartlepool United, Rochdale, Northampton Town and Leyton Orient. This year’s competition had seen the Spireites reach the Northern Section final for the first ever time and they were now just 180 minutes away from a trip to Wembley Stadium.

Standing between them and the final was Oldham Athletic, who had already beaten the Spireites 5-2 at Boundary Park back in November before being held 1-1 at the B2Net Stadium a couple of weeks ago. However, Chesterfield had already beaten 4 teams that they had lost to in the league in this tournament so it was difficult to see previous results making much of a difference.

Also, the Chesterfield side was much changed with John Sheridan bringing in defenders James Hurst and Josh Thompson as well as midfielder David Davis to the club on loan. Along with the new signings, Frenchman Jimmy Juan also made only his second start for the Spireites.

There was much anticipation ahead of the game as this was a great chance for both clubs to make their first appearances at the new Wembley and a decent crowd of 5,724 were in attendance with 1,243 making the journey from Oldham.

The first half was a tight affair with neither side able to break the deadlock. Chesterfield’s Scott Boden had the best chance of opening the scoring in the first half when he got on the edge of Drew Talbot’s cross and was just inches away from goal but somehow managed to nod it past the post.

The two teams went in at the break goalless and after the interval it was Scott Boden who scored the first goal of the Northern final on the 49th minute when he converted Hurst’s cross from close range to put the Spireites a step closer to Wembley.

However, the Latics were gifted the opportunity to level the scores when Thompson pulled down veteran striker Shefki Kuqi in the area and the referee immediately pointed to the spot. Kuqi’s spot kick sent goalkeeper Tommy Lee the wrong way but the ball smashed off the crossbar and the Spireites remained ahead.

The lead didn’t last long though as Robbie Simpson levelled the scores in spectacular fashion just before the hour mark when he stole the ball from Juan and fired the ball in to the net from outside the area.

Oldham continued to attack and looked much more threatening in front of goal as they pushed for another goal. The pressure came to nothing and the Spireites were then awarded a penalty of their own the Jack Lester was sliced down in the box. Danny Whitaker made no mistake from the spot and he sent the ball straight down the middle to regain the home side’s advantage.

The Latics again went pushing for a goal and pushed everyone forward in the hope of levelling the game, but the Chesterfield defence managed to hold out and take an advantage to Boundary Park ahead of the second leg.

I was delighted to win the game and I would love the Spireites to make it to Wembley for the first time since 1995 as I think it would be wonderful if my first game at the stadium was watching my own team. On top of that, it was the first time I had witnessed Chesterfield win since September so it was nice to get the winning feeling back.

After the game I had pictures with Oldham’s Tom Adeyemi and new Chesterfield defender Josh Thompson.

The second leg will be shown live on Sky Sports and should Chesterfield make it to the final then I would certainly make the trip to Wembley for a day I would never forget. 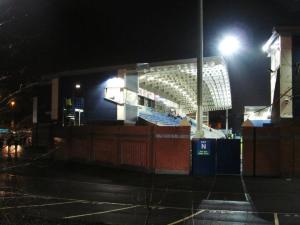 The B2Net Stadium lit up 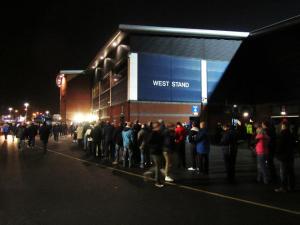 Queue's for tickets before the kick off

An Oldham player goes down injured during the warm ups

The player is stretchered off the field 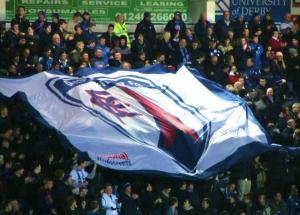 The Spireites supporters hold up their flag 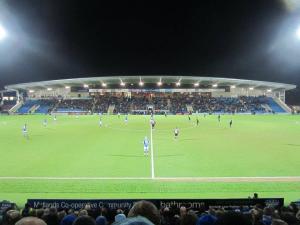 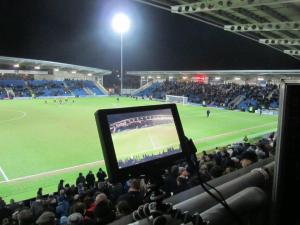 View from the TV Gantry 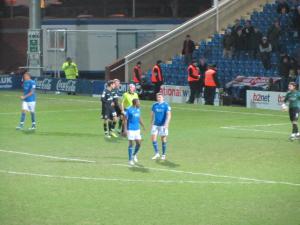 The referee awards Oldham a penalty

Kuqi steps up, but the ball hits the bar

Whitaker makes it 2-1 from the penalty spot 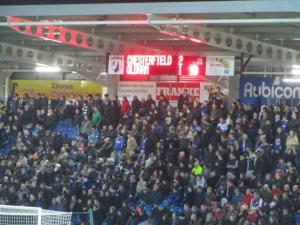 It's 2-1 to the Spireites at full time