On Tuesday 28th February I was at the B2Net Stadium to watch Chesterfield play Charlton Athletic.

On paper, this was a game that looked to have only outcome. Charlton Athletic sat 10 points clear at the top of the League 1 table and had lost fewer games than any other side in the football league this season with 2 defeats. Meanwhile, Chesterfield were sat at the foot of the table with just 6 wins in the league all season so it didn’t look like there was much chance of a Spireites victory in this game.

Despite this, a victory over promotion challengers Sheffield Wednesday had given Chesterfield fans some belief that their side was still capable of beating anyone and the Addicks came in to the match with just 1 win in their last 4 games so anything was still possible.

The difference wasn’t visible in the early periods of the game as the two sides cancelled each other out. Charlton nearly took the lead in the 8th minute when Bradley Wright-Phillips broke past Neal Trotman and attempted to take the ball around the goalkeeper but Tommy Lee got a hand to the ball to knock it to safety.

Chesterfield went looking for a goal of their own but found it difficult to break down the Charlton defence. Jack Lester found Nicky Ajose in the box who turned and looked to have a good shooting chance but the on-loan striker slipped at just the wrong moment and the ball was cleared, while Craig Westcarr’s had a half chance that he shot just wide.

However, it was the league leaders that broke the deadlock on the 44th minute through Wright-Phillips. Danny Green’s deflected cross bounced off the underside of the crossbar and fell straight to the feet of the Charlton striker who couldn’t miss.

Chesterfield came out in the second half playing some decent football, and there were shouts for a penalty when Jack Lester appeared to be brought down in the area but the referee waved away the home side’s shouts.

The Addicks doubled their advantage on the 56th minute when Wright-Phillips looked to have received the ball in an offside position, but the flag stayed down and he fired in to the bottom corner from close range.

The linesman’s decision to keep the flag down angered both the Chesterfield fans and players, and this loss of concentration cost the Spireites again as just minutes later Johnnie Jackson slotted the ball home to put the game beyond doubt. Charlton’s domination continued on the 66th minute as Wright Phillips’ outstretched foot clipped the ball in to the bottom corner put the league leaders 4-0 ahead and complete his hat trick.

With the result now almost certain, Charlton made a double substitution and brought on former Chesterfield striker Leon Clarke, who is still the clubs top scorer this season. The Addicks continued to go looking for more goals but they couldn’t add to the 4 goal advantage.

The result left Charlton 13 points clear at the top of the League 1 table while the Spireites remained in bottom place and 5 points behind Walsall in 20th, though effectively 6 due to the much inferior goal difference.

Specially made shirts on sale in the club shop

The Chesterfield supporters on the Kop 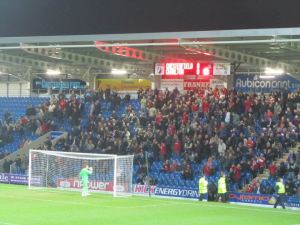 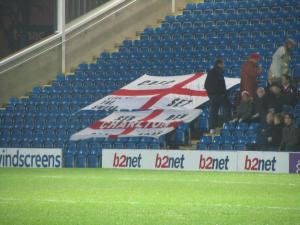 The floodlights shine on the B2Net Stadium 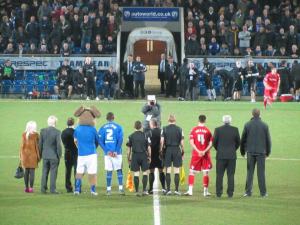 The Charlton players await the kick off 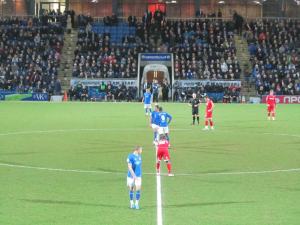 The Spireites get the game underway

The Addicks look to attack early on 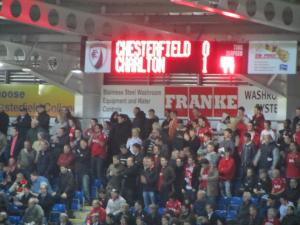 The players head for the dressing rooms at half time

Charlton kick off the second half 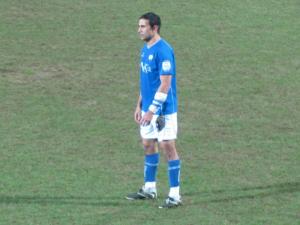 Jack Lester can't find his way through the Charlton defence 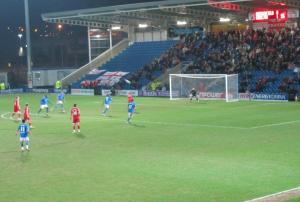 The second goal caused a lot of shouts for offside. This picture shows just after the ball was played and it appears he appears to be off... 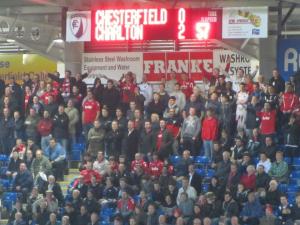 The flag stays down and its 2-0 to Charlton 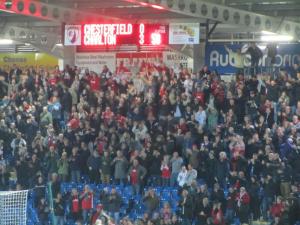 Jackson's goal makes it 3-0 to the league leaders 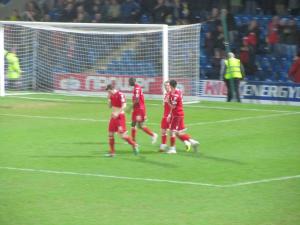 The Charlton player celebrate making it 3-0

Chesterfield efforts to find a goal are in vain 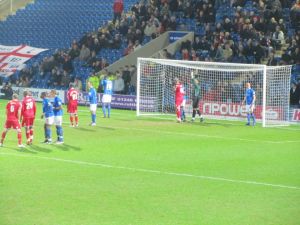 The Addicks continue to go looking for goals 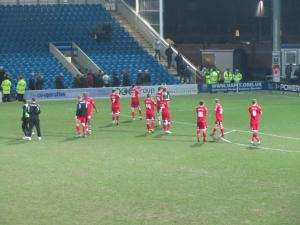 This evening's defeat was Chesterfield biggest ever at the B2Net Stadium 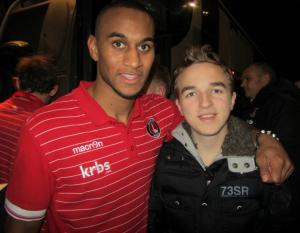 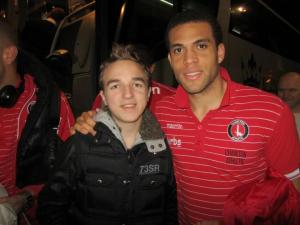 Goalkeeping coach Ben Roberts, who played in net for Middlesbrough against the Spireites in the 1997 FA Cup final 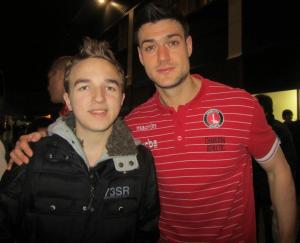