On Saturday 3rd March I was at the B2Net Stadium to watch Chesterfield play Tranmere Rovers.

Today’s game was must win for both teams as they were both in poor form and sat in precarious positions in League 1. Chesterfield sat at the bottom of the table and had lost their last two games, falling to a 1-0 defeat at Notts County before being thrashed 4-0 at home to league leaders Charlton Athletic on Tuesday night. In fact, the Spireites had managed just 6 league victories all season and defeat today may well have been fatal for the sides’ hopes of survival.

Tranmere Rovers were facing the very real threat of relegation themselves. After a decent start to the campaign, Les Parry’s side had won just 1 game in the last 19 in all competitions and were still without a win in 2012. This miserable run of form had seen Rovers fall down to 17th place and just 2 points away from the relegation zone.

The sun shined brightly over the B2Net Stadium, despite a brief heavy rain shower, as the match got underway. The early exchanges were scrappy with few good chances. John Welsh shot over the crossbar for Tranmere, while Jordan Bowery forced a save out of Owain Fon Williams in the Rovers net.

The Spireites began to grow in to the game as the half went on and they did create a couple of decent opportunities to take the lead. On-loan midfielder David Davis played Bowery through and he looked to have an excellent shooting chance, but he instead decided to play the ball back across area and his misplaced pass was quickly cleared by the defenders.

The best chance of the half was on the 38th minute when Jack Lester took the ball around the goalkeeper and fired the ball towards goal, but defender Ian Goodison did tremendously well to get back and block the effort. Bowery had the final attempt of the half with a long range shot that forced another decent save from the goalkeeper and at halftime the game was goalless.

The first action of the second half saw Nicky Ajose’s shot get palmed away by the Tranmere goalkeeper and Bowery fired the rebound wide of the post.

The game became quite scrappy again as both sides desperation for a victory began to show and there were few clear cut chances , so both managers decided to make changes in the hope of changing the game. Tranmere brought on Enoch Showumni to give their attack a boost while John Sheridan took off Ajose for Alex Mendy. Some of the home supporters were angered by this decision as they felt that there were worse players on the pitch than Ajose and there were even some chants of “You don’t know what you’re doing” towards the Chesterfield manager but these were short lived.

On the 75th minute, Danny Whitaker turned on the edge of the area, played a pass to Lester who in turn fed the ball through to Bowery and his shot flew in to the bottom corner to put the home side ahead.

With another defeat staring them in the face, some of the Rovers fans began angry and a few chants were aimed at their boss Les Parry along with a flag showing the message “Parry Out”.

Tranmere tried in vain to grab an equalising goal, late on Showumni looked for a second to have broken through on goal but Neal Trotman booted the ball to safety and a final corner saw the goalkeeper run up but it was well dealt with and the game finished 1-0 to the Spireites who moved off the bottom of the table once again and up to 22nd. Meanwhile, the defeat dragged Tranmere down to 19th place and just a point off the bottom 4.

After the game I had a picture with scorer of the winning goal Jordan Bowery before heading home, feeling a little more confident that the Spireites could stay in League 1 than I had at the start of the day. 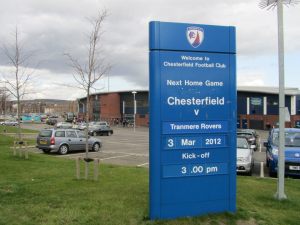 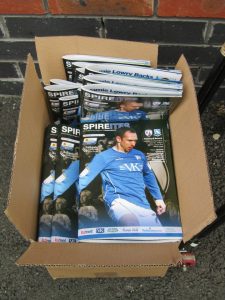 The Tranmere players arrive at the B2Net Stadium

A cameraman films the players as they get off the coach 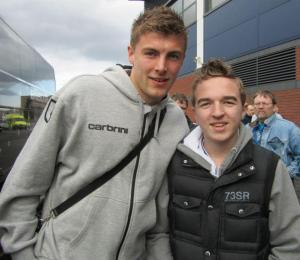 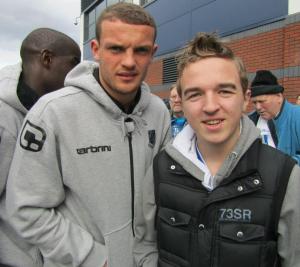 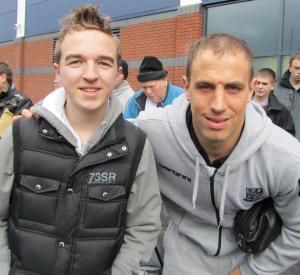 A marching band performs outside the B2Net Stadium

The match officials warm up 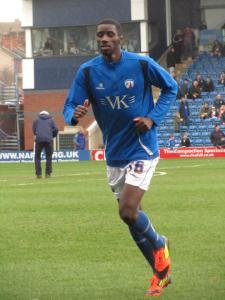 Chester on the pitch 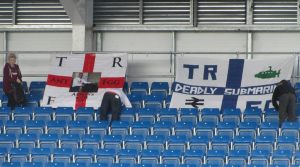 Two flags are put up by Tranmere fans

Two stewards sit by another flag located on the away end

A Chesterfield scarf on the back of the East Stand 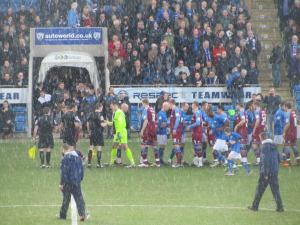 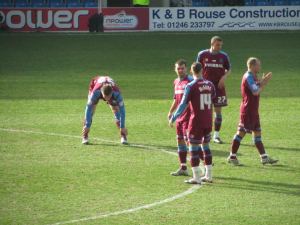 The Rovers players await the kick off

The Chesterfield fans in the East Stand

After a short burst of heavy rain, the sun shines over the B2Net Stadium 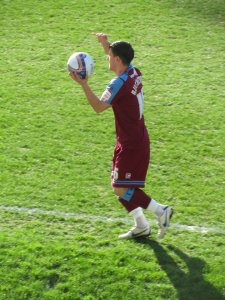 Buchanan takes a throw in for Tranmere 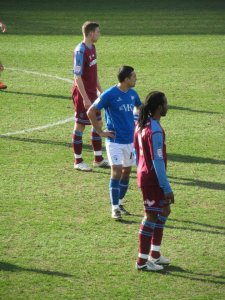 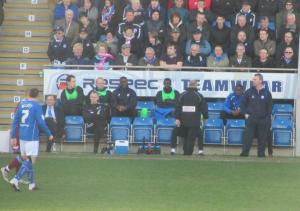 Les Parry watches from the touchline 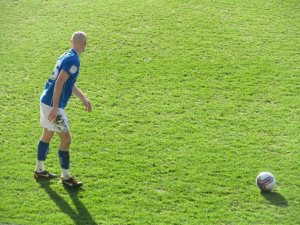 Drew Talbot takes a free kick for the Spireites 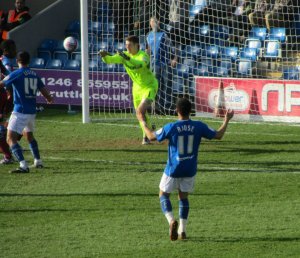 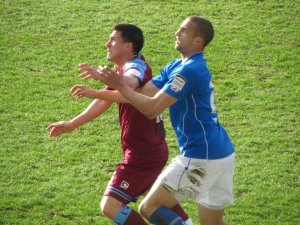 Buchanan and Bowery battle to win the header

The players head to dressing room with the game goalless

The Spireites push for a winning goal 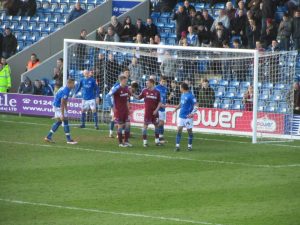 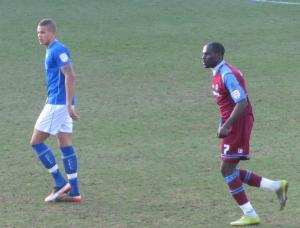 The Chesterfield players celebrate after Bowery opens the scoring 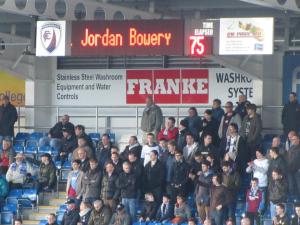 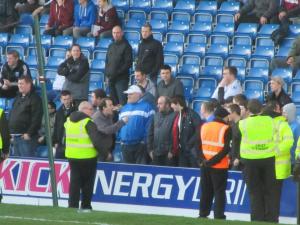 The Tranmere fans get frustrated as their clubs’ miserable run continues

Manager Les Parry watches his side succumb to another defeat

Some travelling supporters reveal a “Parry Out” flag 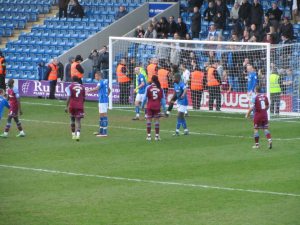 A final chance for Tranmere to earn a point 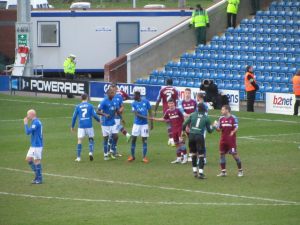 After the corner is cleared, the final whistle is blown and Chesterfield have earned a vital 3 points

The Chesterfield fans applaud the players

Les Parry steps on to the Tranmere players coach 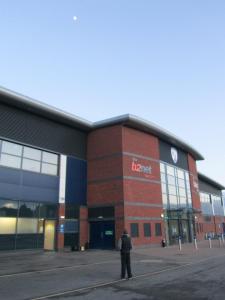