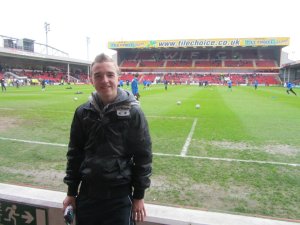 On Saturday 7th April I visited the Bescot Stadium for the first time to watch Chesterfield play Walsall.

Despite the disappointing situation that the Spireites found them, with relegation now looking inevitable, we decided to make the short journey to Walsall to get another league ground visited.

We travelled on the Chesterfield supporters club and the journey took little more than an hour. We decided we would head to the site of their former home Fellows Park first which is only about a quarter of a mile away from the Bescot Stadium

The Saddlers played at Fellows Park, from 1896 until 1990. The ground was originally known as Hilary Street until 1930, when it was renamed after H.L. Fellows, a club director. The site is now a Morrison’s supermarket and the only reminder of the old ground is a plaque inside which we went to have a look at and photograph.

The new ground is quite nice with one very impressive stand behind the goal. However, it does feel slightly as if the stadium has been placed amongst an industrial estate and from the outside parts of it look quite bland. Despite this, I did like certain parts including the large “Banks’s Stadium” sign and the largest stand could easily grace any Championship stadium.

Today’s game was vital for both sides as they were both sat precariously at the bottom of the League 1 table. A victory for Chesterfield would see renewed hopes of survival, while 3 points for the Saddlers would be a massive boost for their season and give them a great chance of staying up.

The game got off to an even start with both sides looking dangerous up front and quite shaky in defence. A few early chances saw Bowery’s chance saved while Ledesma fired the ball just over the bar for the home side. On the 20th minute Franck Moussa broke the deadlock when his header flew in to the top corner leaving the Saddlers goalkeeper no chance.

It was a promising start for Chesterfield, but the lead didn’t last long as Ledesma fired past Tommy Lee from the edge of the area to level the scoreline. The Argentine made it 2-1 to the hosts on the 33rd minute when he was left totally unmarked inside the area and was left with a simple chance to grab his and Walsall’s second goal.

It was a scenario that had become all too familiar for Spireites supporters this season, having seen their side start well and take the lead before throwing the advantage away with some poor defending.

Chesterfield started the second half brightly and had their brightest spell of the match. Not long in to the half Craig Westcarr broke through on goal but his shot from a tight angle was easily tipped wide. On the 54th minute the scores were level once again when Mark Randall and Bowery played a neat one-two before Randall poked the ball in to the bottom corner.

The Spireites went pushing for another goal but just 4 minutes after scoring, Walsall were ahead again. A quick counter attack left Sam Mantom through on goal and he slid the ball past the goalkeeper and in to the back of the net to make it 3-2.

Despite their efforts to find a third goal, Chesterfield failed to do so and in the end it was another defeat. The relegation now looks certain with 5 wins from 5 required and even then the Spireites could still go down if other sides pick up points. It was disappointing to witness another loss, but I still had a good day at the Bescot Stadium and despite the scoreline, it was an entertaining game to watch.

Next up is Wycombe in another big game at the bottom of the table and defeat for Chesterfield will see them relegated on Easter Monday! 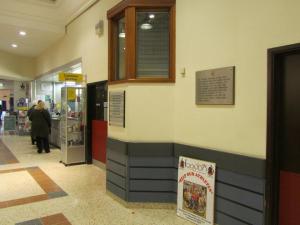 Inside the Morrison's, with the plaque on the wall 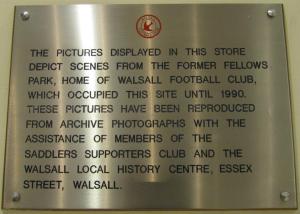 An aerial photo of the ground is on the wall

Our first view of the Bescot Stadium

Outside the Bescot Stadium

Stood in front of the Walsall badge

Memorabilia in the Saddlers Club 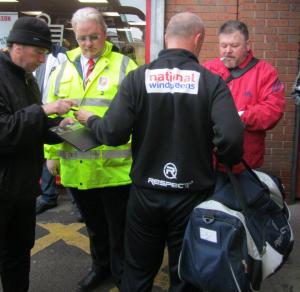 Chesterfield manager John Sheridan gets off the coach

The side of the away end

I purchase a programme

Me and my Dad at the Bescot Stadium

Chesterfield fans on the away end

The players walk on to the pitch 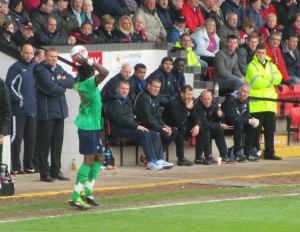 Tommy Lee picks the ball up out of the net

The Walsall players celebrate Ledesma's goal which makes it 2-1

The players head in at half time

View from the corner

The away end at half time

The teams come out for the second half

The Walsall players celebrate regain the lead at 3-2 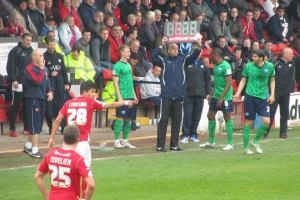 John Sheridan attempts to change the game with some substitutes

The Spireites push for a late equaliser 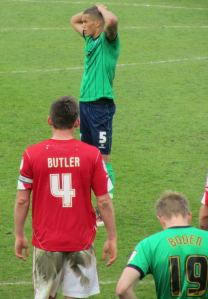 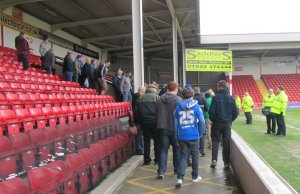 The Chesterfield supporters head home after witnessing yet another defeat