On Saturday 21st April I went to the B2Net Stadium for the penultimate home game of the season against Rochdale.

Today’s game was another massive match at the bottom of League 1 with both sides hoping to keep their slim hopes of survival alive. Defeat for either side would confirm their relegation, although even a victory would not be enough if Leyton Orient and Walsall both picked up 3 points.

The Spireites came in to the game on a decent run of form, having beaten Wycombe 4-0 before coming from behind to win 2-1 at Hartlepool last week. These results meant that they had gone from 13 points away from safety, to just 7 although it is still a huge task to stay in League 1.

Meanwhile, Rochdale were sat 8 points adrift at the bottom of the table, although a victory over Exeter City last week had kept their slim hopes of survival alive so there was still all to play for in this game.

The away side began the first half stronger and looked the more likely to open the scoring. Rochale were gifted an opportunity early on when some comical defending from Josh Thompson left Gary Jones through on goal but his shot flew wide of the target.

Dale came close again when Andrew Tutte’s goalbound effort was headed just wide by his teammate Jean-Louis Akpa Akpro. The Spireites were creating a few chances of their own, with Mark Randall firing a shot straight at the keeper before Jordan Bowery’s deflected effort rolled just past the post.

However, Dale looked more dangerous in front of goal and nearly had another great chance when Kennedy went on a mazy run in to the box, beating three players before Liam Ridehalgh managed to knock the ball away.

With the scores level at half time, both teams knew they had to go for it in the second half and as the game went on, it became tenser with both sides knowing anything less than a victory would leave them almost certainly relegated.

Dale were very unlucky not to open the scoring after around an hour when Jones’ deflected effort hit the inside of the post and Tommy Lee then made an excellent point blank save from Joe Thompson on the rebound.

The away side did take the lead on the 72nd minute courtesy of Akpa Akpro’s low shot in to the bottom corner. It was almost 2-0 just minutes later when Lee made another good save to tip a shot wide of the post.

With just under 15 minutes to go, it looked as if Chesterfield’s time in League 1 was coming to an end. Not only were the Spireites trailing 1-0, but Orient were leading Yeovil 2-0 and Walsall were level at Exeter City so as things stood the Spireites needed two goals to even be in with the slightest of chances.

Substitute Scott Boden gave them a glimmer of hope when he poked to ball over the line from close range to level the scores. Chesterfield were totally dominating the play now and desperatley pushing for a winning goal.

The comeback was completed on the 86th minute when Franck Moussa’s shot crashed off the crossbar and fell in to the path of Danny Whitaker, who fired the ball in to the bottom corner from just yards out.

As the final whistle blew there were huge cheers from the home supporters. The Spireites had survived another day with a dramatic late comeback. To top it off Exeter had beaten Walsall 4-2 and Yeovil had also scored twice in the last 10 minutes to grab a draw at Orient, meaning that if Chesterfield can win their remaining two games and one of these sides lose both theirs, then the great escape would become reality!

Sadly for Rochdale, this defeat saw their relegation confirmed and so they will return to League 2 after 2 seasons in this division. Only time will tell whether the Spireites will be joining them, but considering the position they were in 2 weeks ago, to even be in with a chance of survival is quite amazing.

Tommy Lee adjusts his headband during the warm up 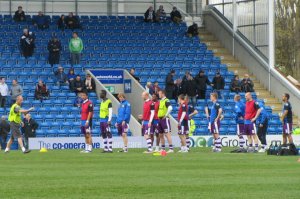 The Rochdale players warming up

View from the TV gantry 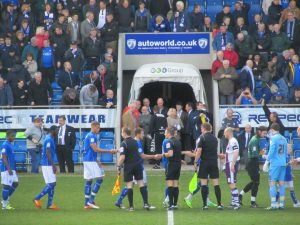 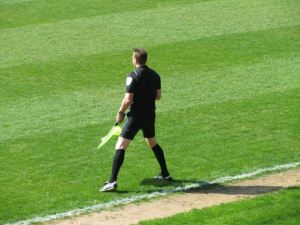 The linesman was on the pitch for the whole game!

Tommy Wright shouts to the players while John Sheridan looks on

Drew Talbot takes a throw in 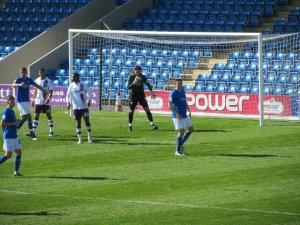 Rochdale push for a goal 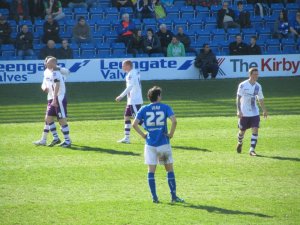 Akpa Akpro puts Dale ahead with 17 minutes to play 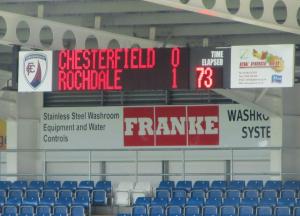 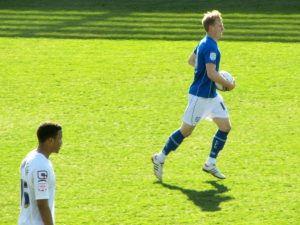 Danny Whitaker completes the comeback on the 86th minute 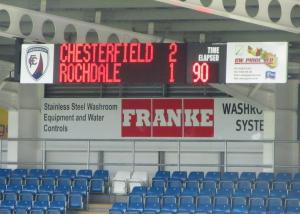 Chesterfield live yet another day 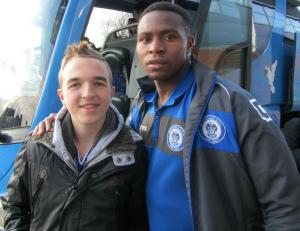 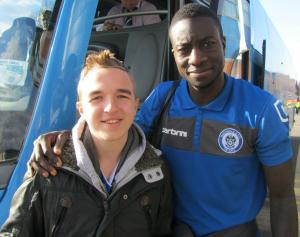 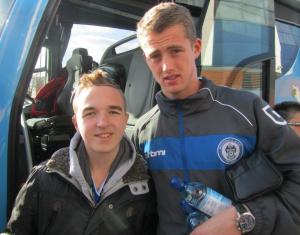