On Monday 13th August 2012 I went on tour of the Beatles sites of Liverpool. We went on the ‘Fab Four Taxi Tour’ and were taken on the tour by tour guide Ian Doyle, who did a brillant job of showing us around the sites and he was very passionate about the Beatles.

In this report, you can read about the childhood homes and birthplaces of John, Paul, George and Ringo including Mendips and 20 Forthlin Road.

This was the birthplace of John Winston Lennon. John was born on 9th October 1940 to Alfred “Freddie” Lennon and Julia Lennon (nee. Stanley) in a second floor ward of the hospital. He was named after his paternal Grandfather and the British Prime Minister Winston Churchill. His father was not present at the birth as he was away as a merchant seaman during World War II.

The birthplace of John Winston Lennon 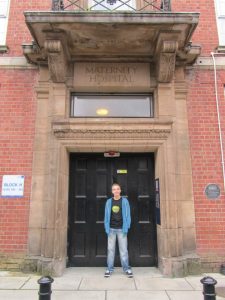 Stood in the doorway 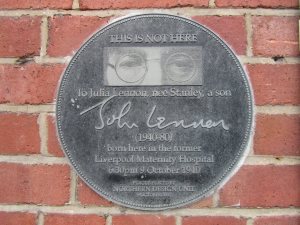 A plaque on the wall of the building

Stood by the plaque

This was his first home, where he lived with his mother Julia close to Penny Lane. Alfred, Julia and Julia’s parents moved in to the 3 bedroom house on Newcastle Road shortly after their marriage in December 1938. John was apparently conceived on the kitchen floor of this house after Alfred had returned from sea.

His father was often away from the home working at sea, but he sent regular pay cheques to the family until February 1944 when he went absent without leave. He eventually came home and offered to look after the family. However, Julia, who was now pregnant with another man’s child, rejected the idea. 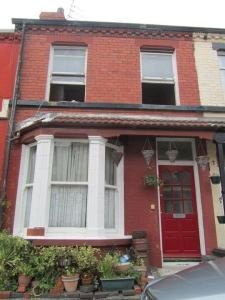 Stood outside the house

My Dad stands in the doorway

John lived here from 1945 until Beatlemania in 1963. He lived at Mendips with his Aunt Mimi and Uncle George after his mother had handed care of her son over to them.

After the split between John’s mother and father, Julia had begun living with a new partner, Bobby Dykins. John originally lived with the couple but after considerable pressure from Mimi, who contacted social services to complain about him sharing the same bed as Julia and Bobby, Julia gave care of John to Mimi and her husband George.

Mimi and George were a childless couple and so they happily raised John from aged 5 almost as if he were their own son. 251 Menlove Avenue was named “Mendips” and it was by far the most middle-class of all the Beatles’ child homes. It was at Mendips that John finally had something close to a stable family environment and he lived out the rest of his childhood and teenage years at this home.

However, his life at Mendips was far from trauma free. In July 1946, his father Alfred visited the house and took John for a holiday in Blackpool while secretly intending to emigrate to New Zealand with his son. Julia and her new partner Bobby discovered this and followed him. After a heated argument, the 5 year old boy was asked to choose who he wanted to live with, Julia or Alfred. John originally chose his father, but when his mother walked away he ran after her, crying. He lost contact with his father after this event until Beatlemania, when Alfred got back in touch with John and even released a singe of his own called “That’s my Life”.

When John was 14, his Uncle George died suddenly of a liver haemorrhage leaving Aunt Mimi to bring up John on her own with only occasional visits from Julia. She would visit him at Mendips while John visited Julia’s new family, including his two half sisters. Julia taught John to play the banjo, increased his interest in music and watched John play with his first group the Quarrymen. She died tragically on 15th July 1958 after getting knocked down in the road by an off-duty policeman. John was just 17 years old when he lost his mother.

Years later, Yoko Ono purchased the house, donated it to the national trust and asked to have it changed back to the way it was when John lived at Mendips, which had also been done at Paul McCartney’s childhood home on Forthlin Road. Both homes are now popular places to visit for Beatles fans. 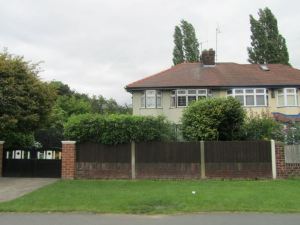 Our first view of Mendips

John Lennon lived at Mendips longer than anywhere else

The house has now owned by the National Trust 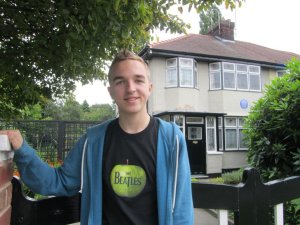 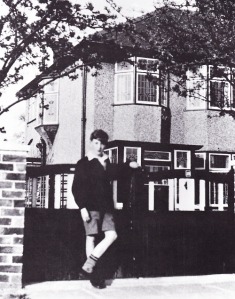 A closer view of the house

This terraced house in Allerton, Liverpool, was the main childhood home of Paul McCartney who lived here with his mother, father and brother Michael. The McCartney family moved in to the council house in 1955.

Paul’s father Jim worked in the cotton trade while his mother Mary was a midwife. On 31st October 1956, Mary McCartney died of an embolism after suffering from breast cancer. This event shook the family and a few years later, created a bond between Paul and John Lennon.

Jim McCartney was a keen musician and he encouraged both Paul and Mike to be musical. He gave Paul a trumpet following his mother’s death, but Paul decided to swap it for an acoustic guitar. Being left handed meant he had trouble playing the guitar at first, but he quickly learned to play it and wrote his first song, “I lost my little girl” at 20 Forthlin Road.

Paul lived in this house right up until he found fame and this house is often marketed as the birthplace of the Beatles as it is where the group wrote and rehearsed many of their early songs including hits “Love Me Do” and “I Saw Her Standing There”.

The house was bought by the national trust in 1995 and the interior was changed back to how it looked when Paul lived at the house. In 1999, he made a surprise visit to his old home. However, as he hadn’t told of his visit to house, the owner wasn’t home and so he couldn’t get in! Some of the neighbours saw him and had a photo, which can be seen below. 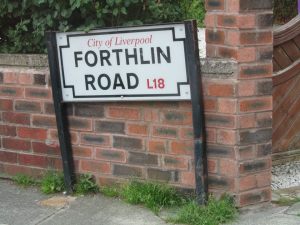 The road that Paul McCartney lived on for many years

Outside the main childhood home of Sir Paul McCartney 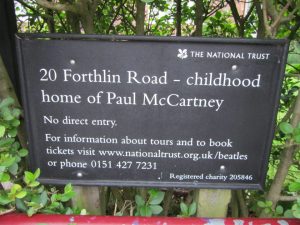 The house is now owned by the National Trust 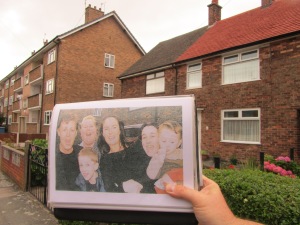 The photo of Paul McCartney’s visit in 1999

This house was the birthplace of George Harrison, who was born here on 25th February 1943. George’s parents, Harold and Louise, moved in to the house after their marriage in 1930 and they had 4 children of which George was the youngest.

The two up, two down terraced house was far too small for the family and on 2nd January 1950, after being on the re-housing list for 18 years, the Harrison family finally moved to a council estate in Speke. It was in Speke that George Harrison met Paul McCartney when they both lived in the area and caught the same bus to school.

The road sign, which is still the same as it was when George lived here 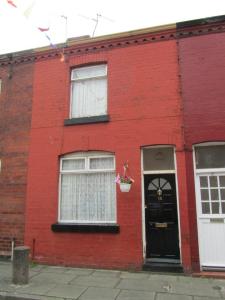 Outside the house that George Harrison was born in

George Harrison lived here from 1962 until 1965 during which George found fame with the Beatles. Just like the other Beatle homes, this house received fan mail by the sack load and also got fans waiting outside the house hoping to see George. You can see a photo below of George’s parents receiving some of this fan mail during their time at 174 Macket’s Lane. George also celebrated his 21st birthday at this house, an occasion that saw him receive thousands of birthday cards.

The house that George Harrison lived in from 1962 until 1965

The front of the house 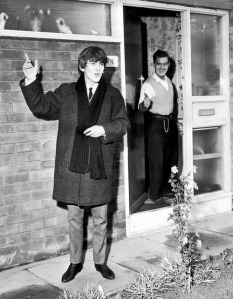 George Harrison waves to fans outside 174 Macket’s Lane. His father Harold looks on from the doorway 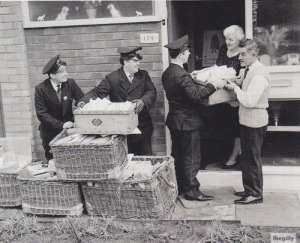 Richard Starkey, known more commonly as Ringo Starr, was born at this house on 7th July 1940, making him the oldest of the Beatles. His parents, Richard and Elsie, split up when he was just 3 years old.

Ringo only lived at 9 Madryn Street until the age of 6, when he moved to the smaller, less expensive 10 Admiral Grove, just a short distance away.

Plans to demolish the house have recently been stopped and the house is set to be refurbished and put back on the market.

Stood by the street sign, with the Empress pub behind me 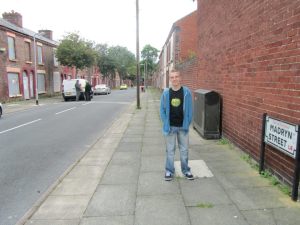 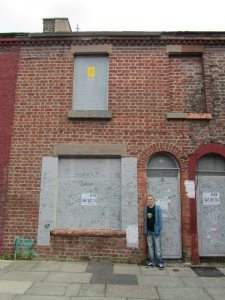 Stood in the doorway of Number 9

The doorway of the house

One Beatles fan had written this on the door

The word Beatles has been written in cement on a house opposite. This was done in the 1960’s

Ringo moved in to 10 Admiral Grove when he was 6 years old and lived here with his mother Elsie and stepfather Harry Graves until he found fame in 1963.

The house was just yards from his infants school, St Silas Primary, but Ringo was a sickly child and due to this he was often absent from school. Due to long stays in hospital, Ringo was taught to read and write at home.

Ringo’s mother Elsie married Harry Graves in 1953 and it was he who encouraged his musical interest, buying him his first drum set in 1956. 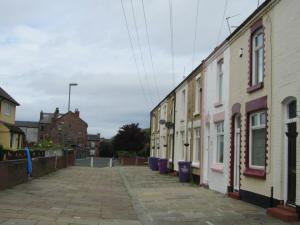 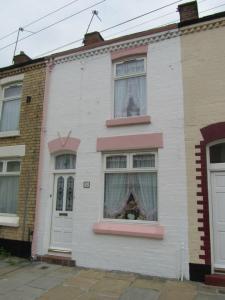 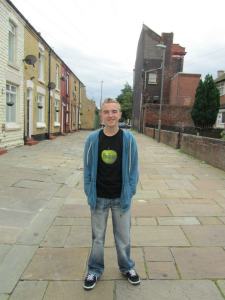 Recreating the photo in 2012