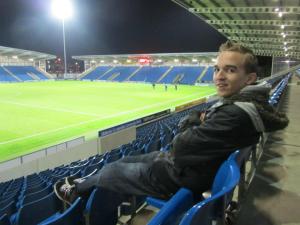 On Tuesday 20th November 2012 I went to the Proact Stadium to watch Chesterfield play Cheltenham Town in League 2.

Cheltenham Town have never beaten Chesterfield. In the 10 meetings prior to this match, the Spireites had won seven including a 3-0 victory at the B2Net Stadium two years ago. The other three games between he two sides had ended level. The Robins were looking to bring this poor record against Chesterfield to an end on a mild Autumn evening in Derbyshire.

This evening’s game was Paul Cook’s sixth since taking charge of Chesterfield at the end of October and it had been a mixed start for the new manager. In his first five matches, Cook had seen his side win just twice, including a huge 6-1 victory against Hartlepool United in the FA Cup. A last gasp victory against Oxford United on Saturday was certainly a confidence booster though as the Spireites looked to push in to the higher regions of the League 2 table.

Meanwhile, Cheltenham Town had made an excellent start to 2011/12 season. Despite a 4-2 defeat to Rotherham United at the weekend, the Robins had won seven of their last 12 matches and sat in the automatic promotion spots in 3rd postition coming in to the game.

Paul Cook made one change to the side that had beaten Oxford United at the weekend, with Marc Richards returning from injury to replace Scott Boden in the starting line up. There was also one change to Mark Yates’ starting 11 with Jeff Goulding replaced Jermaine McGlashan.

From the first whistle, Chesterfield controlled the play and Paul Cook’s style of football was clear to see with some quality passing from the Spireites. Loanee Brennan Dickenson came close to scoring his second goal for Chesterfield when he went on a mazy run in to the box. However, the first lacked as the 19 year old blazed his strike over the bar.

Some excellent build up play led to Chris Atkinson giving the home side the lead in the 16th minute. A neat one-two on the edge of the area from Marc Richards and Tendayi Darikwa led to Darikwa charging towards goal. The young winger cut the ball back to Atkinson who fired to ball in to the bottom corner to score his 5th goal of the season and put the Spireites ahead.

The Robins’ chances were few and far between. Marlon Pack’s weak free kick straight in to the arms of Tommy Lee was about as close as the visitors came in a 45 minutes that was dominated by Chesterfield.

On the stroke of half time it was 2-0 courtesy of Sam Togwell’s first goal for the Spireites. Darikwa was once again involved as his powerful strike was touched on to the crossbar by Scott Brown before Togwell headed the ball home from the rebound.

The 20 year old Darikwa was causing constant problems on the wing and he created yet another opportunity early in the second period when he found Talbot, who fired a shot across the face of goal.

Against the run of play, Cheltenham pulled a goal back three minutes before the hour. A simple corner was poorly defended by the home said and Kaid Mohamed headed the ball in to the net to make it 2-1 and give the visitors hope of getting something out of the game.

However, it took just two minutes for the Spireites to regain their two goal advantage. Dickenson played Richards through on goal and his first time shot flew past Brown and in to the back of the net to make the score 3-1.

With the result almost beyond doubt, veteran players Luis Boa Morte and Jack Lester were brought on to replace Dickenson and Richards and within minutes of being on the pitch, the two players combined to score Chesterfield’s fourth goal of the game. A Boa Morte corner flew past a group of players and found Lester, who poked the ball over the line with his first touch to cap an excellent performance from the home side.

The result saw Chesterfield move in to the top half of the table in 12 postition while Cheltenham remain in the automatic promotion places in 3rd. It had been an excellent performance from the Spireites who had earned a vital 3 points against in-form opposition to move a step closer to the play off positions.

Before heading home at the end of an enjoyable evening, I had a photograph with Robins goalscorer Kaid Mohamed as he made his way on to the team coach.

Cheltenham Town make their second visit to the new stadium 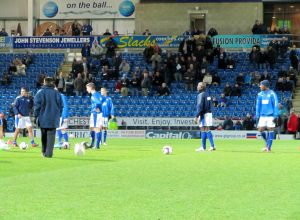 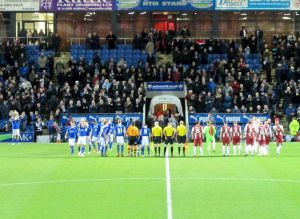 The pre-match photographs are taken

Paul Cook watches from the touchline 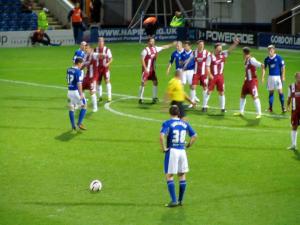 Goulding takes a throw in

The view from our seats

The half time score 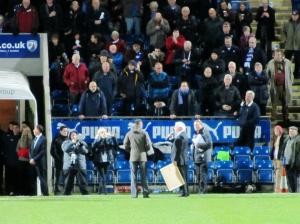 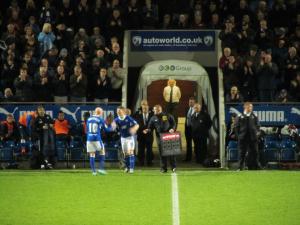 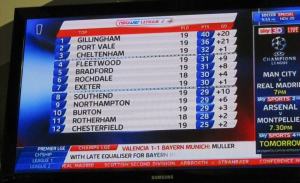