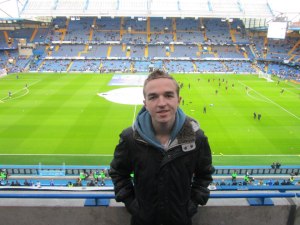 On Sunday 25th November 2012, I went to Stamford Bridge to watch Chelsea play Manchester City in the Premiership.

Stamford Bridge was somewhere I had always wanted to visit for a game. The 41,837 all-seater home of Chelsea FC is a great football stadium, keeping some of the original features of grounds while keeping up with the modern grounds of the top teams.  I was lucky enough to win tickets in a competition for the match between the champions of Europe, Chelsea, and the English champions Manchester City and I was very excited at the prospect of witnessing one of the biggest games of the season.

We were up early to catch the coach from Sheffield to London and the journey went smoothly, arriving in England’s capital just before midday. Before heading to Stamford Bridge for the game which kicked off a 4 o’clock, we had a quick look at a few of London’s sites including Buckingham Palace, Big Ben, Downing Street and the Houses of Parliment.

I had briefly visited Stamford Bridge back in March 2010, when I stopped off at some of London’s football grounds before going to watch Brazil v Scotland at the Emirates Stadium. However, we had only stood outside the stadium and so I was very excited to see a Premiership match at the home of Chelsea FC. We had a wander around the outside of the stadium to soak up some big match atmosphere and of course take lots of photos.

During this time, we saw the two coaches arrive at the ground as well as getting a fleeting glimpse of Chelsea owner Roman Abramovich entering the stadium. With just over an hour to go until kick off, we headed through the turnstiles and took our seats in the top tier of the West Stand, from which the view of the action was really good.

The major talking point coming in to this game was the sacking of Chelsea manager Roberto Di Matteo, who had won the Champions League and FA Cup during his short reign at the club. Former Liverpool boss Rafael Benitez had been immediately appointed as interim manager and this was an unpopular decision amongst the majority of the supporters inside the stadium. The home fans made sure there view was heard as kick off approach, singing “There’s only one Di Matteo” as well as giving Benitez a very hostile reception during his introduction.

Coming in to the game, the two sides sat in 2nd and 4th positions respectively with a game in hand of their nearest rivals. City were in 2nd place, knowing a victory would see them move to the top of the table, while Chelsea were in 4th and needed a victory to stay in touching of distant of the league leaders Manchester United. The visitors were in much better form ahead of the match as they remained unbeaten in the Premiership while home side hadn’t picked up a league victory since early October and had lost their last two matches in all competitions.

For his first game in charge of Chelsea, Rafa Benitez recalled former Liverpool player Fernando Torres up front while Gary Cahill lost his place in the starting 11. Roberto Mancini made two changes to the Manchester City side that had held Real Madrid in midweek, with Gareth Barry and James Milner replacing Maicon and Samir Nasri.

The boo’s for new manager Benitez were temporarily cut short as the sad news was announced that former Chelsea manager Dave Sexton had passed away at the age of 82. Sexton was in charge of the club for seven years and in this time won the FA Cup and European Cup Winners Cup. Both teams and sets of supporters respectfully took part in a minute’s applause in his memory before the game got underway.

The early stages of the game were rather uninspiring with very few opportunites. Torres struggled up front for Chelsea and he brought to an end a dangerous counter attack from the Blues with some poor control on the quarter of an hour mark.

David Silva came close to opening the score at the other end when he met Pablo Zabaleta’s cross and directed his effort just over the crossbar. Matija Nastasic also came close with a header soon after but it was easily smothered by Petr Cech in the Chelsea net.

The best opportunity of a rather lackluster opening period came on the stroke of half time. City’s Sergio Aguero had a free header in front of goal but could only place the ball in to the grateful arms of Cech to keep it goalless at the break.

The two title contenders continued to cancel each other in the second period and the chances were few and far between.

Juan Mata’s low deflected cross found Torres on the edge of the area and he blazed a strike over the crossbar while James Milner’s shot from a tight angle was blocked by the legs of the goalkeeper.

Attacking substitutions were made by both managers but this the game still remained deadlocked. The visitors looked more likely to find a winning goal, playing some quality passing football but they were unable to find a final product to win the game.

In stoppage time, City almost stole the 3 points when Nastasic met a Silva corner but his effort was once again saved by Cech and the game ended goalless, a result that saw neither side move up the league table.

Despite a disappointing game, it was still a brilliant experience to see two of the world’s top football teams go head to head at Stamford Bridge. I really enjoyed my trip to Chelsea and it is nice to say I have seen a game at such a fantastic and world famous stadium. 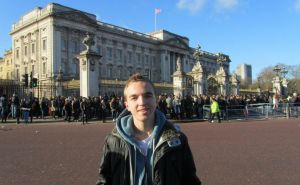 Outside Buckingham Palace on a Sunday morning

The changing of the guard 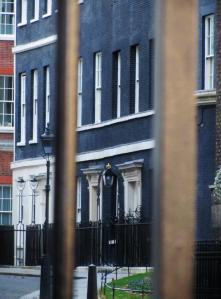 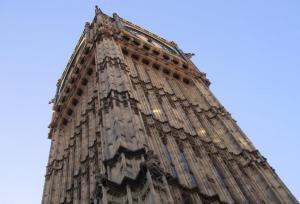 A close up of Big Ben

Standing in front of Big Ben

Our first view of Stamford Bridge 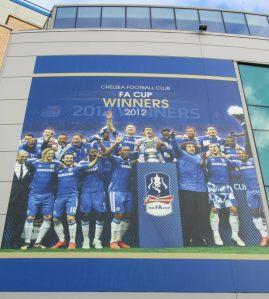 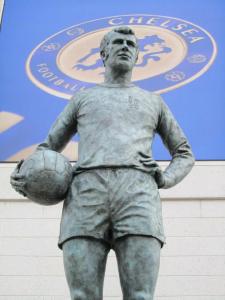 A statue of Peter Osgood 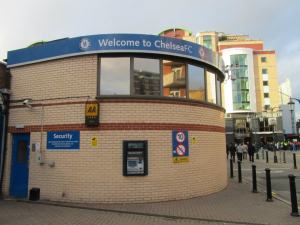 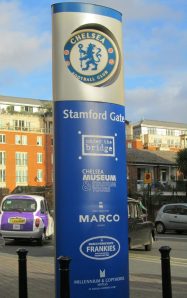 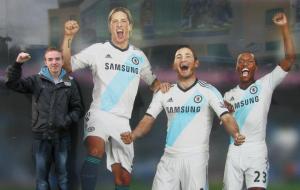 Stood with some of Chelsea’s current stars! 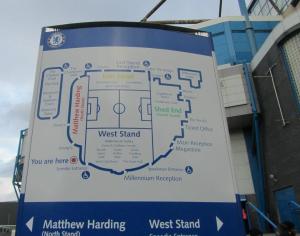 A plan of the ground

I hold up a Chelsea football in the club shop 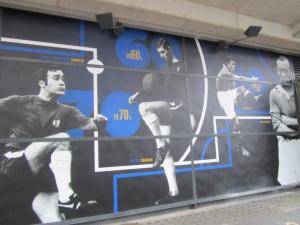 Chelsea legends from the past are remembered

A plaque on the original Shed End wall 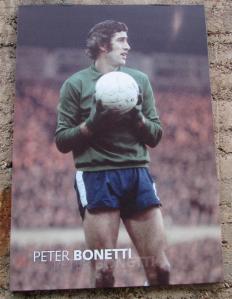 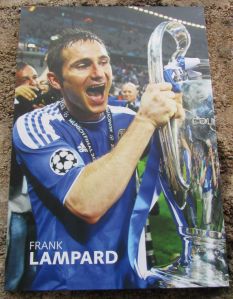 A corner of the stadium 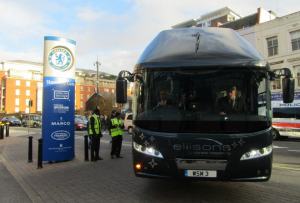 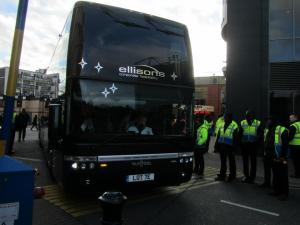 The Chelsea players arrive soon after 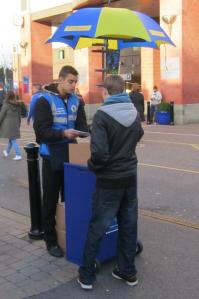 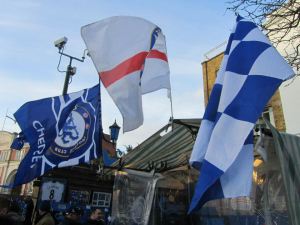 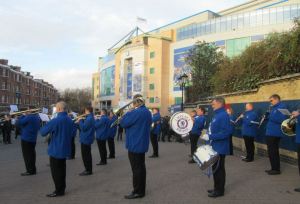 A couple of Chelsea flags

The home of Chelsea FC 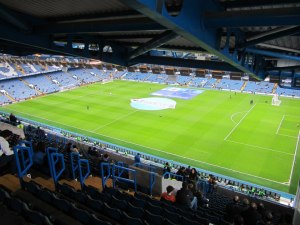 The view from the back of the stadium

A single seat in the middle of the stairway! 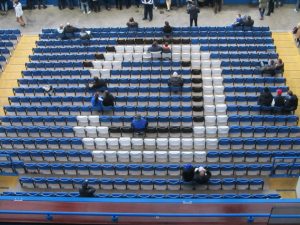 The bottom tier of the West Stand 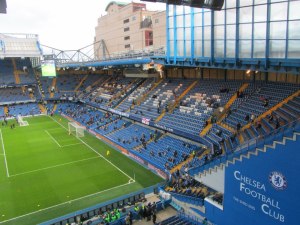 The Manchester City players warm up 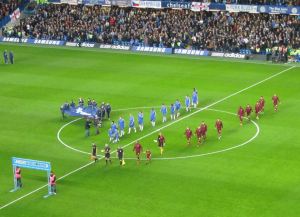 The players line up as the home fans unveil a flag 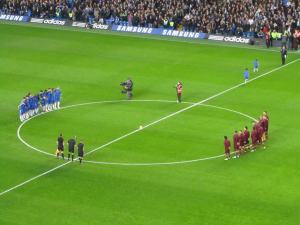 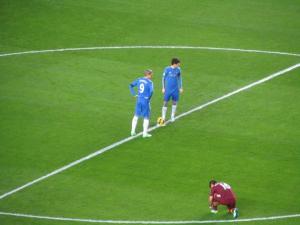 An early attack from City

I watch the game

Chelsea prepare for a corner 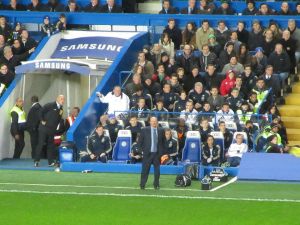 Rafa Benitez watches his first game in charge of Chelsea

David Luiz lines up a shot

Mancini and Benitez stand on the touchline

The players head to the changing rooms at half time 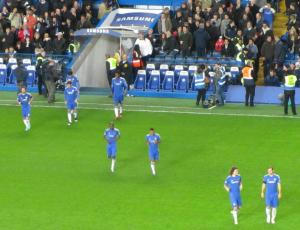 The Chelsea players come out for the second half 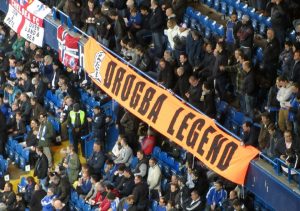 A banner unveiled during the interval

City push for a winning goal

Carlos Tevez is brought on 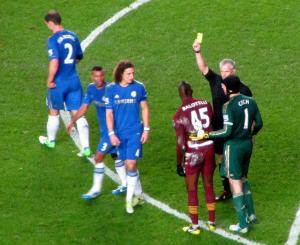 A final photo outside Buckinham Palace at night