On Saturday 29th December 2012, I went to the Proact Stadium to watch Chesterfield play Morecambe in my final match of the year.

Morecambe have been a real bogey side for Chesterfield in recent seasons. In the ten previous meetings between the two sides, the Spireites have picked up just a single victory and the Shrimps have never lost in Chesterfield. In the four games I have seen these two teams face off, the visitors have come away victorious on two occasions while the other two games ended level.

This was the final game of 2012 and Chesterfield were looking to end the year with a win to push themselves in to the play off spots. The Spireites were in 9th position and just a single point away from 7th place. Paul Cook’s team were on a decent run of form, losing just one of their last seven league games and coming in to this game on the back of a comfortable 3-0 win against York City on Boxing Day.

Meanwhile, the Shrimps were sat in 17th position, eight point clear of the relegation zone, and were still searching for their first victory in December after a 1-0 defeat at Fleetwood Town on Wednesday.

The first chance of the game fell to the visitors as Kevin Ellison found Andy Parrish, who directed his header wide of the target, much to the disappointment of a few Shrimps fans who were already up and cheering, thinking the ball had hit the back of the net.

Tommy Lee was again called in to action soon after when Andrew Wright’s strike took a huge deflection off Sam Hird and forced the goalkeeper to tip the ball away from the target.

The home side’s first good opportunity came when Danny Whitaker’s cross found Liam Cooper in the box and the loanee forced an instinctive save from Barry Roche to keep the game goalless. The resulting corner saw Drew Talbot direct a header on to the crossbar before the solid Shrimps defence finally cleared the danger.

Morecambe took the lead in dramatic fashion on the 29th minute through Chris McCready. The ball was played in to the area and headed forward by Wright, before McCready nodded the ball forward from close range. Lee looked to have made a magnificent save to keep the ball out but the linesman judged that the ball had crossed the line and gave the visitors the lead on the half hour.

The Proact Stadium was in a state of shock after this bizarre incident, but parity was restored on the 40th minute. 19 year old Conor Townsend curled a free kick over the wall and in to the far corner, leaving Roche with no chance as he simply watched the ball hit the net. It was a brillaint strike and Townsend’s first ever professional goal.

The second half saw almost total domination from the Spireites as they desperately tried to break through the solid Morecambe back line. However, the task was made much more difficult just after the hour when Townsend turned from hero to villain. After jumping for a header alongside Will Haining, the referee judged that the youngster had caught the Morecambe man with his elbow and showed him a straight red card.

However, despite being a man down, the game continued in much the same fashion as the Shrimps put men behind the ball and looked to hold on to their point. The frustration really began to show as Hird smashed an effort well wide of the target from distance.

The Spireites’ golden opportunity to snatch all three points came when Lee’s kick bounced over a couple of players before falling to the feet of Whitaker, who was through on goal. However, the midfielder fluffed his lines as he sent a weak effort wide of the target to keep the score at 1-1.

The visitors almost snatched the victory at the end when Alessandra charged forward before firing the ball just inches past the post.

It was a frustrating end to 2012 for Chesterfield as they remained outside the play offs in 9th place despite having plenty of chances to win this game. A solid performance from Morecambe had earned them a point but the Shrimps still fell to 18th place in the League 2 table.

After the game I had pictures with Morecambe’s Nick Fenton and Kevin Ellison as well as former Chesterfield youth player and current Shrimps forward Jordan Burrow.

2012 has been a mixed year for Chesterfield FC. It started with a brilliant day at Wembley in the Johnstone’s Paint Trophy but ultimately the Spireites ended the season in disappointing fashion as they returned to the fourth tier after just one season. A poor start to this season saw manager John Sheridan replaced by Paul Cook and there is a real feeling of optimism around the club at the moment as Cook looks to get the side back in to League 1. Despite the current league position, I still think automatic promotion is a realistic goal for Chesterfield, and if not then a victory at Wembley in the play offs wouldn’t be too bad either!

Morecambe are the final visitors to the Proact Stadium in 2012

Chester shows off his Santa hat! 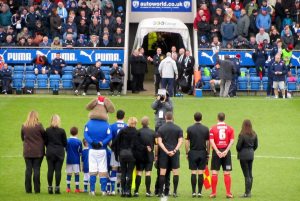 The Morecambe players prepare for kick off

The two captains shake hands before kick off

Paul Cook watches on from the touchline 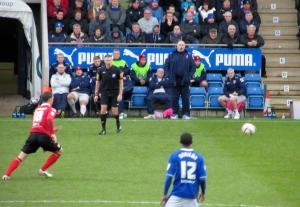 Morecambe look for an early advantage

Chesterfield attack from a set piece

Tommy Lee has a drink after conceding the opening goal

Chesterfield line up a free kick

Conor Townsend stands over the ball

Townsend’s strike flys into the back of the net 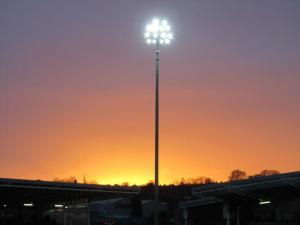 The sun sets over the Proact Stadium 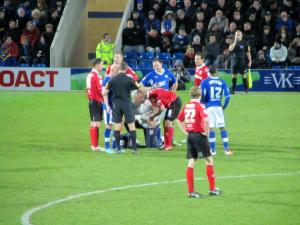 Conor Townsend is shown a red card for this incident 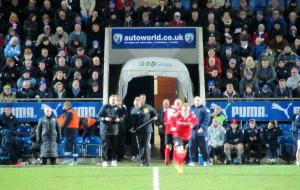 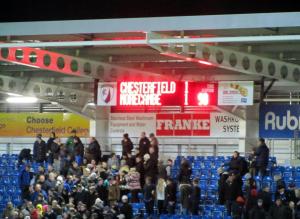 Andy Parrish is interviewed after the game 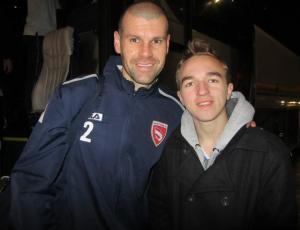