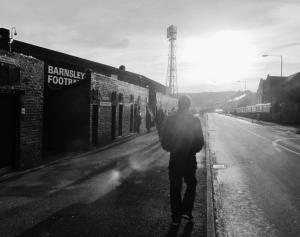 On Saturday 5th January 2013, I went to Oakwell to watch Barnsley play fellow Championship side Burnley in the FA Cup 3rd Round.

It was the first Saturday of the new year which could only mean one thing – FA Cup third round day! With Chesterfield making the long journey to Wycombe in League 2, we decided to pick a cup game to go to. Reduced ticket prices and with only a short distance to travel from Sheffield, we settled on Barnsley v Burnley at Oakwell.

I had briefly visited the stadium once before during a trip around the grounds in March 2008, but that was quite a while ago now and I hadn’t seen a game at Oakwell so it seemed a good choice. The journey went smoothly, taking around 20 minutes by train, and the stadium is just a short walk from the station.

It was quite a nice day considering the time of year and we had a walk around the ground prior to the game, taking plenty of photographs and soaking up the matchday atmosphere as well as buying our tickets for the lower tier of the West Stand. Barnsley’s home has managed to keep up with many modern stadia while also keeping plenty of character with traditional floodlight pylons and the old West Stand even still has wooden seating in the upper tier!

Barnsley have been struggling this season and came in to this cup tie sitting bottom of the Championship table. The Reds had earned just five league victories in 26 matches and defeat to Blackburn Rovers had finally cost Keith Hill his job at Oakwell, with David Flitcroft taking the role of caretaker boss for today’s game.

Meanwhile, Burnley were sat comfortably in mid-table in the second tier and with two wins in their last three games, the Clarets were probably favourites for this game. However, the previous meeting between these two sides earlier in the season had ended 1-1 so it was sure to be a close game.

Both the teams contesting this game have won the FA Cup – Barnsley in 1912 and Burnley in 1914 – but I doubt that many supporters at the game today would remember these victories! The Clarets had also been runners up twice, in 1947 and 1962, while more recently the Reds had famously reached the semi final in 2008, knocking out Liverpool and Chelsea before finally losing to 1-0 Cardiff City at Wembley.

David Flitcroft made one change from the side that lost to fellow strugglers Peterborough United on New Year’s Day, with Marlon Harewood replacing the absent Craig Davies, who is rumoured to be moving to Bolton Wanderers during this transfer window. Meanwhile, Sean Dyche made three changes to the team that beat Sheffield Wednesday 2-0 with Brian Jensen, Dean Marney and Keith Treacy taking the places of Lee Grant, Chris McCann and Martin paterson in the starting eleven.

Sadly, the ground was rather empty with just 5,091 fans inside the stadium. This seems to be becoming the norm for FA Cup ties, with many fans staying away and teams seeing it as a rest rather than an important competition.

The first half was virtually incident free with neither side causing the two goalkeepers any problems. An off the ball argument between Marlon Harewood and Brian Stock saw both players booked by the referee as the Reds lined up a free kick, which was fired well over the crossbar, before David Perkins also saw a long distance strike fly off target for Barnsley.

The only real talking point of a poor opening 45 minutes was Brian Stock’s dismissal for a second bookable offence. After receiving his first card for an argument with Harewood, he was then shown another yellow for a foul and this left the Clarets down to ten men for the rest of the game.

However, the home side failed to take advantage of their extra man and the game was something of a stalemate with very few opportunities. With around 10 minutes to play, caretaker boss David Flitcroft made a couple of substitutions with young forwards Danny Rose and Reuben Noble-Lazarus replacing Harewood and Chris Dagnall up front and these changes made a big difference to the game.

Just three minutes after joining the game, Rose scored the goal which proved to be the difference between the two Championship sides. Scott Golbourne kicked the ball forward and Jensen could only tip it on to the crossbar. The danger wasn’t cleared though as the ball fell straight to the 19 year old who fired home from point blank range to send the Reds in to Round 4, despite some late pressure from the Clarets to salvage something from the game.

Despite a very disappointing game, I still enjoyed spending my first matchday of 2013 at Oakwell. Also, I have now seen matches at all of my local ‘Big 6’ – Chesterfield, Sheffield Wednesday, Sheffield United, Doncaster Rovers, Rotherham United and Barnsley.

Our first view of Oakwell

The East Stand towers over the rest of the stadium 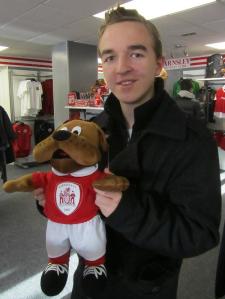 The turnstiles and the main entrance

I purchase a matchday programme 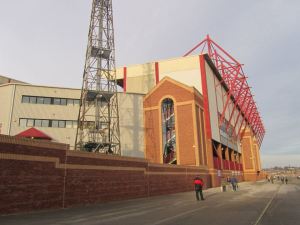 The back of the North Stand

A Burnley fan smokes his pipe outside the stadium

Oakwell is the home of Barnsley FC

Barnsley supporters are interviewed before the game

Looking through the turnstile 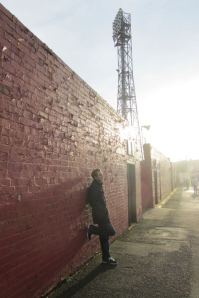 Leaning against the wall of the West Stand 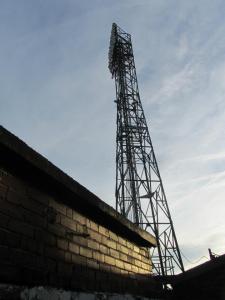 One of the floodlight pylons

The roof of the old stand 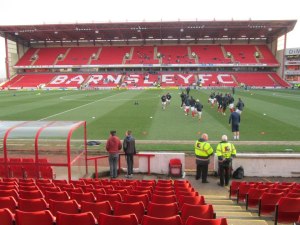 The lower tier of the West Stand 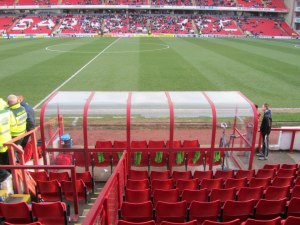 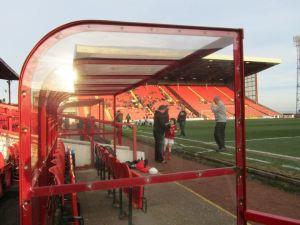 Looking through the dugout towards the North Stand

The Barnsley players warm up

The visitors warm up 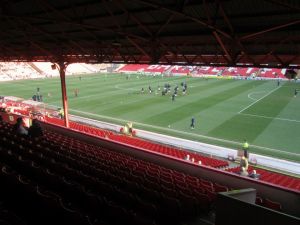 The view from the back of the West Stand

The top tier of the West Stand 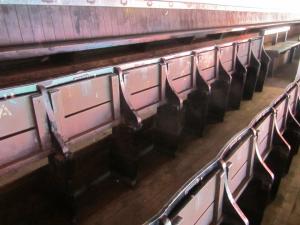 Me and my Dad with Toby Tyke! 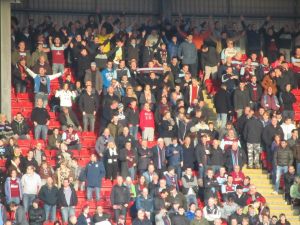 Just over 1,000 Clarets fans made the trip to Oakwell

The two teams prepare to go head to head

The players line up prior to kick off

The players and officials shake hands

The opposition players shake hands before the game

The Burnley players get ready for the game 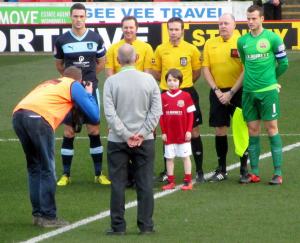 Barnsley get the game underway 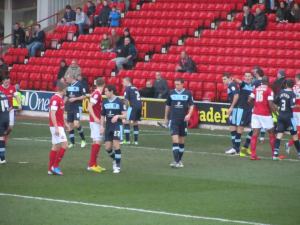 An early attack from the home side 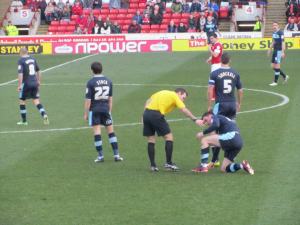 The referee checks on a Burnley player after he goes down 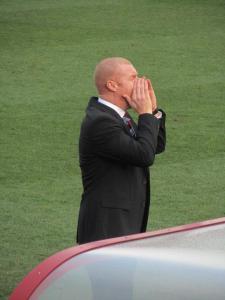 David Flitcroft and his assistant

Harewood walks away from the referee

Barnsley line up a free kick

A Burnley player attempts to stop the kick 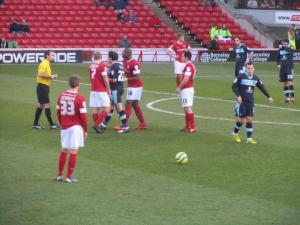 The referee tries to keep control of the players

The free kick goes over the crossbar 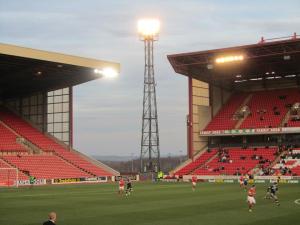 The floodlights shine over Oakwell

The unpopular linesman brings an end to a Barnsley attack

The referee tells the captains to calm their players down

Marlon Harewood speaks to the dugout

Barnsley line up another free kick

The referee sorts the wall out, before the free kick comes to nothing

The Burnley substitutes warm up during the break

Oakwell is all lit up 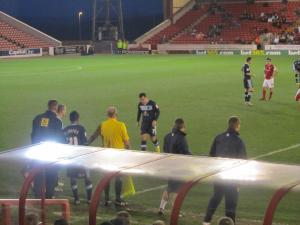 Neither side seems able to find a breakthrough…

Sean Dyche continues to shout to his players

The Barnsley fans watch the final few minutes of the game 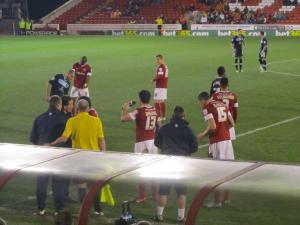 The players have a drink during a break in play

The keeper tips a hopeful effort on to the crossbar, but the rebound falls to Danny Rose who fires the ball home 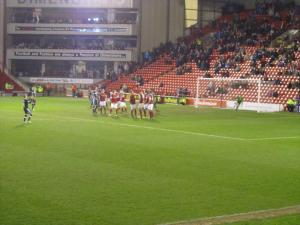 Burnley serach for a late equaliser 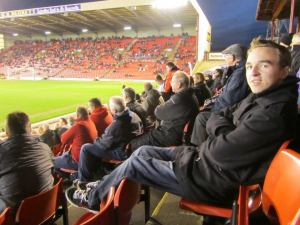 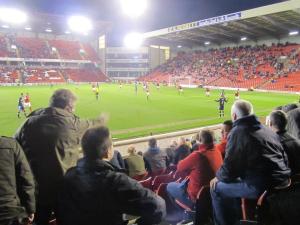 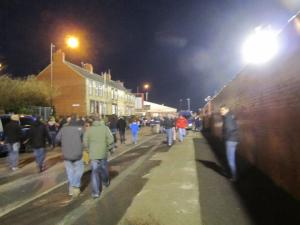 A final shot of the stadium