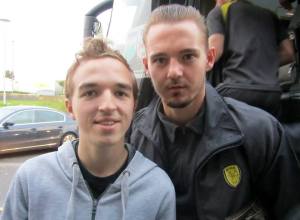 On Saturday 19th October 2013, I went to the Proact Stadium to watch Chesterfield play Burton Albion in League 2.

After picking up just a single point from their last three matches, this was a big game for League 2 leaders Chesterfield as they looked to get back to winning ways. Today’s opponents were Burton Albion, who sat in 14th place in the League 2 table after a mixed start to the campaign. The Brewers had gone unbeaten in their first five league matches of the season, but just a solitary victory since then meant they had slipped into the bottom half of the standings.

Gary Roberts returned to the Chesterfield line up after a three game suspension with club captain Ian Evatt falling to the bench. For the visitors, Gary Rowett made two changes to his side after a home defeat at the hands of Southend last week. Jimmy Phillips and Chris Palmer taking the places of Alex MacDonald and Billy Kee in the starting eleven for the Brewers.

Before the game, I spotted Leeds United manager Brian McDermott making his way through the main entrance at the Proact Stadium and I got a picture with him. After being watched by David Moyes at Fleetwood last week, McDermott is yet another high profile manager to come and watch the league leaders play in recent weeks.

The game got underway in front of just under 7,000 supporters and the away side that got off to a strong start. Chris Hussey came inches away from giving the Brewers the lead very early on when he hit a close range strike that hit both the crossbar and the post. But just 10 minutes into the contest, Burton Albion took the lead. Adam McGurk cut through the defence before finishing well past Tommy Lee to make it 1-0.

And four minutes later, the visitors’ advantage was doubled. McGurk was again on target when he got on the end of Hussey’s cross and powerfully headed the ball past the Chesterfield shot stopper.

Burton were in total control and Robbie Weir had a great opportunity to add to his sides lead. The ball was hit low across the face of goal and Weir was totally unmarked inside the box, but the Irishman could only fire his first time shot over the crossbar.

Chesterfield grew in to the game slightly as the half progressed, with Drew Talbot sending a comfortable header into the arms of the goalkeeper before on-loan forward Chris Porter directed a header just over the bar. However, the Spireites never looked particularly threatening and Burton were very good value for their two goal lead at the break.

The start of the second half was quiet as Chesterfield tried and failed to break through the solid Burton back line. Jay O’Shea was brought on for Drew Talbot at the break, and as the game wore on manager Paul Cook made two more switches. Porter was replaced by 6ft 4 striker Armand Gnanduillet and Marc Richards returned from injury to replace Gary Roberts.

Burton looked comfortable holding on to their 2-0 advantage as the Spireites rarely threatened the goal. Sam Morsy had a penalty appeal waved away by the referee when he appeared to be pushed down in the box. But as Chesterfield desperately searched for a way through, Burton very nearly added another when Weir’s shot smashed off the post.

Gnanduillet’s introduction made the biggest impact for the Spireites. In the final few moments, the Ivorian fired a long range effort towards goal which forced a save from Burton ‘keeper Pickford, before he came close with both a powerful header and a scissor kick in stoppage time.

However, Burton thoroughly deserved their victory at the Proact this afternoon. The Brewers had a number of chances and could easily have had 5 or 6 goals, while their defensive unit was solid and kept Chesterfield quiet for almost the entirety of the match. A disappointing defeat for Chesterfield who how now picked up just one point from a possible 12. Somehow the Spireites managed to stay at the top of the League 2 table on goal difference but it is very close now with just three point separating 1st and 9th place!

After the game, I got photos with Burton’s Adam McGurk, Rene Howe and manager Gary Rowett as well as Chesterfield’s Jimmy Ryan. The Spireites desperately need to get back to winning ways and put an end to this poor run. There isn’t long to wait for an opportunity though, as they host York City at the Proact Stadium this coming Tuesday and of course, I will be there cheering on the side! 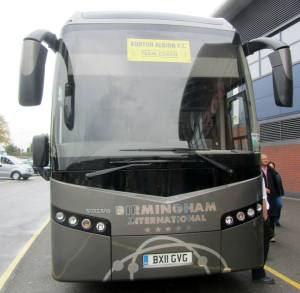 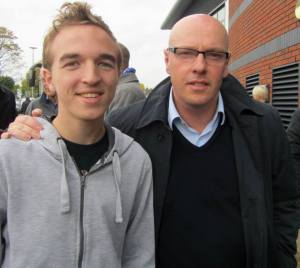 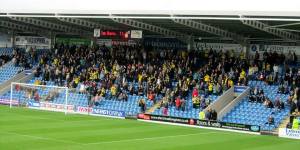 A Burton flag on the away stand

The Burton players huddle up 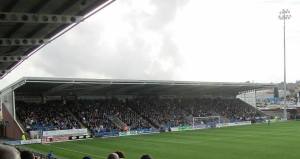 The Chesterfield dugout looks disappointed at the poor start 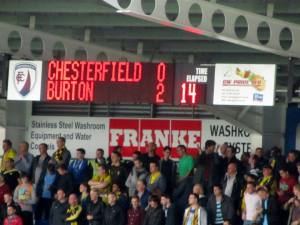 A bright day in Derbyshire 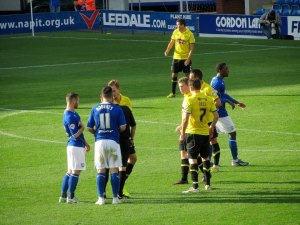 The Burton goalkeeper save sit comfortably

Chesterfield look for a breakthrough in the second period

The players stand over a free kick 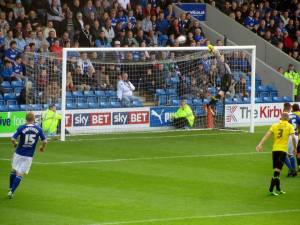 The ball sails over the bar 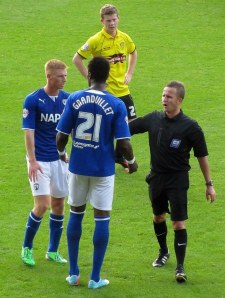 The referee has a word with Gnanduillet 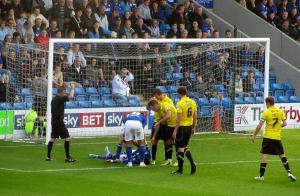 A final attack in added time

The stadium is quickly empty 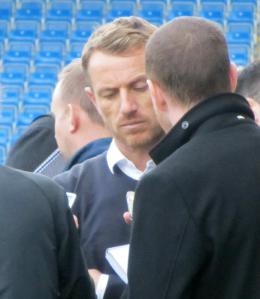 Chesterfield are still top of the league!