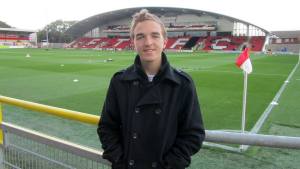 On Saturday 12th October 2013, I made my first every visit to Highbury Stadium to watch Fleetwood Town play Chesterfield.

The game of the day in League 2 saw the first and second placed teams go head to head at Highbury Stadium. Having never previously visited the ground, we decided to make the journey to Fleetwood to watch the Spireites in an important game and go one step closer to completing the 92. The supporters coach left the Proact Stadium at just after 10am and we arrived up at the home of Fleetwood Town with around an hour and a half to go before kick off.

The stadium is enclosed by terraced houses and the most striking thing about it is the large Parkside Stand, which towers over the rest of the ground and local area! We headed to the main entrance to say hello to our friend Paul Collier, who works for the Cod Army before watching the Chesterfield players arrive. The driver of the players coach had some difficulty navigating his way right up to the entrance and so the players had to get off and walk the remainder of the way. I took this opportunity to get photographs with Gary Roberts, who was suspended for this game, and former Premiership defender Ian Evatt.

This was only the Spireites’ second ever visit to Highbury having won 3-1 here in the final game of the last campaign. The visitors came into this game sitting at the summit of the League 2 table after an excellent run of seven wins and a draw from their first eight matches. However, two defeats in their last two, 1-0 to local rivals Mansfield and then a dramatic 4-3 loss at Morecambe after leading 3-0, meant Chesterfield’s lead at the top had diminished to just one point. Fleetwood sat in second after winning four of their last five league matches, followed by 4-0 hammering of Crewe in the JPT in midweek, and they knew that three points today would see them go top of the table.

Both managers made two changes to their starting elevens from the previous league games. For the home side, manager Graham Alexander replaced Steven Schumacher and Matty Blair with Ryan Crowther and Junior Brown. Paul Cook handed starts to Drew Talbot and on loan striker Chris Porter, who took the places of Jay O’Shea and Gary McSheffrey from the trip to Morecambe last Saturday.

The players were greeted by the noisy supporters and the game got underway in front of an attendance of 4,521. Amongst those in the crowd were Chesterfield legend Jack Lester, who was doing commentary for Radio Sheffield, and most notably Manchester United manager David Moyes. It was something of a surprise to see the boss of the reigning Premier League champions in the stands, apparently attending to personally scout Spireites’ winger Tendayi Darikwa.

The first shot on target of the match came from Fleetwood. Junior Brown cut inside on the edge of the box before firing a low strike in to the arms of Chesterfield goalkeeper Tommy Lee.

Antoni Sarcevic should have put the home side in front when he was gifted a golden opportunity in the early stages of the match. The 6ft midfileder was found unmarked just yards from goal, but his headed effort could only be directed over the bar and it remained scoreless.

At the other end, the Spireites saw a couple of half-chances saved by Scott Davies. First, Darikwa forced the goalkeeper to make a diving save before fellow midfielder Sam Morsy drove a long range strike towards goal but it was met by the Fleetwood stopper.

Nathan Pond had the ball in the net for the Cod Army, getting on the end of a cross and directing the ball in to the bottom corner, but the celebrations were very quickly cut short by the assistant’s offside flag.

Chesterfield came out in the second half and immediately burst in to life, clearly lifted by their manager’s half time team talk. The Spireites piled on the pressure and Chris Porter missed a simple chance to put them ahead. Darikwa’s long range shot was stopped by Davies but the rebound fell to the loan striker, who somehow managed to put his shot wide with the goal at his mercy.

10 minutes in to the half, Chesterfield did go ahead. Ritchie Humphreys’ corner found Liam Cooper at the near post and the defender flicked the ball past Davies in to the net, right in front of the travelling supporters.

And fellow defender Sam Hird almost doubled the advantage almost immediately when another corner led to the centre back forcing a finger-tip save from the goalkeeper.

Porter had another chance to bag his first goal in a Chesterfield shirt when Darikwa sent a dangerous ball across the face of goal, but the Sheffield United loanee couldn’t get enough on it and another chance went begging.

But Fleetwood were gifted an opportunity to level the score when Spireites captain Ian Evatt pulled down Sarcevic inside the box. Jeff Hughes stepped up, but he failed to convert from the spot as he sent the kick wide of the target.

Fleetwood continued to push forward in the hope of salvaging a point, but as the final moments approached it looked as if the Chesterfield defence would hold strong. However, in the 89th minute, Jon Parkin – who had been brought on by boss Alexander just moments earlier, found the net.

A cross into the box was flicked on and found Parkin unmarked at the far post. The veteran striker took a touch before firing the ball through the legs of Lee and charging away to celebrate with the ecstatic home fans.

In stoppage time, the Spireites had one last chance to win the match when they were awarded a free kick on the edge of the box. However, Jay O’Shea’s strike hit the wall and at full time it finished 1-1.

It was a disappointing end to the game from a Chesterfield point of view, failing to hold on to what would have been a hugely important three point. However, upon reflection a draw was probably a fair outcome and it does of course keep the Spireites at the top of the League 2 table, albeit by a narrow margin.

A hugely enjoyable day – an entertaining game, a good away point for my side and another ground closer to completing the 92! 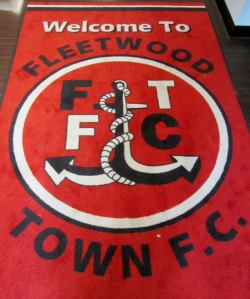 with our friend Paul Collier, who works for the Cod Army

The Chesterfield players make their way into the stadium

Gary Roberts, who was suspended for today’s game

The coach follows the players after difficulties getting to the entrance!

Stood by the FTFC badge

The Fleetwood players warm up

The old stand can be seen behind the new one! 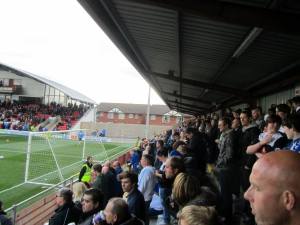 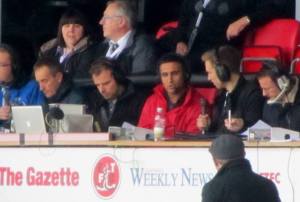 A Chesterfield fan shows off his hat! 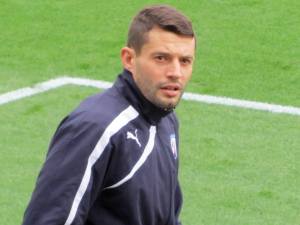 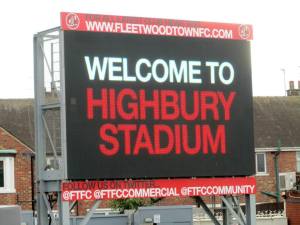 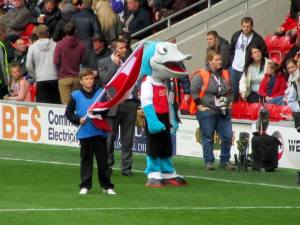 The Fleetwood mascot awaits the players

The two teams make their way onto the pitch 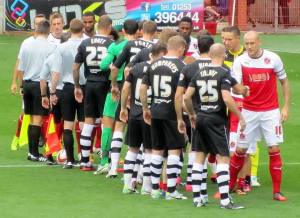 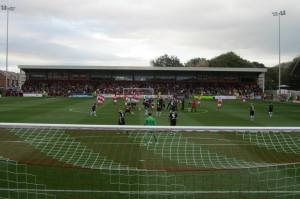 My view looking towards the Memorial Stand 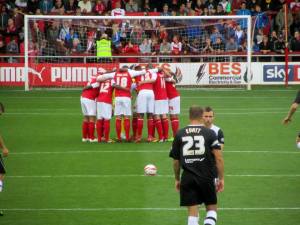 The Fleetwood players huddle up 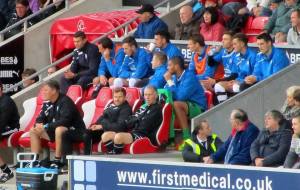 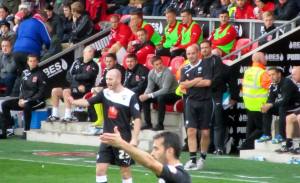 Paul Cook looks on from the touchline 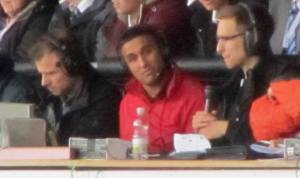 Jack Lester does the match commentary 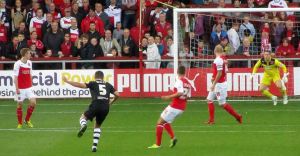 The referee has a word with Ryan Cresswell

Captain Cod’s challenge at half time! 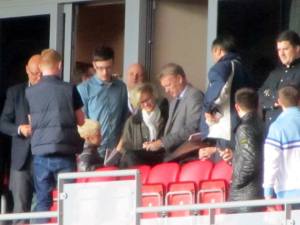 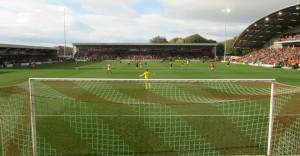 Liam Cooper jumps highest and puts the Spireites in front

The players celebrate the opening goal

Fleetwood prepare to get the game restarted

Cooper is the scorer 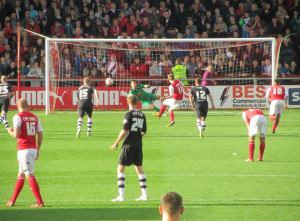 Jeff Hughes misses from the spot 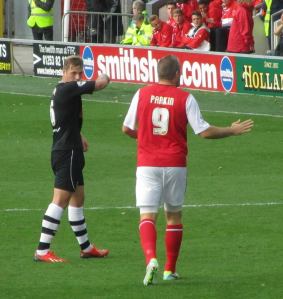 Jon Parkin joins the action in the final minutes 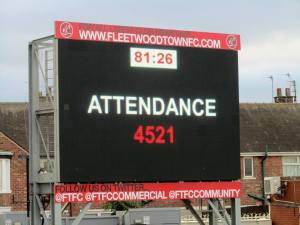 The attendance at Highbury 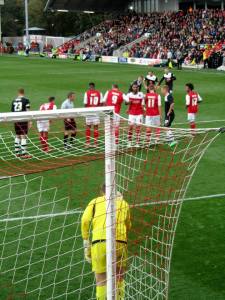 A final opportunity for Chesterfield 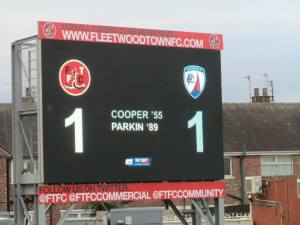 Back at the Proact after a long but enjoyable day