Jamie Vardy scored in an eighth consecutive Premier League game to give Leicester City victory over West Bromwich Albion in a five-goal thriller on my first ever visit to the Hawthorns.

The hosts had taken a first-half lead through Salomon Rondon’s header but a Riyad Mahrez brace and Vardy’s 11th of season gave the visitors a deserved 3-1 lead. Substitute Rickie Lambert converted a late penalty to set up an exciting finish, but the Baggies couldn’t find an equaliser and it was Leicester who took home the points to move up to third in the table.

The Saturday of Halloween provided me with an opportunity to move a step closer to completing the 92, as my team Chesterfield travelled to Fleetwood Town’s Highbury Stadium – a ground I had already visited with the Spireites back in 2013. West Bromwich Albion had been near the top of my ‘to do’ list for some time now, so with a relatively simple journey and very reasonable top flight ticket prices we decided that the Hawthorns would be our location for the afternoon.

Opened in September 1900, the almost-27,000 all-seater stadium has been home of the Baggies for 115 years. It holds the record as the highest above sea level in the top four divisions and has hosted two England internationals in it’s history, although the last of these took place in 1924.

We arrived in plenty of time to take photos and soak up the matchday atmosphere before taking our East Stand seats ready for West Brom, who had won their last two outings 1-0, to take on Leicester City who sat in 5th place heading into the contest after last season’s miraculous survival.

As many would have expected, it was Claudio Ranieri’s in-form side who made a dominant start to the game – Vardy twisting and turning before hitting the near post  in the best of the Foxes’chances in the opening half hour.

But largely against the run of play, the hosts opening the scoring in the 30th minute. Stephane Sessegnon’s corner was met at the near post by Rondon, whose header was too powerful to Kasper Schmeichel despite the ‘keeper getting his hand to the ball.

The Baggies held their lead until the interval, but three goals in twenty second half minutes put Leicester firmly in the ascendancy.

Twelve minutes after the restart, Mahrez restored parity by smashing home from close after meeting the cross of Marc Albrighton, who had been a threat from the wing all afternoon. And the Algerian international made it two just seven minutes later by slotting home from close range. Replays later showed he was in an offside position, which only added to the frustrations of the home fans who had seen a penalty shout waved away moments earlier.

However, despite being fortunate with some of the decisions, Leicester were still worthy leaders having largely dominated the contest and they increased their lead to 3-1 with 13 minutes to go. A neat one-two between Vardy and Danny Drinkwater left the England international racing through on goal and there was little doubt as the league’s top scorer found the net for the eighth top flight game in a row – moving just two games away from equalling Ruud Van Nistelrooy’s record.

Leicester’s third appeared to have put the result beyond doubt, but with six minutes left it was game on once again. Lambert stepped up and confidently slotted home from the spot after a foul by Nathan Dyer, setting up an exciting conclusion.

Despite piling on the pressure, West Brom couldn’t find that final golden opportunity and it was Leicester who deservedly earned three points to move them to third in the Premier League table, behind only Manchester City and Arsenal.

It was ultimately a disappointing afternoon for the Baggies supporters but as a neutral it was thoroughly exciting game, arguably the best of the day in the top division, adding to a great day visiting a new stadium. 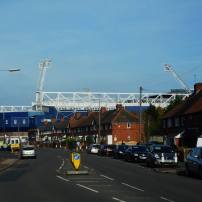 Our first view of the Hawthorns

A statue of Tony Brown 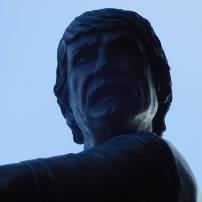 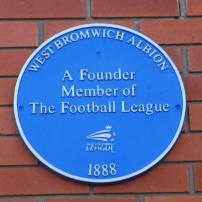 Retro kits in the club store 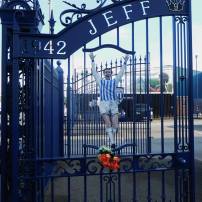 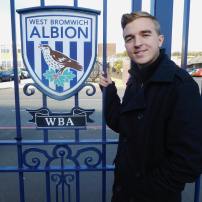 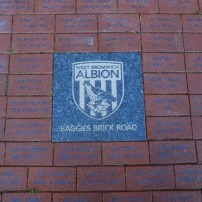 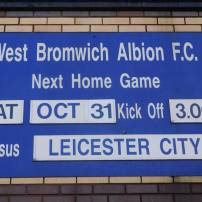 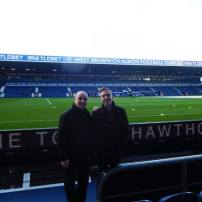 The Watterson’s at West Brom

Pre-match at the Hawthorns 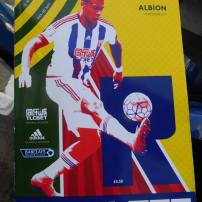 The man of the moment Jamie Vardy warms up

A young Baggies fan has a photo with the mascot

The two teams ready for the game 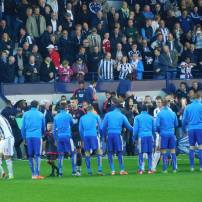 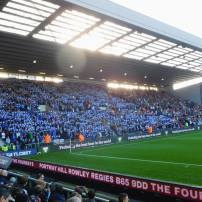 Opposing fans in the stand 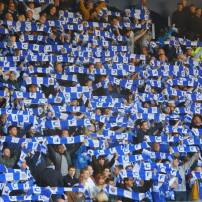 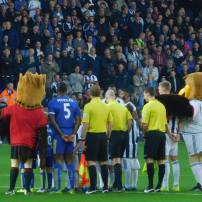 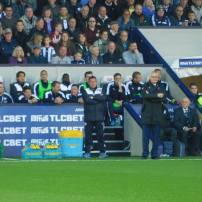 Claudio Ranieri and the Leicester dugout 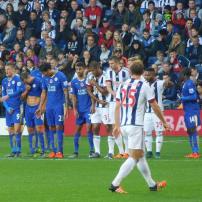 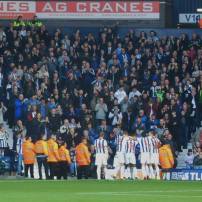 A West Brom fan celebrates in front of the travelling supporters! 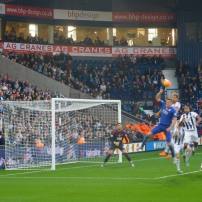 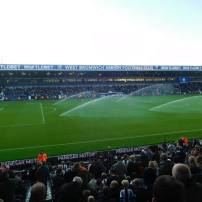 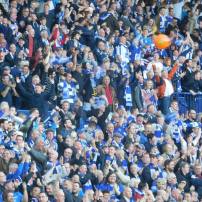 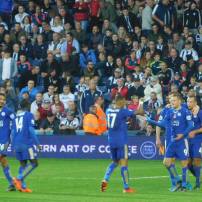 Jamie Vardy celebrates his 11th goals of the season

Rickie Lambert scores from the spot