On Sunday 26th January 2014, I went to Bramall Lane to watch Sheffield United play Fulham in the FA Cup 4th Round.

Following a trip to Manchester City yesterday, my FA Cup weekend double bill was completed with a trip to watch Sheffield United take on Premier League side Fulham. Had family ties not led me to being a Chesterfield supporter, then it is more than likely that I would have ended up supporting the Blades. Bramall Lane is actually my nearest football league ground and I have visited on a number of occasions for various matches. The opportunity to see a team so nearby take on top division opposition this afternoon seemed too good to turn down.

United headed in to this game as the clear underdogs, not only because of the two division gap but because their recent form had seen them slip back in to the League 1 relegation zone. However, they had already defeated Premier League opposition in the FA Cup this season, beating Aston Villa 2-1, so they were certainly not going to be any pushovers for Fulham this afternoon. The Cottagers themselves were languishing in the relegation zone of the top flight and had won just one league game in their last four, so they were looking to pick up some momentum against lower league opponents.

It was a cold and rainy winter’s afternoon in South Yorkshire and just over 16,300 supporters filled the home of the Blades in anticipation for this cup fixture. With chants of “United” and a tuneful rendition of the greasy chip butty song echoing around the stadium, referee Andre Marriner got the action under way at 1pm.

The early stages of the game were tense and scrappy as neither side could gain the advantage. Fulham opted for slow build up play with some neat passing football in the opening half hour, but they couldn’t find a way to break to the resolute defending of the Blades, who themselves looked dangerous going forward.

The deadlock was broken just after the half hour mark. Harry Maguire picked up the ball close to the centre circle before charging into the box, beating a number of Fulham players on his way. The defender then unleashed a strike towards goal that Chris Porter directed home from close range to bring joy to the home supporters.

United almost gifted the Cottagers a leveller shortly after when a misplaced pass in defence led to Muamur Tankovic playing Hugo Rodallega through on goal. Goalkeeper George Long came off his line and did enough to avert the danger, Fulham’s appeals for a penalty quickly being waved away by the referee.

The Premiership outfit came out in the second period desperate to avoid a shock exit and their task was made easier when Blades captain Michael Doyle was shown a straight red card for an off-the-ball incident with Chris David. Another blow for the Blades saw defender and goal creator Harry Maguire forced off with injury just after the break.

Being a man down meant an instant change of approach for the home side, who put men behind the ball in an attempt to hold on to their one-goal advantage. United still looked hugely dangerous on the counter however, and Ryan Flynn came close to doubling the lead as he bombed forward before firing at the legs of the Fulham goalkeeper.

Flynn continued to be a nuisance to the defenders and there were huge appeals for a penalty when he was brought down in the box by Aaron Hughes. However, the referee was having none of it as he immediately indicated for the United man to get back to his feet, much to the fury of the home support.

Fulham brought on Darren Bent and Adel Taarabt in an effort to find an equaliser as they piled on the pressure. Pajtim Kasami wasted a golden opportunity for his side by blazing a strike over the crossbar from inside the box before Rodallega did level the score in the 75th minute with a crisp shot in to the bottom corner.

By this stage it was virtually all Fulham as the Blades looked to cling on for a replay. Phillipe Senderos came inches away from breaking United hearts in the final moments as his header smashed the crossbar. In the dying moments, Darren Bent then earned his place on comedy-miss DVD’s nationwide as the ball fell to him just yards out in front of an open goal, but the striker somehow placed the ball wide.

Sheffield United battled magnificently and held on for a well-deserved replay at Craven Cottage. As a neutral, I hugely enjoyed the game at Bramall Lane this afternoon. It felt like a proper cup tie full of tension to the last moment. The Blades particularly impressed me with their determination, battling for the duration while always looking hugely dangerous on the counter. The replay is certain to be an exciting affair. 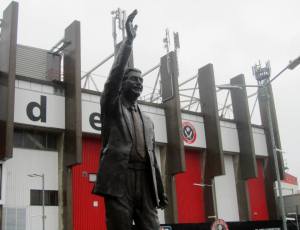 The BT Sport coverage is presented from the dugout 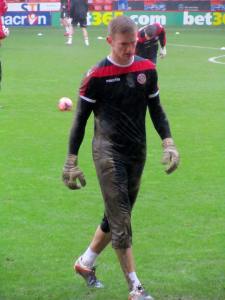 George Long gets a bit muddy in the warm up 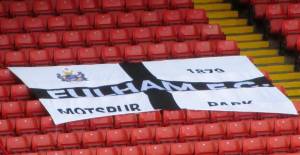 A flag on the away end

The Kop unveils a flag 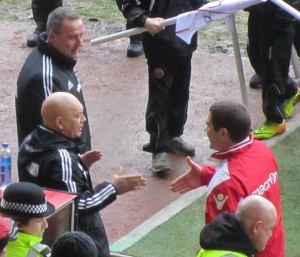 The Fulham line up 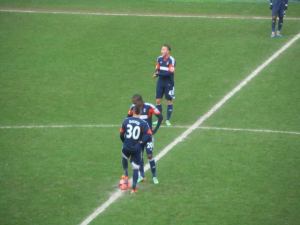 Fulham restart the game after falling behind

Harry Maguire is forced off through injury

His replacement s brought on 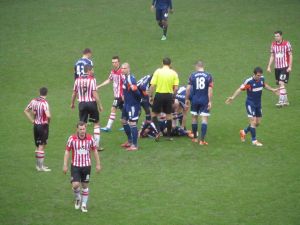 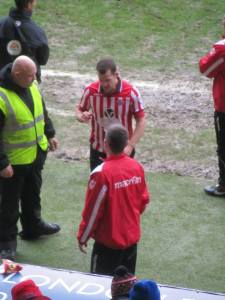 Fulham pile on the pressure

Adel Taarabt prepares to be brought on

Andre Marriner has a word with an angry Nigel Clough

The Blades hold out for a replay 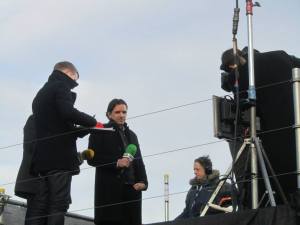 A ray of sunshine over Bramall Lane