On Saturday 1st February 2014, I went to the Proact Stadium to watch  Chesterfield play Bristol Rovers in League 2.

A chilly February afternoon in Derbyshire saw Chesterfield host Bristol Rovers in a battle of two teams at opposite ends of the table. Victory at York in midweek had seen the Spireites move to the summit of the League 2 table having lost just one of their last nine league matches. It was a very different story for the visitors who sat just three places above the relegation zone and came into this contest on the back of a home defeat to lowly Accrington Stanley.

This was Rovers’ second trip to the Proact Stadium and they were hoping for a better outcome than their previous visit, which ended in a 2-0 defeat. After a number of relatively successful seasons in the third tier, finishing as high as 10th place in 2009-10, the Pirates had gone on a downward spiral culminating in them, somewhat surprisingly, being involved in the League 2 relegation battle this campaign. However, a run to the third round of the FA Cup and victories against Exeter and Newport in the past month showed that John Ward’s side would be no pushovers for the Spireites.

Chesterfield boss Paul Cook named an unchanged side from the one that had left Bootham Crescent victorious on Tuesday night. This meant that top scorer Marc Richards remained on the bench, Eoin Doyle and January signing Dan Gardner leading the attack. For Rovers, there was one change with Chris Beardsley replacing Eliot Richards in the starting eleven.

Unsurprisingly, the league leaders started brightest as Rovers attempted to get men behind the ball early on. And it was the home side who opened the scoring after just five minutes, courtesy of Sam Morsy’s first goal for the Chesterfield. The midfielder, who joined in the summer from Port Vale, got on the end of Doyle’s cross and fired past Steve Mildenhall.

Chesterfield continued to dominate the play as they looked to build on their lead. Gardner, Paul Cook’s only permanent signing of the recent transfer window, saw a couple of wayward efforts go wide of the target. Meanwhile, Tendayi Darikwa caused numerous problems for Rovers as he kept charging down the wing and at the defence, who were forced to deal with a number of dangerous crosses from the winger.

The Pirates slowly began to grow into the contest and with 36 minutes on the clock, parity was restored. Lee Brown received the ball on the edge of the area and struck a magnificent effort in to the top corner, clipping in off the crossbar, to leave Lee with no chance. Not bad for a defender!

The leveller did not appear to dishearten the Spireites however, and just eight minutes later they were back in front. Gary Roberts’ low cross from the wing found Ollie Banks, who calmly side footed the ball in to the bottom corner to restore the home sides’ advantage.

Just two minutes after the restart, Doyle put distance between the two sides with Chesterfield’s third goal of the afternoon. Roberts was again the creator, nicking the ball off the toe of Parkes before playing Doyle through on goal – the Irishman making no mistake to score his sixth goal of the season.

Knowing only too well that a two-goal lead can be dangerous, the home side went in search of more goals to kill the game off. Banks almost added another, forcing a diving save from Mildenhall directly from a free kick.

The Spireites kept pushing until the very end – a goalmouth scramble almost leading to a fourth goal. But in the end the three goals were enough as Chesterfield ran out 3-1 winners on a relatively comfortable afternoon.

Defeat for Rovers saw them drop to 21st in the table, now just a single point from the drop zone. Meanwhile, the three points meant Chesterfield consolidated their place at the top of League 2.

Next up for Chesterfield is a trip to Glanford Park. The top two sides in the division, Chesterfield and Scunthorpe United, will go head to head in one of the biggest games of the season so far – victory moving one of them a massive step closer to promotion.

The players make their way on to the field

Spireites flag on the Kop 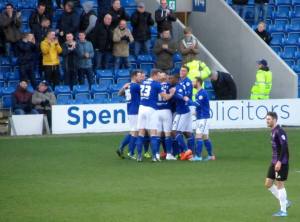 Evatt and Harrold battle for the ball 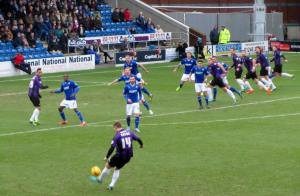 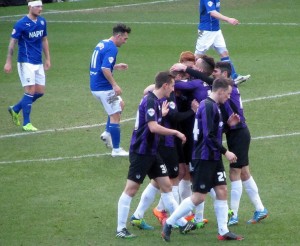 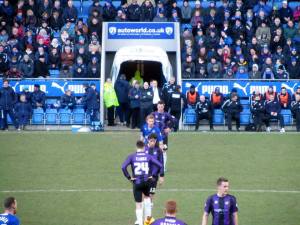 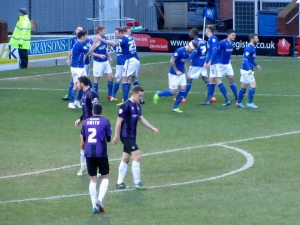 …and forces an excellent diving save 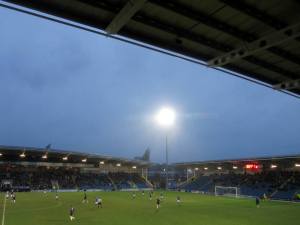