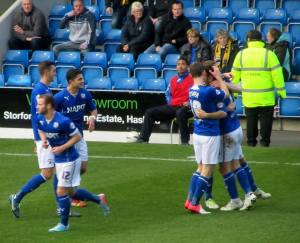 On Saturday 15th March 2014, I went to the Proact Stadium to watch Chesterfield play Oxford United in League 2.

My last game as a 17 year old was an important one as two sides in the top seven of the table face off at the Proact Stadium. Neither side came in to the contest in particularly great form. League 2 leaders Chesterfield had picked up just eight points from their last six games while today’s opponents, Oxford United, had failed to win in their last five matches and sat five points off the automatic places.

It was a bright day in Derbyshire and the game got off to a fast start. Just two minutes in, Chesterfield ‘keeper Tommy Lee was forced into action as he made an athletic diving save from Dave Hunt’s first time volley. The home side hit back quickly when Gary Roberts’ free kick flew just inches over the crossbar.

The Spireites took the lead inside the opening ten minutes. Playmaker Jay O’Shea was the creator as his low cross found Ollie Banks at the far post before 21-year old fired the ball into the bottom corner to break the deadlock. 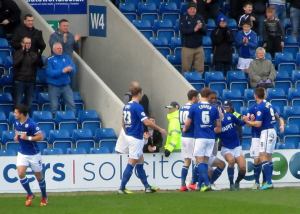 And eight minutes after opening the scoring, Chesterfield were gifted a great opportunity to put distance between the sides. A push in the box left the referee pointing to the spot and Roberts made no mistake as he slotted the ball home in front of the away end to make it 2-0

Roberts scores from the spot

An impressive first half from CFC almost ended with a third goal, this time from O’Shea, but a last ditch challenge from an Oxford defender denied the opportunity.

Oxford started the second period with a great opportunity to pull a goal back when Ryan Williams charged through on goal, but he couldn’t remain calm and blasted his strike at the legs of the goalkeeper.

With 20 minutes to play, Mason Bennett replaced O’Shea to create a small moment of history for myself. Born in July 1996, Bennett, who is on loan from Derby, became the first player younger than myself that I have seen play for Chesterfield first team. 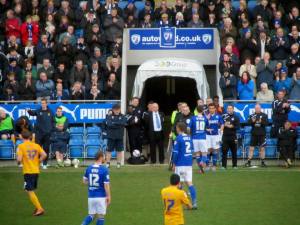 Bennett is brought on, becoming the first player I’ve seen play for Chesterfield that is younger than myself!

Chesterfield were in full control by now and Ian Evatt came close with a header that clipped off the crossbar before falling to safety. Oxford’s battle was made increasingly difficult when they were reduced to 10 men. Banks was recklessly sliced down by Tom Newey and the ref was left with no choice but to show the red card.

A red card is shown

Within minutes Oxford were left with just eight men on the field. A second yellow for Michael Raynes was followed by Johnny Mullins being stretchered off after all 3 U’s substitutions had been used.

With so much space for Chesterfield to play in, they added a third in stoppage time. Roberts chipped the ball over the helpless goalkeeper before celebrating with the fans, sealing a victory that saw the Spireites remain top.

Roberts makes it 3-0 late on