On Tuesday 25th March 2014, I went to the Proact Stadium to watch Chesterfield play Morecambe in League 2.

Chesterfield’s 40th league fixture of the 2013/14 campaign, and my first football match since turning 18, saw Morecambe visit the Proact Stadium. The  Shrimps are something of a bogey side for Chesterfield. Not only have the Spireites only managed to beat them once in twelve meetings, but today’s visitors had never lost a game in Chesterfield. The reverse fixture this season at the Globe Arena had been a dramatic one with Chesterfield leading 3-0 at half time before ultimately losing the game 4-3.

The Spireites had slipped off the top of the League 2 table for the first time since January after a woeful run of form that saw them win just one of their last six games. Today’s visitors were sitting firmly in mid-table with some inconsistent form. The hosts desperately needed to pick up three points in their final Tuesday evening fixture of the campaign to keep up with the league leaders. 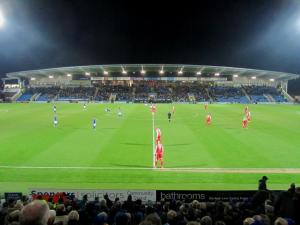 The game started slowly in front of a crowd of less than 5,000. Tommy Lee was forced in to a couple of saves as Tony Diagne and Ryan Williams both got efforts on target from corners. At the other end, Jay O’Shea hit Chesterfield’s first chance over the crossbar before turning creator as his pass found Mason Bennett, whose low cross in front of goal was just inches away from being turned in by Eoin Doyle.

The Irish midfielder was in fantastic form early on and he put Doyle through on goal with a great chance, but he couldn’t keep his effort on target. And it was O’Shea who put Chesterfield ahead in the 19th minute. Doyle was the provider as he found his fellow countryman with a cross, leaving O’Shea with the simple task of nodding the ball home.

The home side started the second period strongest with Doyle forcing former Spireites goalkeeper Barry Roche into an excellent save. Doyle quickly forced the ‘keeper into another save as Chesterfield dominated the game. A barrage of shots were fired at the Morecambe goal with efforts from O’Shea, Marc Richards and Jimmy Ryan all coming close but the Shrimps defence held on to the one goal deficit strongly.

Kevin Ellison had one of Morecambe’s only chances of the second half but failed to truly threaten. Sam Morsy almost added a second late on with a strike that hit the woodwork, but it didn’t matter as Chesterfield ran out 1-0 winners and remained in the automatic places. 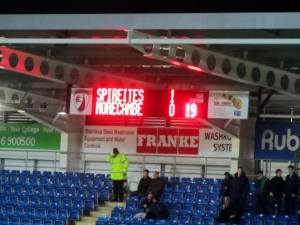 Next up for the Spireites is a break from League 2 as they travel to Wembley on Sunday for the Johnstone’s Paint Final. I can’t wait!