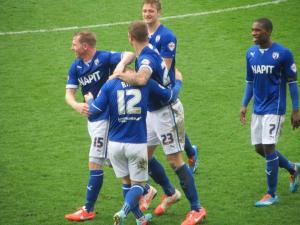 On Saturday 5th April 2014, I went to the Proact Stadium to watch Chesterfield play Newport County.

After a day out at Wembley in the Johnstone’s Paint Trophy last weekend, it was back to league action this afternoon for Chesterfield with the visit of Newport County. It was the Exiles’ first visit to the Proact Stadium and their first visit to Chesterfield for a league fixture since 1986. Newport, who were promoted to the football league last season, were also the first Welsh opposition I had ever seen the Spireites play.

The Spireites headed into today’s game against 16th-placed Newport in inconsistent form. Two victories and two defeats in their last six league matches saw Chesterfield sit in third place, five points clear of the play offs. Meanwhile, the Exiles were in far better form than their league standing suggested with just one loss in ten games. This was going to be no easy task for the home side on a cloudy afternoon in Derbyshire.

A minute’s applause took place before kick off for David Blakey. Blakey is Chesterfield’s record appearance holder, playing for the club a remarkable 658 times in all competitions. The former centre half sadly passed away earlier in the month at the age of 84 and the fans recognised his service to the Spireites with a respectful applause.

A minutes applause for David Blakey

It was an even contest in the early stages. Shaun Jeffers and Jay O’Shea each sent a shot just wide of the target for their respective sides in an opening 20 minutes that saw few opportunities. Jeffers forced the first save of the game soon after when his strike was kept out by an athletic Tommy Lee. 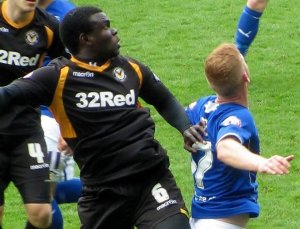 The Spireites began to have the better of the play as the half wore on but they failed to truly threaten, Danny Kearns and Jimmy Ryan both sending efforts wide of Ian McLoughlin’s net before the break.

Just four minutes into the second period and the deadlock had been broken. A half-cleared corner fell to Ryan and the midfielders attempted cross back towards the six yard box ended up fooling everybody and looping into the back of the net. It was a fortunate goal for the hosts but potentially a very important one.

This advantage gave Chesterfield a boost and they became more confident. O’Shea had a couple of good opportunities to double the lead, first sending a shot inches wide of the post before forcing a save from McLoughlin who did well to keep the deficit at 1-0.

And the Spireites had the ball in the net twice more in a matter of moments. Eoin Doyle and Kearns both slotted the ball home from close range but both strikes were quickly ruled out due to the linesman’s offside flag.

Chesterfield look to add to their lead

Substitute Marc Richards should have put the game beyond doubt with less than ten minutes to go. Ryan played the forward though on goal but his attempted lob fell comfortably into the arms of the keeper, much to the dismay of many home supporters.

Moments later and Newport snatched an equaliser. Max Porter hit an unstoppable strike past Lee from around 25 yards, leaving the goalkeeper with no chance and levelling the scores with just seven minutes to go. Chesterfield battled desperately to find an important winning goal, but it never came and the result saw the Spireites remain just one place above the play off spots.