On Friday 18th April 2014, I went to the Proact Stadium to watch Chesterfield play  Exeter City in League 2.

Things were really hotting up in League 2 as the end of the season got closer. The penultimate home fixture of the campaign for Chesterfield saw strugglers Exeter City visit the Proact Stadium.

The Spireites were in a very positive position coming into the contest, having been the only top six side to pick up a victory last weekend. This meant they were just two points off the top of the table while the Grecians were within touching distance of the relegation zone so a victory was imperative for both.

A big day in Chesterfield’s season

A beautiful sunny day played host to an entertaining and open game. Less than two minutes in and it had its first chance, Ian Evatt’s header being blocked on the line by the Exeter defence.

Both sides had plenty of possession and looked for an early advantage, knowing the importance of this afternoon’s contest. Going against the form book, it was the southern side that took an early lead in the 18th minute. Matt Grimes’ free kick took a huge deflection off the Chesterfield wall and left Tommy Lee with no chance as it flew into the net.

Eliot Richards forced a stop out of Lee as the Grecians looked to add to their lead, but the visitors seemed quite content to defend their lead against one of the sides battling for the league title. This caused a fair amount of frustration for the Spireites – Sam Hird, Marc Richards and Dan Gardner all seeing hopeful efforts kept out.

Richards had another opportunity just before the break but his strike was deflected away from goal and it was Exeter that headed down the tunnel with a 1-0 half time lead.

Chesterfield manager Paul Cook made two changes at the break in an effort to rejuvenate his team. The experienced Ritchie Humphreys replaced Nathan Smith while the boss brought on a third striker, Armand Gnanduillet, in place of Gardner.

Armand Gnanduillet comes on at the break

With the Spireites focusing all their efforts on attack, they were almost left wanting at the back. John O’Flynn found himself charging through on goal but Lee was in excellent form to charge down and block the shot.

The home sides hopes of a turnaround were dampened somewhat with just over ten minutes to go as Sam Morsy received a straight red card for a two-footed tackle. Exeter took advantage of this extra man as they looked to put the result beyond doubt, Scott Bennett’s header finding the woodwork.

However, in the 78th minute the referee gave Chesterfield hope. Eoin Doyle was brought down in the box and the man in charge pointed straight to the spot. The Irishman getting up to score from the spot and level the game at 1-1. 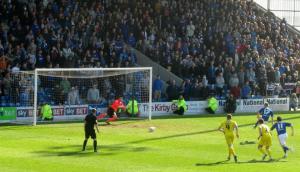 Eoin Doyle equalises from the spot

Both teams battled for a late winner, Lee having to be on top form to keep Bbennett’s stoppage time effort out. But in the end there was nothing between the two sides. While the Spireites will have been disappointed to drop points against a struggling side, other results meant it actually moved them up a place into second!

Just three games left to go and it’s getting very exciting at the top of the League 2 table. 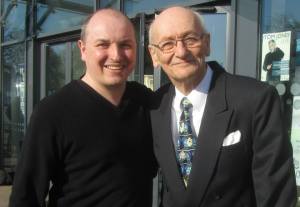 My Dad with his Uncle Mike Watterson after the game. Former Chesterfield chairman Mike was making his first visit to the Proact today.