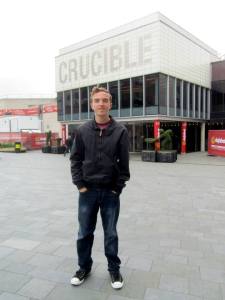 On Sunday 20th April, I went to the Crucible Theatre to watch Ding Junhui play Michael Wasley in the first round of the 2014 World Snooker Championship.

It’s that time of year again! Every April, my hometown is Sheffield welcomes the World Snooker Championships to the Crucible Theatre. Today, day two of the tournament, saw my first visit of this years event and my 10th consecutive championship.

The weather didn’t quite live up to the glorious opening-weekend sunshine of previous years. However, it was still a decent day and there is always a buzz of excitement in Tudor Square during the championships.

Me and my Dad, who has been to the tournament every year since it first moved to Sheffield in 1977, had our mandatory walk around to soak up the atmosphere ahead of the session. We passed the big screen which shows the action live for those not fortunate enough to have tickets while the cuezone was located in its usual position inside the Winter Gardens. A crowd formed here to watch the BBC punditry team of Hazel Irvine, Steve Davis and John Parrott in the studio alongside the famous trophy. Shortly before heading inside the venue, we passed 2005 World Champion Shaun Murphy, who recognises me these days and stopped for a yearly photo!

As the afternoon session starting time approached, we made our way through the Crucible foyer and took our seats in the second row. The venue is generally accepted as the home of Snooker and it is a venue like no other. Every newcomer to the venue always points out how small the venue is, particularly during the two-table set up, and with a capacity of less than a thousand there is a magical atmosphere for snooker’s showpiece event.

MC Rob Walker introduced the four players, who received a rapturous applause from the Crucible crowd. On the table I was watching was Ding Junhui, one of the tournament favourites and winner of a record five ranking events this season. His opponent was Crucible debutant Michael Wasley, who had defeated Robert Milkins in a black ball decider to qualify for the first ever time. On the other side of the screen was twice World-finalist Ali Carter against another debutant, Xiao Guodong.

Ding stole the first frame of the match. Breaks of 45 and 25 were enough to put him 1-0 ahead of the debutant had made a half-century. But Wasley’s confidence wasn’t knocked and he took the next two frames before a break of 70 from Ding meant it was level at 2-2 at the interval.

A third half-century from Wasley put him 3-2. This was followed by a very scrappy 40-minute frame that could easily have gone the qualifiers way, but the man from China stole it. This gave Ding a massive boost and he went on to win the next three, including a superb break of 136, to end the session leading 6-3 and put himself in a great position.

Wasley had played some impressive stuff and with the nature of the scrappy frames, he could have easily led 5-1 at one point so he will have felt frustrated to have ended the session trailing by such a margin. Over on the other table, Carter had been given a big scare by Guodong but eventually won 10-8 to book his place in Round 2.

It was great to be back at the Crucible for my tenth consecutive and eleventh year in total. It is the best place in the world to watch snooker and this time of year is always the most exciting for fans of the game. There isn’t long for me to wait until my next visit as I return on Wednesday evening to watch Mark Davis play Dominc Dale. 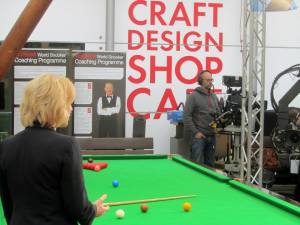 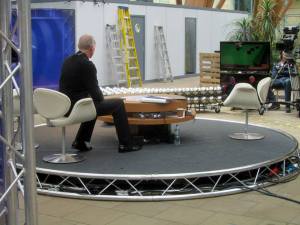 Steve Davis in the studio 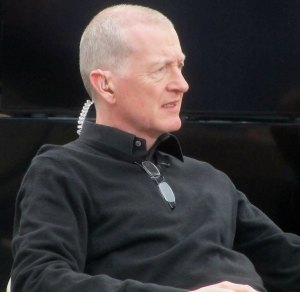 What they’re all playing for

The lady on the trophy

The Watterson’s at the Crucible

with one of Snooker’s biggest fans Chris (aka The Statman) 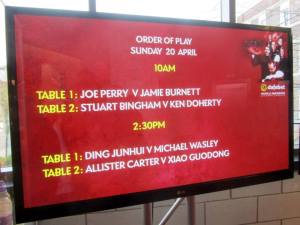 The home of snooker

Inside the venue for the 10th consecutive year 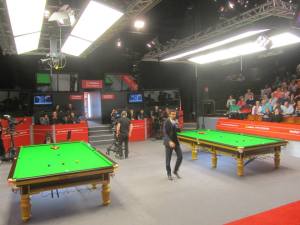 Rob Walker does his thing! 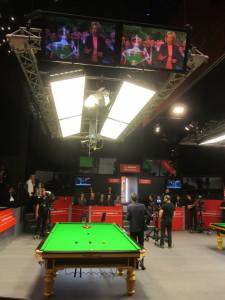 My view of the table 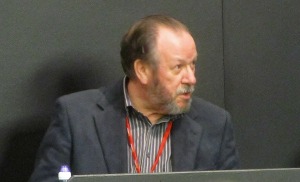 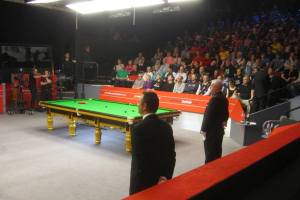 The referees are introduced 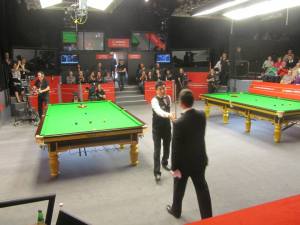 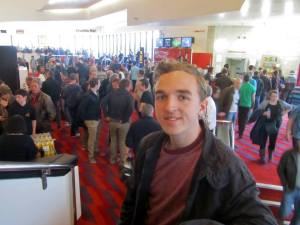 In the foyer at the interval

The players dressing room, being auctioned for charity 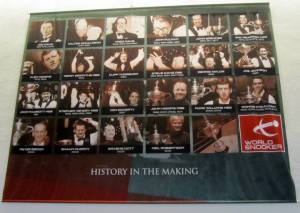 Back after the interval