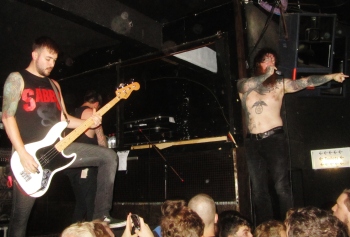 ‘Feed The Rhino’ lifted the roof off of Sheffield’s Corporation on the penultimate night of their UK tour following the release of their latest album. In front of a rampant sellout crowd on 23rd October 2014, the hardcore rockers from Kent tore through a set of both old and new material, including tracks from their newest LP ‘The Sorrow and The Sound’ released in June. There was a buzz of anticipation around the venue as the doors opened at 7pm. With a line up including some of the most energetic and entertaining live bands of the genre embarking on one of the steel city’s grimiest and most intimate rock venues, it was always going to be a wild night. The evening’s support came from ‘Grains’, ‘Baby Godzilla’ and ‘Night Verses’. All three support act’s performed well and got the crowd buzzing ahead of the main event. Local’s ‘Grains’ got the night off to a good start, while American band ‘Night Verses’ were notable for such an impressive showing on their Sheffield debut and are clearly a very exciting prospect.

However, it was the strangely named ‘Baby Godzilla’ that simply stole the show. The Nottingham band list their genre as “General Extreme Noise” on their official Facebook page – but that description doesn’t tell the half of it! Second on stage, the four-piece made literally every inch of the room their own. The guitarists were stood on the speakers, charging around the floor, dragging their amps from the stage and even rocking on top of the bar! The whole performance sent the whole crowd into an absolute frenzy and it is by far one of the most insane half-hours of live music you are ever likely to witness.

After some excellent and some crazy performances from the supports, it was finally time for the main event – ‘Feed The Rhino’. The brutally powerful sounds of the instruments filled the tightly compacted room. The first scream from vocalist Lee Tobin was then the signal for packed crowd to go mental.

Two new songs, “Behind The Pride” and “Deny and Offend” kicked off the hour-long set. The performance featured tracks from all three of the band’s albums, including the title tracks from the two previous releases – “Mr Red Eye” and “The Burning Sons”. ‘Tides’ from FTR’s second album showcased the fantastic range of frontman Tobin, who performed a beautiful verse of clean vocals at the beginning of the track before once again engulfing the room in an explosion of sound with his gut-wrechingly powerful screams. The penultimate track was the new album’s opener ‘New Wave’, which proved a particular favourite with the Sheffield crowd who quickly formed probably the craziest moshpit of the night.

Tobin then anounced that there was just one song left and urged everyone in the audience to “just go for it.” After a heartfelt thank you from the frontman, he then informed the crowd to sit down. It was tough task in the cramped room, but they eventually managed it before leaping up in to the air and going berserk one final time to the sound of the final song ‘Flood The System’. After a fantastic and memorable night in Sheffield, Feed The Rhino and co. now roll on to Southampton on Friday for the final date of the eight-day UK tour.

An amazing performance from FTR