Hailing from Brighton, ‘The Kooks’ currently consists of Luke Pritchard, Hugh  Harris, Peter Denton and Alexis Nunez. The indie rock band was formed in 2001 and remarkably signed from Virgin Records only three months later. They hit the mainstream with the release of their debut album ‘Inside In/Inside Out’, which was a huge success and went quadruple platinum in the UK within a year.

Their second album ‘Konk’ went straight to number one in the UK album charts, but after a mixed reception for heir third album ‘Junk Of The Heart’, the band talk some time away. After three years, they returned with their fourth album ‘Listen’ in September and are currently touring the length and bredth of the UK in support of this new release.

The seventh night of the tour saw them embark upon Sheffield’s O2 Academy. The show was a sellout well before the day of the show and there was a huge anticipation for tonight’s concert.

Irish rock band ‘Walking On Cars’ were providing support for the tour and they got the evening off to a decent start. They kicked off with ‘Tick Tock’ and also performed their newest single ‘Always Be With  You’, which is released on 8th December, during their half hour set. The five piece did a good job of warming up the crowd, getting them to sing and clap along to various songs. But one of the most notable aspects of their performance was the rather unique dance moves of the frontman Patrick Sheehy!

A massive cheer greeted ‘The Kooks’ as they hit the stage at 9pm. They opened with ‘Around Town’, the second single from the new album, before thrilling the steel city audience with a couple of tracks from their debut album – ‘See The World’ and ‘Ooh La’.

The Kooks hit the stage

The impressive setup saw screens all over the stage and this backdrop looked particularly effective as images of various iconic London sites covered the stage as the band performed the song ‘It Was London’.

‘Bad Habit’ and ‘Down’, a couple more new tracks, followed before the crowd went absolutely crazy as the opening chords of ‘She Moves In Her Own Way’ burst through the amps. One of ‘The Kooks’ most famous songs, it got the audience moving more than ever before and nearly everyone in the room belted out the lyrics, almost drowning out the singing of vocalist Pritchard. 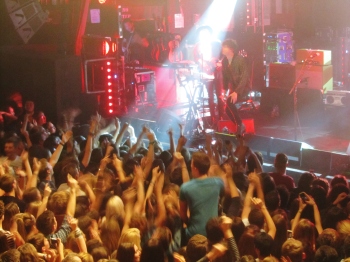 After another one from the first release, ‘Eddie’s Gun’, the frontman brought out the acoustic guitar and serenaded the crowd with a couple of beautiful songs. This included ‘Seaside’, the very first track from their debut album. It was a magnificent sight as the spotlight shined down on Pritchard while the whole room offered backing vocals to this classic song.

“Do you want to go to the seaside?”

The next six songs saw the four-piece play music from all four of their studio albums, including one of their biggest hits ‘Always Where I Need To Be’. Following ‘Junk Of The Heart (Happy)’ the band left the stage, but they quickly returned for the inevitable encore as the audience chanted “We want more” over and over.

The first of the encore was ‘See Me Now’ – a song written as a letter to the Pritchard’s father, who passed away when the frontman was young. It was a truly touching moment as Pritchard took to the keyboard and sang to the mesmerized audience. 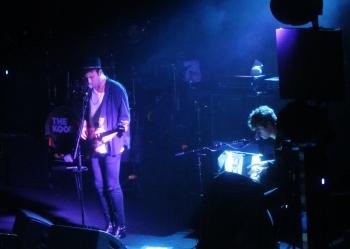 The energy was then lifted once again by these outstanding performers, who played before ”Sweet Emotion’ before sincerely thanking the crowd and closing with another of their hit songs ‘Naive’.

‘The Kooks’ had shown in this 90 minute performance why they have been so successful in their 13 year career. With a range of musical talent, they can pull of everything from powerful rock hits to emotional ballads and it all made for a superb performance.