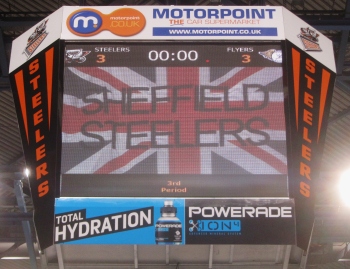 Sheffield Steelers managed to fend off a dramatic late comeback from Scottish opponents Fife Flyers to book their place in the Play-Off finals weekend in Nottingham with a 6-5 aggregate victory on Sunday 29th March 2015.

This event was a first for me personally, as despite being a big sports fan and having one of the nations best Ice Hockey teams on my doorstep, I had never attended one of their games! So I decided to head to the Motorpoint Arena for their final home match of the 2014/15 season to find out what it is all about.

The Steelers were formed in 1991 and have gone on to win various titles, becoming known as one of the best teams in the UK. They currently play in the Elite League – the highest level of Ice Hockey in the UK and  the only sports league to have representation from all four Home Nations.

The league consists of ten teams and the top eight in the regular season advance to the play-offs. The Steelers were victorious in last season’s play offs – a feat they achieved for the fourth time, and followed this up by finishing top of 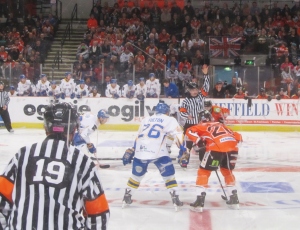 The Steelers won the first leg 3-2

the regular season standings this campaign with an impressive record of 35 victories in 52 games.

With the regular season, which got underway in September, now complete it was time for the play offs. This weekend saw the quarter-finals take place and for the Steelers, it was the UK’s oldest professional team – the Fife Flyers – who stood between them and the last four.

The first half of the two-legged tie had taken place at Fife Ice Arena the previous day – Robert Dowd’s goal just 34 seconds from the end giving the Steelers a 3-2 victory and an important goal advantage heading into the home leg this afternoon. 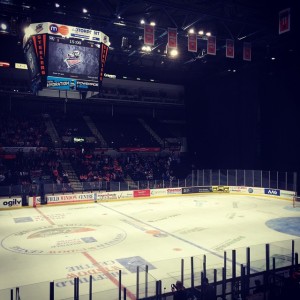 Sheffield Motorpoint Arena, the largest venue in the Elite League

There was great anticipation inside Sheffield’s Motorpoint Arena, by far the largest venue in the league, as the expectant fans awaited the 5 o’clock kick off. After a lengthy build-up and singing of the national anthem, the referee got the action underway.

Ice Hockey games are split into three sections of 20 minutes, with a 15 minute interval between each.

The Steelers were clearly looking to put distance between the sides early and they did just that as Mathieu Roy, the regular season top scorer, found the net just over a minute into the game.

The early moments saw a scrappy, stop-start affair, but once the action began to flow it was clear that the home side were in complete control against opposition that have never finished higher than 7th since joining the Elite League in 2011.

On 14:37, it was 2-0 to the Steelers courtesy of Dowd’s goal. It remained this way until the end of the first section which was the least the Sheffield side deserved after a dominating performance.

Following a 15-minute break that included entertainment from mascot Steeler Dan, the players returned to the ice. The Sheffield crowd was once again brought to life after a quiet opening to the second period when Dowd scored another to make it 3-0 and put Sheffield into a seemingly unassailable 6-2 aggregate lead.

Fife did pull a goal back just two minutes later, but they were struggling to be a major threat despite creating nearly as many opportunities as their opponents. The frustration really began to tell for the visitors and they had three men sat in the penalty box as the horn signaled another break.

There was joyous atmosphere inside the arena as the third and final period got underway, with various chants echoing around the venue including ‘campeones’ from the joyous Steelers supporters.

Fife Flyers pull it back to 3-3

But this party atmosphere was quickly dampened as the Flyers piled on the pressure in the final period. Jordon Fulton’s goal at 48:40 made it 3-2 before Danny Stewart scored with five minutes to go to leave the visitors needing just one more to take the tie into overtime.

Timeouts were called by both coaches during a tense final few moments. Roared on the the passionate travelling support, the Flyers threw everything at their opponents in the hopes of capturing an unlikely victory. But the Steelers stayed calm and managed to see out a dramatic conclusion to scrape through 6-5 on aggregate, much to the relief of the majority of those in attendance.

The finals take place at Nottingham’s Capital FM Arena next weekend (4th/5th April) and next up for Sheffield Steelers is a semi-final meeting with Hull Stingrays. The Steelers will be hoping for a repeat of last year’s play off victory, where they defeated Belfast Giants in a dramatic overtime final to lift the title.

Finally, on a personal note I thoroughly enjoyed the experience of my first live Ice Hockey match. The atmosphere was excellent and the action highly entertaining, particularly in a dramatic final period that left you on the edge of the your seat!

Good luck to the Steelers in the play offs and I will certainly be to the Motorpoint Arena to watch them in action again next season.