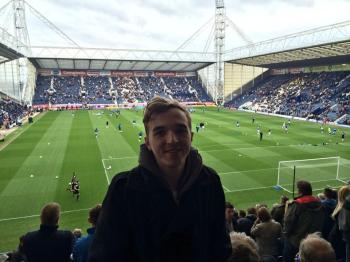 Chesterfield’s magnificent campaign came to an end on 10th May 2015 as Preston North End booked their place in the League 1 play off final.

A brace from Jermaine Beckford – including a wonder strike from the halfway line, and a penalty from Joe Garner were enough to earn the home side a 3-0 victory and reach Wembley.

Chesterfield’s season came to a head this afternoon at Deepdale. Despite trailing 1-0 to Preston, the Spireites headed to the Lancashire in high spirits knowing that they had performed well in the first leg on Thursday night and that they still had a chance of reaching Wembley for the third time in four years.

However, it was going to be no easy task against a side that had only missed out on automatic promotion on the final day of the season, pipped to the post by MK Dons.

More than 15,000 fans inside the home of Preston North End created a tremendous atmosphere for my first visit to the stadium and one of the most important games in my life as a  Chesterfield supporter.

Chesterfield got off to a fast start and almost levelled the tie in the first minute, Sam Clucas’ effort curling just wide of the far post.

With all three of Chesterfield’s ‘keepers now injured, they had been forced to make an emergency loan singing in the form of Joe Murphy from Huddersfield Town. But it took over 20 minutes for the Lilywhites to challenge to stand-in goalie – Paul Gallagher’s long-range hit forcing a comfortable stop.

A two-minute spell of football proved to be the most important of the whole tie. Sam Morsy played Clucas through on goal and the forward looked certain to score, but couldn’t hold his nerve and blasted it straight at Sam Johnstone.

Preston then went straight down the other end and broke the second leg’s deadlock. A free kick into the box fell to Beckford, who unleashed a brilliant strike with his back to goal that left the goalkeeper with no chance.

At 2-0 down in the tie and away from home, it was always going to be a difficult task for the Spireites from here.

The visitors battled valiantly in the hope of launching a comeback, but with just over an hour gone it was all over. Goalkeeper Murphy brought down ex-Spireite Daniel Johnson in the area and the referee immediately pointed to the spot – top scorer Garner making no mistake from twelve yards.

There was no doubting which side was heading to Wembley now and with the fans already preparing for their pitch invasion, Beckford rounded off the Lilywhites victory with one of the goals of the season, as he lobbed the ‘keeper from near the halfway line in remarkable fashion.

It was a disappointing end to Chesterfield’s campaign. Whilst they had matched Preston in many areas of the pitch, up front they simply could not compete with the likes of Garner and Beckford.

However, there was no doubting that all in all it was a great achievement for Chesterfield to finish in the top six having only gained promotion to the third tier the previous season.

Whether this will be repeated next season remains to be seen, as some sad news regarding the departure of manager Paul Cook to Portsmouth announced on social media almost straight after the final whistle.

But this was Preston’s day as there fans took to the Deepdale pitch to celebrate booking their place at Wembley, where they will meet either Swindon Town or Sheffield United for a place in the Championship.