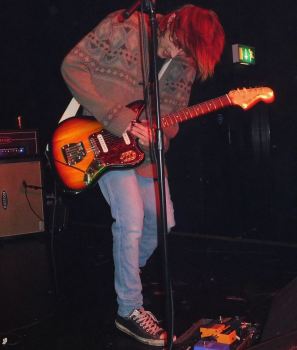 For a generation of Nirvana fans (myself included), the tragic death of Kurt Cobain in 1994 meant they never got the chance to see one of their favourite bands perform live.

Despite criticisms from some people, the great thing about tribute acts is they offer an opportunity that would otherwise not be possible for many fans.

The chance to witness live the likes of Nirvana, The Beatles, The Doors and many other legendary rock bands is now only available thanks to the efforts of some tremendous tribute artists, such as Novana.

And almost exactly a year on from their last visit, Novana returned to Sheffield to brilliantly recreate the Nirvana live experience for the steel city crowd.

To make the evening even better from grunge music lovers, support came from ‘Pity The Foo’, who rocked through a 13-song setlist in tribute to Nirvana drummer Dave Grohl’s other band ‘Foo Fighters’…you may have heard of them!

With the real thing well-underway on their stadium tour of the UK, ‘Pity The Foo’ performed the Foo’s biggest hits including ‘All My Life’, ‘Times Like These’, ‘Monkey Wrench’ and ‘Best Of You’ before closing with ‘The Pretender’ in front of a small but joyous crowd.

While probably not the best Foo Fighters tribute act out there, ‘PTF’ still provided an entertaining rendition of Grohl and co’s music, warming up the crowd perfectly for the main attraction – Novana!

The tribute trio burst onto the stage with ‘Radio Friendly Unit Shifter’, in the similar powerful fashion that Nirvana had done at the 1993 Live & Loud performance in Seattle.

And from there on, they charged through a dream setlist with impeccable attention-to-detail, recreating the every sound and characteristic of a Nirvana live performance.

‘Breed’, ‘Aneurysm’ and ‘Drain You’ offered a powerful opening as James Cooper (Kurt) flung himself and his left-handed guitar around the stage with the same care-free attitude portrayed by Cobain in the 90’s.

All the big-hits were performed, such as ‘Come As You Are’, ‘Lithium’ – which the frontman told the crowd they should “have a dance” to – ‘About A Girl’, ‘Heart Shaped Box’ and ‘In Bloom’ to name just a few!

Nirvana’s most well-known hit ‘Smells Like Teen Spirit’ was dedicated to an 8-year old boy on the front row, who had requested it as Cooper came over to greet him before the show – a particularly nice touch from the band.

Meanwhile, a particular highlight came with the song ‘Polly’ – beginning with the quiet, traditional version of the song before bursting into a room-shaking ‘New Wave’ version for the final verse.

Cooper also provided the crowd with a small and unexpected gem, as he played the unreleased track ‘Opinion’ while bassist Sam Howell (Krist) tuned up his guitar – after telling a “14+” joke to the crowd!

Following many requests throughout the evening, the band performed ‘Floyd The Barber’ from the debut album ‘Bleach’. ‘Rape Me’ and ‘Frances Farmer…’ followed from ‘In Utero’, before the trio took a bow and left the stage.

But they weren’t done with the Sheffield crowd just yet! Rob Burgess (Dave) returned and informed the crowd that they had to get the room shaking so loud that ‘De La Soul’ (the band performing in the main room) could hear them!

The trio then came back for a final encore as they powered through ‘You Know You’re Right’ – the last song recorded by Cobain, ‘Love Buzz’ and finally ‘Territorial Pissings’ before leaving the stage in true destructive Nirvana style!

Novana are easily one of the best tribute bands out there and for fans of Cobain and co, they are simply an unmissable experience. The recreation of the live performance, sound and vocal power of the real thing is near-perfect and as a big fan of Nirvana personally, I cannot praise their efforts highly enough!