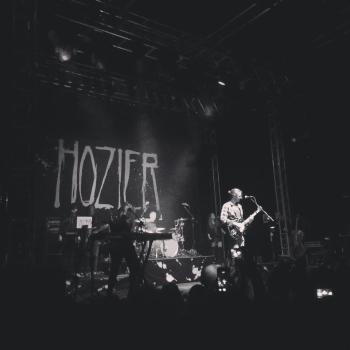 Hozier thrilled the crowd at Leeds’ O2 Academy on Thursday 28th May 2015 with a magical performance.

Andrew Hozier-Byrne, best known as Hozier, has seen a meteoric rise to fame. Despite only releasing his first EP in 2013, and his self-titled album a year later, he has already become one of the biggest names in music right now.

His hit track ‘Take Me To Church’, which he wrote in his parents attic whilst still a struggling musician, has gone on to become number one in twelve countries and has played a major role in his recent success.

Fresh from a performance at Radio 1’s Big Weekend alongside acts such as Foo Fighters, Taylor Swift and Muse, Hozier headed to Leeds on Thursday night having already performed shows in London, Manchester and Glasgow this past week!

Support for the evening came from Wyvern Lingo, a soulful Irish trio made up of Karen Cowley, Saoirse Duane and Caoimhe Barry – their warm-up set including tracks from their EP ‘The Widow Knows’.

The entrance of Hozier on to the O2 Academy stage was greeted with a huge cheer from the sellout crowd, and the Irish musician instantly got them singing with ‘Angel of Small Death and The Codeine Scene’, followed by the title track from his second EP ‘From Eden’.

Highlight’s from the show included a particularly beautiful rendition of ‘Someone New’ and an angsty ‘It Will Come Back’. The singer then invited Alana Henderson, who was performing Cello and backing vocals through the evening, to join him on lead for a mesmerising performance of the chilling track ‘In A Week’

An enjoyable cover of ‘Illinois Blues’ by Skip James raised the mood of the room and the evening seemed to fly by as Hozier played a few more tracks, finally blasting out ‘Take Me To Church’ before leaving the stage

The inevitable encore began with an acoustic solo of ‘Cherry Wine’, before Hozier informed the crowd that they were going to have a little fun now – performing an intirguing cover of ‘1 Thing’ by Amerie.

‘Work Song’ from his self-titled debut album then brought a magical evening to an end, Hozier showing that he is at the top of his game right now and leaving the Leeds audience delighted with what they had witnessed this evening.