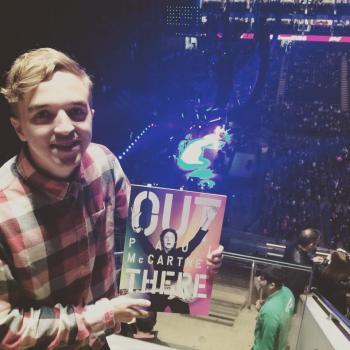 Sir Paul McCartney rocked London solo for the 50th time in his incredible career on a truly unforgettable night at the O2 Arena on Saturday 23rd May 2015.

In his first full UK concert for more than three years, the 72 year-old performed a 40-song setlist that lasted nearly three hours and spanned the full-range of his incomparable music career.

There was no doubt that the 20,000 people in attendance at the O2 Arena for this evening’s concert were witnessing history.

It was Paul’s 50th solo show in the English capital – which has seen him perform at locations including Buckingham Palace, Royal Albert Hall and Wembley Stadium to name just a few. It was also 50 years since the ex-Beatle completed his classic track ‘Yesterday’, which has gone on to become the most recorded song of all-time.

But regardless of the milestones, simply having the opportunity to see a member of The Beatles perform live is a historic moment alone and something that people will be talking about for generations to come.

By far one of the most successful musicians of all-time, McCartney is one of very few living artists who are in the same bracket as icons such as Elvis Presley, so to see the man play music live was certain to be an unforgettable experience.

The atmosphere around the venue was electric and you could feel the excitement of every single ticket-holder – many of who had travelled thousands of miles to be here for this show.

McCartney hit the stage at 8:30pm to a rapturous reception. Opening with ‘Eight Days A Week’, the opening few tracks provided a glimpse of the full span of his illustrious career.

Other Beatles classics ‘Can’t Buy Me Love’ and ‘Paperback Writer’ got the joyous crowd moving. There was also the Wings hit ‘Let Me Roll It’ alongside solo tracks – including ‘Save Us’ from his NEW album and the 1980 track ‘Temporary Secretary’, performed live for the first ever time!

Stories about music legends such as Jimi Hendrix provided both entertainment and a glimpse into the nature of McCartney’s iconic life at the top of his profession. Meanwhile, there were some touching moments as he played tributes to his late wife Linda (Maybe I’m Amazed), fellow Beatles George Harrison (Something on ukulele) and song-writing partner John Lennon (Here Today).

More Beatles classics included the brilliant ‘Long and Winding Road’ and ‘Eleanor Rigby’, whilst later material such as ‘Nineteen Hundred and Eighty Five’ by Wings, ‘New’ – the title track of his 2013 album and even a UK debut of his newest track ‘Hope For The Future’ were all performed by McCartney and his band.

The whole show was captivating but it was in the final hour that McCartney really proved why he is on a level all of his own.

The title track of Wings’ most successful album ‘Band On The Run’ was followed by ‘Back In The USSR’ and the iconic ‘Let It Be’ – a performance that nobody in that audience will be forgetting n a hurry!

The stage then burst into a ball of flames and pyrotechnics as ‘Live and Let Die’ offered possibly the most impressive moment of the entire evening. McCartney followed this up with yet another iconic track, ‘Hey Jude’, which naturally had the crowd singing along right up until the rock legend took a bow and left the stage.

But of course he wasn’t done just yet! The first ever UK performance of The Beatles’ ‘Another Girl’ kicked off the encore, before a final surprise saw Nirvana and Foo Fighters’ Dave Grohl join him on stage for ‘I Saw Her Standing There’!

Few artists can pull off two encores, but if there’s one person that can it is McCartney…and he did just that! To the joy of the audience he returned clutching his acoustic guitar to perform ‘Yesterday’, 50 years on from writing this famous song.

Many thought that would be it, but incredibly – almost three hours after hitting the stage, McCartney burst out with the powerful rock track ‘Helter Skelter’. Finally, he concluded in the perfect fashion with the Abbey Road medley – ending fittingly with ‘The End’.

There are few adjectives to describe the greatness of the show as Paul McCartney proved that he deserves to be placed in the very highest bracket. It was an unforgettable experience and one I will no doubt be talking about for the rest of my life!