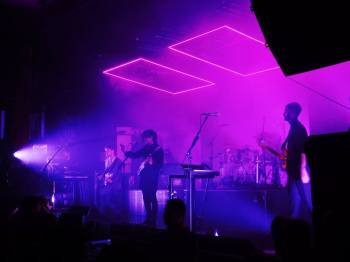 The 1975 performed to a sold out O2 Academy in Sheffield on the third night of their highly anticipated UK tour.

Having only recently struck fear into the hearts of their adoring fans with rumours of a split, this indie quartet proved that they are as strong as ever with an excellent performance on Wednesday night.

Supported by the energetically raw band ‘RAT BOY’, whose half-hour set included their tracks ‘Sign On’ and ‘Fake ID’, The 1975 thrilled a largely female audience with a mixture of old tracks, from their self-titled debut release, and new material – accompanied, of course, by their impressive trademark stage lighting and visuals.

Kicking off with ‘Love Me’, the first single from their upcoming second album, the band ran through an 18-song setlist in style, finishing on a high with ‘Girls’, before thrilling the crowd further with an encore of some of their biggest hits, ‘Medicine’, ‘Chocolate and finally ‘Sex’ – finally fulfilling the crowds chants of ‘We want sex!”.