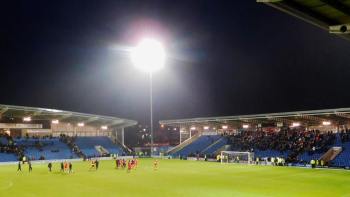 Sylvan Ebanks-Blake’s fifth league goal in as many games wasn’t enough to stop Chesterfield being defeated by Oldham Athletic at the Proact Stadium on Saturday.

The experienced forward capitalised on a loose ball in the box to give the Spireites a first half lead. But just as they looked to be heading for a fifth win in six, Dominic Poleon scored the Latics’ first goal in over five and a half hours to level the game.

Disaster struck for the hosts three minutes from time when Danny Philliskirk’s seemingly harmless strike from range squirmed under the body of Tommy Lee and somehow found the net via both the post and ‘keeper’s back.

Football is normally the most important part of many people’s Saturday. But today, there was a more sombre atmosphere at the Proact Stadium (and across the world) as events off the field were at the forefront of everybody’s mind.

This afternoon’s League 1 contest was preceded by an impeccably observed minute’s silence in memory of the 129 people who lost their lives in the tragic Paris attacks the previous night. As well as this, there was a further act of remembrance in the 21st minute as the entire stadium stood to applaud in memory of goalkeeper Marton Fulop, who sadly lost his battle with cancer during the week. The Hungarian made seven appearances for Chesterfield in 2005, wearing the number 21 shirt, before going on to play in the top flight and representing his country on 24 occasions.

On the pitch, the game was far from a classic. It took 17 minutes for either keeper to be called into action – Lee comfortably getting his hands to a weak Mark Yeates free kick.

After a rather mundane start, the Spireites began to grow into the contest and some good build-up play saw Dan Jones set up Ebanks-Blake perfectly, but the forward couldn’t get the ball out of his feet and eventually played the ball to Lee Novak who was adjudged offside.

Jones was again involved ten minutes later in the incident that saw the deadlock broken, as his low cross was deflected by goalkeeper Joel Coleman straight into the path of Ebanks-Blake, who made no mistake to find the net for the seventh time this season.

Chesterfield remained on top, Dan Gardner and the goalscorer both striking half-chances off-target, but ultimately lacked any real ideas in the final third and it remained 1-0 until the interval.

Despite Oldham’s poor start to the campaign, with just one win from their last 16 in all competitions, they were remarkably unbeaten away in the league. Their desperation not to lose this record was clear as they began the second half strongly, Poleon noticeably a threat as he caused numerous problems for the experienced defensive duo of Ian Evatt and Richard Wood.

However, the Latics struggled to translate the pressure into clear-cut chances and it took 65 minutes for the first save of the second half to arrive as Lee got down easily to hold Carl Winchester’s long range effort – a moment that was greeted by a number of amusing chants from the 445 away fans, including “Stand up if you’ve had a shot” and “Lets pretend we’ve scored a goal”.

The fans frustrations were understandable, their side surpassing five and a half hours without a goal, but in the 72nd minute Poleon finally found the net for Oldham to level the game. Lee got down well to palm away Giorgio Rasulo’s distanced effort, but the former Leeds man was first to the rebound and hammered the ball home from close range.

With little time remaining, the contest looked to be heading for a stalemate, despite Poleon stinging the goalkeeper’s gloves with a strike before a Jones cross clipped the crossbar at the opposite end.

However, with just three minutes to go, the visitors found an unlikely winner. Philliskirk’s long range effort bounced quickly on the wet surface and somehow squirmed under Lee, hitting the post before deflecting off the ‘keeper’s back and into the net.

It was a hugely unfortunate moment for the Chesterfield goalkeeper and one that sadly proved the difference, as Oldham clung on to pick up only their second victory in 17 games.

Latics manager David Dunn was clearly delighted with the victory, describing their opponents as a “good side” before telling the press “I’m pleased.” However, the former Blackburn and Birmingham midfielder did bemoan the nature of the majority of the away supporters’ chants this afternoon:

“The fans were noisy but a large amount of that was sarcastic, which is disappointing. It’s not 1992 anymore. We’re not in the Premier League, it’s a new beginning and in terms of budget I feel we’re punching above our weight. I don’t get why their is the expectation that we should be winning the league.”

“We haven’t played our normal game, but that’s partly down to the horrific conditions. And we’ve given them the game. I think they had about two shots.”

“The rain and water on the pitch spoilt the game. We could’ve ran out 1-0 winners but things just seem to be driving against us at home recently.”

Chesterfield now look ahead to trips to Port Vale and Doncaster Rovers in the coming weeks, hoping to continue their strong form away from home. 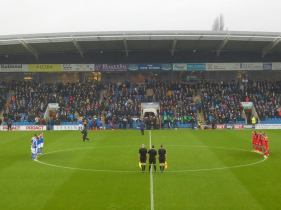 A minute’s silence for the Paris Attacks

Applause on the 21st minute for Marton Fulop

The goalkeeper sadly lost his battle with cancer this week