Harrison’s composed stoppage time finish salvaged a point for the Spireites after Kyle De Silva thought he had won the game for the visitors just moments earlier.

Chesterfield had led at the break courtesy of Harrison’s opener but a 75th minute header from Jimmy Spencer levelled a game which rightly ended level after a dramatic conclusion.

As was to be expected from the unbeaten side, it was the visitors who started on the front with a couple of half chances – although it was Chesterfield’s Mani Dieseruvwe who registered the first shot on target with a curling free kick into the goalkeeper’s arms.

But with 22 minutes on the clock, the best chance of the game so far fell to the home side. Jake Beesley’s pinpoint cross picked out Harrison at the near post, but the 28-year-old forward failed to take advantage and could only direct his header into the empty stand behind the goal.

However, Harrison made amends just seven minutes later by putting the Spireites ahead.

Youngster Nana Yiadom, formerly of Barnsley, did all the hard work in stealing possession in the area before unleashing a powerful strike at goal, which ‘keeper Scott Loach blocked. The former England under-21 stopper had no chance on the rebound though, as Harrison hammered home to open the scoring.

The goal had given the home side a new sense of confidence and they largely dominated the remainder of the first half as they looked to add to their lead.

Yiadom was handed a seemingly perfect opportunity to find a goal of his own when a ball cut through the defence and found the 19-year-old right in front of Loach, but he fluffed his lines and failed to get a proper connection at the vital moment.

The sides remained unchanged during the break and County started the second period on the front foot as they tried to avoid a first defeat of this Final Third Development League season.

A young Chesterfield backline held strong against a team who had averaged more than four goals a game and as the hour mark came and went, goalkeeper Aaron Chapman had barely had a shot to save.

Both teams made a change shortly after the hour, with De Silva replacing Genaro Snijders for the visitors while the impressive and hard-working trialist Yiadom left the field for youngster Davis Keillor-Dunn in the 70th minute.

Seconds later, Dieseruvwe looked certain to double the lead as he coasted through on goal, but somehow failed to even find the target with a disappointing finish.

And the Spireites were made to pay for missed opportunities as Spencer levelled the game with 15 minutes to go. Rhys Sharpe’s cross found the striker at the far post and he nodded home with a simple finish to make it 1-1.

Less than three minutes later, Dieseruvwe spurned another good opportunity when he charged towards goal before selfishly firing an effort high and wide despite having Jake Orrell with acres of space in support.

The intensity of the contest grew as it entered the final ten minutes with an outcome still unclear.

Chesterfield’s Tom Marshall almost won it in style late on, firing a tremendous curling effort from the edge of the area which forced Loach into a diving save in order to keep parity.

But in the final minute of play, Notts County thought they had stolen the victory.

A defensive line that had been solid for 89 minutes suddenly froze as substitute De Silva muscled his way through the area and poked past Chapman.

But the drama wasn’t over yet. Just as the game appeared to be finished, Harrison charged through on goal and showed brilliant composure to beat his man before slotting past Loach to salvage a draw for the Spireites. 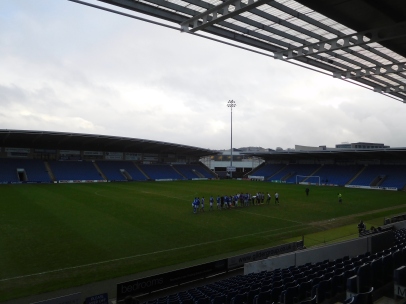 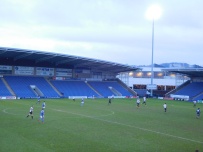