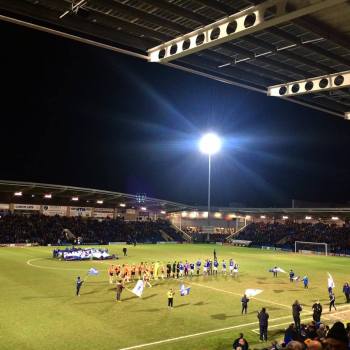 An action-packed first half saw the woodwork hit on no less than four occasions, three of which came from the visitors, but it remained goalless until the break.

Brad Potts opened the scoring in the 54th minute thanks to a big deflection that helped his hopeful effort lob the goalkeeper from range.

But the lead lasted only four minutes before O’Shea’s stunning effort found the top corner to earn his side a point.

For only the second time this season, Chesterfield had made it back to back league victories with an important 2-1 win at promotion-chasing Gillingham at the weekend. The run could hardly have been better timed, dragging the Spireites up to 18th and three points clear of those precarious relegation positions.

The six-pointers were coming thick and fast and the visit of 20th-placed Blackpool, trailing their hosts by just three points and themselves looking to avoid a third relegation in six seasons, was certain to be another massive game in the context of the Spireites’ season.

Blackpool made a start almost as bright as their famous tangerine shirts as they looked to end a winless run that stretched back to the end of January. It took only four minutes for Tommy Lee to be tested – Potts finding space in the box and unleashing an angled strike that the goalkeeper could only palm away.

Things began to settle down and it didn’t take long for the home side to get a solid grip on the game.

Just as he has been in more recent weeks, Gboly Ariyibi was a bright spark in the Chesterfield attack and the American U-23 international came close to finding the net twice in a matter of moments.

With a quarter of an hour on the clock, Ariyibi burst down the left wing and fired a dangerous cross low into the six-yard box that bounced off defender Tom Aldred before rolling agonisingly wide of the target – everyone in the Blackpool corner holding their breath for that moment.

Two minutes later, Ariyibi came even closer. Charging forward on the counter, Lee Novak picked out the winger who cut inside and curled an effort towards goal that beat goalkeeper Colin Doyle and crashed off the far post.

Potts made it 1-1 in the woodwork hits a few minutes later as his tremendous 25-yard strike caught out everyone by surprise when it smashed off the post.

It was a frantic half-hour that witnessed plenty of chances. A great piece of skill from Uche Ikpeazu (playing against Chesterfield for a fourth different club in 13 months!) saw him turn past two defenders in a single movement and poke an effort into the thankful grasp of Lee.

Blackpool were ending the half as they started it and must have been wondering how they weren’t ahead at the interval when Clark Robertson and Aldred both found the woodwork with headers in quick succession right at the end of the first period.

Danny Wilson’s half-time switch saw Connor Dimaio replaced by the more experienced O’Shea and the Spireites wasted no time causing second-half problems for Blackpool as Drew Talbot’s cross was almost converted by Sylvan Ebanks-Blake just eleven seconds into the half.

But after a spell of Chesterfield pressure, it was the opponents who broke the deadlock eight minutes after the restart. Potts continued to be a menace and hit a speculative effort from distance that took a big deflection to loop over the helpless goalkeeper and into the net.

The lead lasted only four minutes, however. O’Shea’s half-time introduction proved an inspired move by Wilson as the midfielder cut inside on the edge of the area and hammered an unstoppable ‘Novak-esque’ strike into the top left hand corner of Doyle’s net to restore parity almost immediately.

Potts came close in the 66th minute but could only drag an effort wide from Jack Redshaw’s setup.

But as the game wore on, the Tangerines became more and more content to settle for a point as they tried to slow down the game at every opportunity – much to the frustration of those supporting the Spireites.

The pressure continued to build but with the Blackpool backline camped out in the box, finding a breakthrough was becoming a tougher task by the minute. And not even the introduction of former million-pound striker Jordan Slew for his debut in the 86th minute or a second yellow card for Ferguson three minutes later could make a difference, as the visitors held on for a point.

But manager Danny Wilson remained positive after the game, saying: “We can’t complain really. They had chances just as we did, so I don’t think it was a one-sided game. It’d be a little bit biased to say we deserved the victory but then again we had the chances to do so. But if you don’t take them then you don’t win and I think we lacked a bit of cutting edge tonight.”

Speaking of O’Shea’s strike, the boss said: “It was a terrific goal. When he’s been brought on to play that number ten role he has to make things happen and he certainly did that. I don’t think three ‘keepers would have stopped that one!”

Chesterfield, who remain in 18th position and three points off the bottom three, now look ahead to another long trip at the weekend as they travel to Roots Hall to face Southend United. 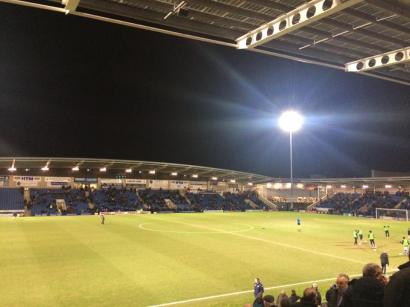 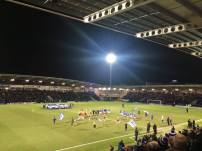 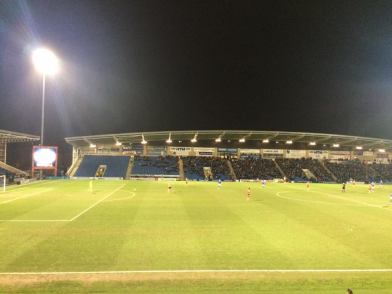 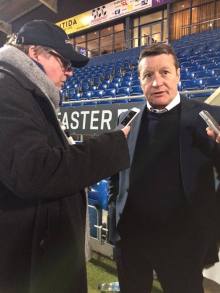