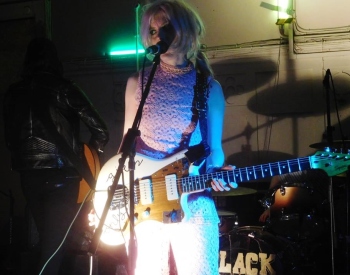 Black Honey headlined a superb Friday night of live music that the sold-out crowd at Sheffield’s Picture House Social won’t be forgetting in a hurry.

Playing on the fourth night of their highly anticipated UK Tour, this indie quartet with a sixties style thrilled the crowd on their first return to the city since last year’s Tramlines Festival.

Support was provided by local special guests ‘Blessa’ who, fresh from a performance at Sheffield’s inaugural Outlines Festival, kicked things off nicely with their sound led by the soft vocals of leather jacket-wearing Olivia Neller.

Main tour support Johnny Lloyd then hit the stage and left a big impression on the crowd with a rocking half-hour set that included the wonderful track ‘Happy Humans’ and ‘Pilgrims’.

The underground venue was now abuzz with anticipation as the main event grew nearer, and there was a huge cheer when the quartet stepped on to the stage at 10:15.

Instantly recognisable frontwoman Izzy Baxter filled the room with the sombre, booming opening lyrics of ‘Spinning Wheel’ before the whole band suddenly burst into action and sent the room crazy with this opening track of the set.

And for the next 45 minutes, the room never stopped moving as the crowd grew increasingly raucous and ecstatic with each passing song.

Tracks including ‘Madonna’, ‘Teenager’ and the steel city crowd were even treated to the brand new song ‘All My Pride’.

The ever-haunting ‘Mothership’ saw Baxter once again fill the room with her powerfully intense vocals and the occasional scream as the adoring crowd watched on.

As 11pm approached the set was brought towards it’s conclusion with ‘Corrine’, which had everyone in the sold out venue singing along, before finally ending their 45-minute performance on a high with ‘You Said It All’.

It was a typically brilliant performance from a band that seem to thrive in the underground environment. There is no doubt that Black Honey are a band who are going places fast.

The stage is set 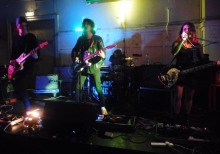 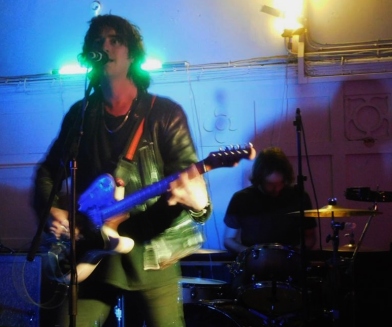 with Black Honey before their set