A goal in either half from Wilkinson, making his home debut after joining on deadline day, put the Spireites in a commanding position.

The Cobblers briefly threatened a comeback when Paul Anderson pulled a goal back shortly after the hour mark, but Kristian Dennis flicked Dion Donohue’s strike home twenty minutes from time to seal a 3-1 victory for the home side.

Chesterfield returned to the Proact Stadium for league action, after nearly a month’s absence, in desperate need of victory.

Having topped the League 1 table after a trio of games, the Spireites had struggled more recently and were without a win in four before this afternoon’s contest – their only point this month coming in a goalless draw at Boundary Park last weekend.

But earning a third home league victory of the season was going to be far from easy against a Northampton Town side, managed by ex-Spireite Rob Page, riding high on the momentum of being the reigning League 2 champions and unbeaten in 31 games.

Their task wasn’t made any easier by the absence of top scorer Ched Evans through injury; Dennis and on-loan Wilkinson, making his home debut, instead leading the attack for Danny Wilson’s side.

And the 21-year-old loanee made it a debut to remember as he opened the scoring in the seventh minute, latching on to Jon Nolan’s through ball before drilling a low strike in off the far post to put the Spireites in front early on.

The Republic of Ireland U-21 international looked close to doubling his tally seventeen minutes later, but Gboly Ariyibi’s deflected cross was lofted off the line by Zander Diamond before the forward could get to the ball to convert a seemingly certain goal.

While not an action-packed half, the Spireites looked firmly in the ascendancy and good value for their one-goal lead.

However, it nearly disappeared in the 41st minute when Matt Taylor unleashed a driven strike from outside the area that forced goalkeeper Ryan Fulton into an excellent fingertip save.

Chesterfield fans then had their hearts in their mouths in stoppage time at the end of the half when a scramble ensued in the six-yard box, but the Spireites were rescued from danger by the assistant’s offside flag.

However, four minutes after the restart the home supporters were celebrating once again as Wilkinson’s dream home debut continued with a deflected strike that flew past goalkeeper Adam Smith to double his and the Spireites’ tally.

With the home side continuing to look relatively comfortable with their two-goal advantage, Northampton manager decided to bring on striker Marc Richards, a man who scored 20 times in 72 appearances for Chesterfield, in hope of turning the contest around.

And just seconds later, the Cobblers pulled one back. Anderson beat Donohue to the ball before striking an effort that crept inside the far post to give the 736 travelling supporters behind the goal newfound belief of a turnaround.

An expected spell of pressure followed from the visitors. However, just as the tension was mounting around the Proact, Dennis gave every Spireite supporter a huge sigh of relief when he flicked home Donohue’s low strike to restore a two-goal advantage.

Northampton continued to battle until the very end, but the Spireites were deserved winners and rose to 10th in the table after ending the Cobblers’ incredible unbeaten run.

Rob Page’s side will need to put the defeat, their first away from home since October 2015, to the back of their minds quickly as they host Jose Mourinho’s Manchester United on Wednesday evening in the League Cup.

Meanwhile, Chesterfield’s next action comes at the weekend with a trip to Bury’s Gigg Lane, where they will be hoping to make it back to back victories.

The Spireite pub opposite the Proact Stadium 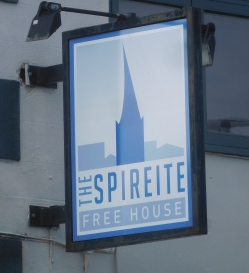 Unbeaten Northampton are the visitors 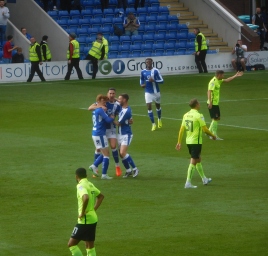 Conor Wilkinson opens the scoring in the seventh minute

Kristian Dennis starts for the Spireites

A third for Chesterfield