Mark Shelton’s second half goal gave Ilkeston victory over Barwell as I made my first ever visit to the New Manor Ground.

Located in Derbyshire, Ilkeston FC was the latest destination on my football ground travels as we headed to the New Manor Ground for their match with Barwell in the Northern Premier League Premier Division, which sits at step seven in the pyramid – three below the football league.

Known as the Robins, the club were founded in 2010 as the successor club to the liquidated Ilkeston Town, whose were formed in 1945 but have roots as far back as the 1880’s.

The 3,029 capacity New Manor Ground has been the home of Ilkeston’s football clubs since 1991 and is an excellent standard for the level, being most recognisable for it’s unusual clock tower and raised accompanying stand which provides the best view of the action for spectators.

Having finished 14th in the 24-team division last season, the current campaign had been delayed for the Robins due to league suspension and as a result they didn’t play their first match until the 27th August, which ended in a 2-0 home defeat to Ashton United.

Having played as many as six fewer games than other teams in the division, Ilkeston were naturally placed near the bottom of the division but headed into this evening’s meeting with mid-table Barwell on the back of a last-gasp 2-1 win at Corby Town at the weekend.

And in a contest witnessed by 242 supporters, the Derbyshire outfit made it back-to-back victories in a closely-fought contest at the New Manor Ground.

In truth it was far from a classic, with noteworthy chances for either side at a premium, and the two sides were ultimately separated in freak fashion as Shelton spotted the Barwell ‘keeper in no man’s land and lobbed him from range with a stylish effort.

The visitors battled on in search of an equaliser, but never truly looked like finding the net and ultimately it was the hosts that picked up the three points. 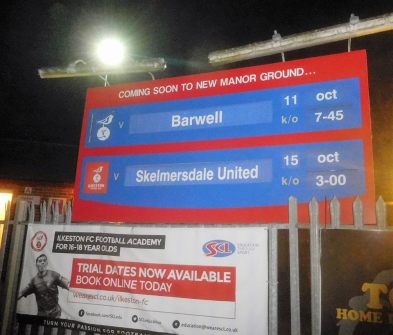 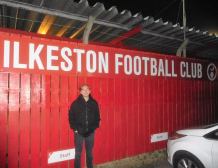 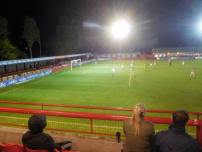