England Under-17’s got their European Championship Elite Round campaign off to the perfect start with a comfortable 3-1 victory over Turkey at Chesterfield’s Proact Stadium.

Arsenal youngster Reiss Nelson put the Three Lions ahead two minutes before half time and two minutes after the restart, the hosts advantage was doubled courtesy of 16-year-old Jonathan Leko.

Nelson doubled his tally from the penalty spot six minutes later to put England out of sight and despite Furkan Korkut scoring a late consolation for the visitors, it was a good start for two-time Under-17 European champions as they look to qualify for the finals in Azerbaijan.

END_OF_DOCUMENT_TOKEN_TO_BE_REPLACED 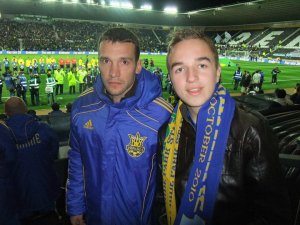 On Monday 11th October 2010 I went to Pride Park, the home of Derby County, to watch an International Friendly match between Brazil, the 2014 World Cup hosts, and Ukraine, the Euro 2012 co-hosts.