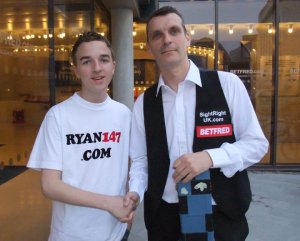 The reigning 6 reds world champion Mark Davis is the latest snooker star to be interviewed on ryan147.com

Mark Davis turned professional at the start of the 1991/92 season. At 37 years of age he seems to have been playing some of the best snooker of his career over the past couple of seasons.

Last season Davis won the first ever 6 reds World Championship, beating Mark Williams 6-3 in the final, in probably the victory of his career. Other tournament wins have been the 2007 German Open and the 2003 B&H Championship, but Mark is yet to have won a ranking event.

Currently 2010 is one of the best years for Mark as he is currently ranked 18th in the World which is his highest ever ranking and in China in March he recorded his highest ever tournament break a 143.

Away from the Snooker table he also got married this year.

Read his Q&A below…