On Saturday 7th August I went  to watch Chesterfield play Barnet in the first ever league match at the new B2Net Stadium.

After years of anticipation,and following the building of the stadium from a pile of mud through to the wonderful football ground it now is, it was finally time to see our first game at the b2net stadium.

Chesterfield had played two friendly matches at the ground, against Derby County and Barnsley, but we were away on holiday when they were played so this was the first game for us and the first proper game for the club.

As we pulled up to the ground the Barnet players coach pulled up, so I got pictures with a few of the players including Steve Kabba. Then we headed in to the club shop hoping I could get a kit for the season but sadly they were sold out so I will have to wait until the next home match against Hereford.

There was an odd feeling when we first arrived, not knowing a routine like we did at Saltergate, so we just wandered around for a bit, chatting to a few people and taking in the match day atmosphere. It didn’t feel like our home stadium, but then it never was going to at first and I am sure we will grow to love the stadium in time.

We met up with Tim Rigby who runs the site tims92, as we did before the last match at Saltergate, and chatted for a while before heading in to the stadium.

My first impression was how great the ground was. I had been in once before when the stadium was empty, but seeing it full with fans and the players warming up on the pitch, it was a world away from Saltergate.

Our view is brilliant. Being directly on the centre line we have a great view of both nets and we are near the back of the stand so we can see everything. It wasn’t like Saltergate where you were basically watching the match from pitch level,(where we sat on the Compton)  it was so much better.

1866 blue and white balloons were released before kick off, representing the year the club was formed, to commemorate the game at the new stadium.

The game got off to a scrappy start. Barnet had the first good shot making Tommy Lee pull out a spectacular save to stop the ball going in the top corner.

On the 24th minute Drew Talbot found Dwayne Mattis at the near post and he put it in the net to score the first ever league goal at the new ground and put his name in the history books.

Jack Lester, who was making his 100th league start for Chesterfield, made it 2-0 on the hour mark.  With his back to goal he turned and beat a defender before placing the ball in the net. The b2net stadium was already starting to feel like home for the Spireites.

Glen Poole made it a nervy ending for Chesterfield though when he fired the ball in to the top corner from around 20 yards out.

Craig Davies was sent off on the 82nd minute when he slid in on Steve Kabba. It looked harsh from where I was sat and on the videos Ive seen since it still looks incredibly harsh, but the referee immediately sent Davies off leaving Chesterfield with 10 men for the last few minutes.

The Spireites managed to hold on to all 3 points and win the first league game at the b2net stadium.

Outside after the game I met Derek Niven, who scored the last goal at Saltergate, and Dwayne Mattis, who scored the first at the B2Net, as well as Barnet manager Martin Stimpson.

I had a good first day at the B2Net, and I am sure I will enjoy many more visits there for many years to come. 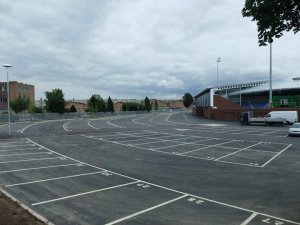 The building of the box for the Sky TV presenters is under construction for next Tuesday's Middlesborough live match.

The special edition programme lies in front of the venue 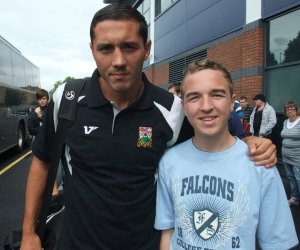 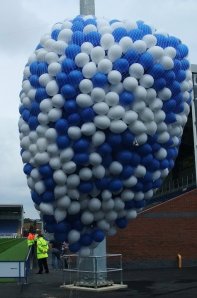 1866 balloons to be let off before the match 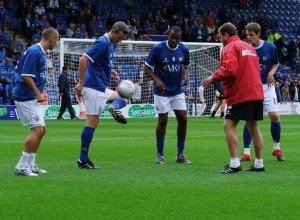 The players warm up 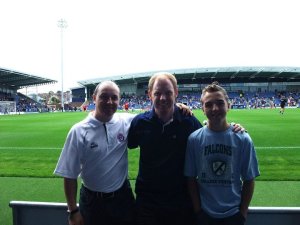 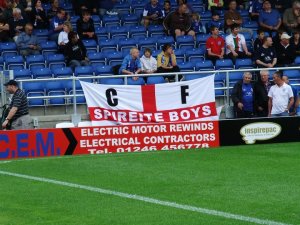 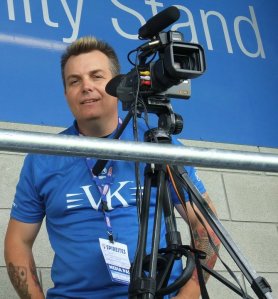 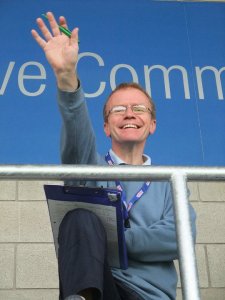 Steve Yorke, who does the commentary 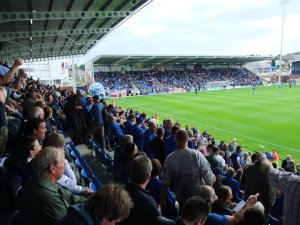 The stadium fills up with supporters

The 1866 balloons are released as the teams come out

The balloons fly off in to the sky

The captains, officials and mascots have their photo taken 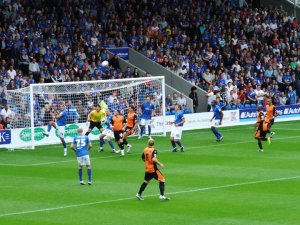 An early corner for Barnet

Steve Kabba is down after a tackle from Craig Davies

The stretcher is brought on

Dwayne Mattis, the scorer of the first league goal at the b2net stadium 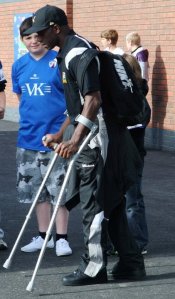 Steve Kabba comes out on crutches

Derek Niven who scored the last goal at Saltergate 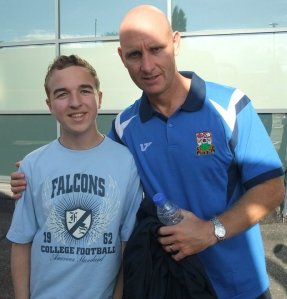