On the 9th April 2011 I was the Crucible Theatre to witness the second Snooker Legends event to be held at the venue. This years Snooker Legends featured many greats of the game including Cliff Thorburn, Jimmy White, John Parrott and Dennis Taylor with a special guest appearence from Kirk Stevens.

We arrived at the Crucible about an hour before the event began and went up to the foyer to have a look at the merchandise and see if we could spot any of the legends. Kirk Stevens was the player I most wanted to meet as I had never met the Canadian legend before.

Then, to my surprise, we were kindly invited into the VIP room where all the legends go before to have a chat and meet all the special guests. This was a wonderful opportunity for me as I got the chance to meet and have pictures with all the legends, Kirk Stevens, Cliff Thorburn, Dennis Taylor, Jimmy White as well as special guests Tony Knowles, Doug Mountjoy and Darts legends John Lowe and Bob Anderson. Everyone was really friendly to me and even Cliff Thorburn recognises me nowadays. I was delighted to have this chance to meet all the legends before the event and with just minutes to go we went and took our seats in the arena.

The event began with a tribute to Alex ‘Hurricane’ Higgins, who took part in the event at the Crucible last year and sadly passed away in August of the same year. John Virgo came out and told us a couple of stories about Alex, before a tribute video was played on the TV screens with a specially written song playing.

John Virgo then announced that there would be no trickshots due to time, but to warm up the crowd he would do a few impressions of how some of the legends would play the black. First up was JV’s impression Terry Griffiths, and of course JV took an incredibly long time walking around the table, lining up various possibilities and looking at all the angles before finally just rolling the black in. Next was Dennis Taylor, and JV put on his massive comedy glasses, stepped up and (nearly) potted the black. Finally, it was an impression of the 1972 and 82 world champion Alex Higgins. JV got down on the black, twitched, tapped the table with his cue and then blasted the black into the pocket. All the impressions were very good and it was a great way to warm up the audience.

The opening match of the evening was Kirk Stevens vs. Jimmy White. This was a repeat of the match at the 1984 Masters where Kirk made the first 147 break at the tournament. The format for the match was two frames, and if it ends level then there is a black ball shootout to decide who would face John Parrott in the semi final. I have to admit I was quite surprised at how well Kirk could still play, as he made a good half century out of nowhere and took the first frame on the blue to lead 1-0. Jimmy levelled the game with a quality century break in the second frame, to take the match to a black ball decider. Jimmy broke off and left Kirk a chance at the black, but he missed it and left Jimmy with a simple pot to book his place in the semi final.

The first semi final, and second game of the evening was between 1980 World Champion Cliff Thorburn, and 1985 World Champion Dennis Taylor. Dennis was another player who surprised me by how good he still was. Cliff hardly had a look in for the whole match as the 1985 World Champion (just incase you had forgotten!) took the two frames with ease to book his place in the Snooker Legends final.

The second semi final was between Jimmy White and John Parrott, a repeat of the 1991 World final. Parrott had just arrived after racing to Sheffield from Aintree, where he had been reporting on the Grand National for the BBC. JP let us all know that he hadn’t backed the winning horse, before taking the first frame. Jimmy came back though with his second century of the evening to force another black ball decider. It was once again Jimmy who won the black ball and so he would face Dennis Taylor in the final later in the evening.

After the interval, the second half began with a short auction, which included some framed signed photos of all the legends and of various players through the years.

There was then the doubles game, with the two losers of the first half’s matches, Kirk Stevens and Cliff Thorburn, along with Egghead CJ de Mooi and a member of the audience who won the raffle. The man from the audience called Adrian played quite well and with some help from Cliff Thorburn, it was his side that won the frame with some ease. CJ didn’t play brilliantly, but he did manage to pot a ball at the Crucible which is something I’m sure anyone would be proud of.

With the doubles match finishing quite quickly, Jimmy White offered to auction off a frame against his to a member of the audience, and it was special guest PC David Rathband who won it for £560. It was a heart warming sight to see him playing against Jimmy at the Crucible, with help from John Virgo. David was having a laugh with all the legends and the crowd. I am sure it will be a day he will never forget, and he even took and incredible blue to the top pocket!

Finally, it was the one frame Legends final shootout between Jimmy ‘Whirlwind’ White and Dennis Taylor. Dennis played well and even took the lead early on, but Jimmy came back and made a good break to seal the victory and finally lift his first trophy at the Crucible Theatre. Jimmy lifted the trophy and posed for photos with it before giving it away to David Rathband, which I thought was a very kind gesture.

Overall I had a wonderful evening, the Snooker Legends is always a great night and I would recommend it to anyone who can get to an event in the future. I will be back at the Crucible in exactly on week for the 2011 World Championship and I will be doing my Crucible diary on this site, I can’t wait!

I'm back at the Crucible!

On the steps overlooking the foyer 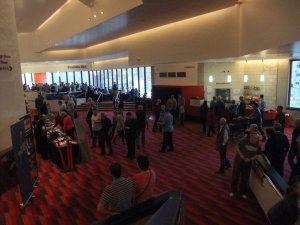 Egghead CJ de Mooi, who took part in the doubles 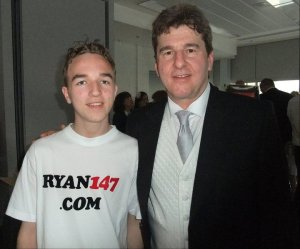 with two of Canada's greatest ever players, Cliff Thorburn and Kirk Stevens 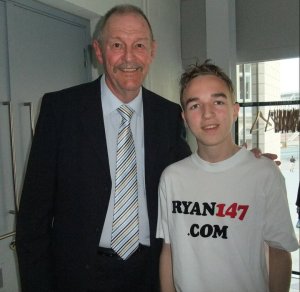 Dennis signs my programme while chatting to another legend Cliff Thorburn 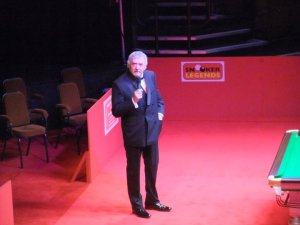 John Virgo tells us a story about the Hurricane

No trickshots tonight, but some impressions instead!

JV shows us how Terry Griffiths would pot the black

Dennis Taylor chalks the wrong end of the cue! 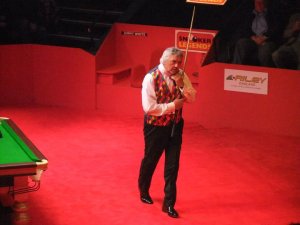 JV pulls of his bowtie just like the Hurricane! 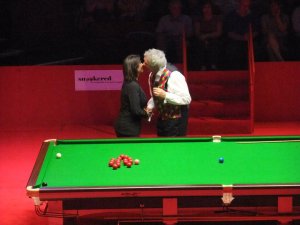 The two players shake hands before their match

Virgo has a chat with Jimmy after losing the first frame

Kirk waves to the audience after losing on the black 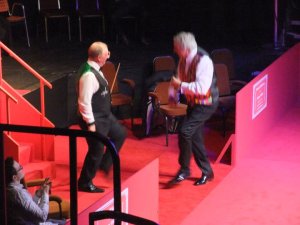 Taylor and Virgo do a little Irish dancing! 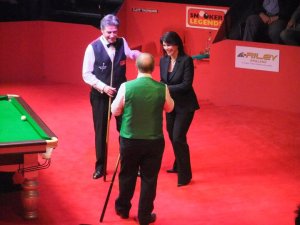 Michaela Tabb decides who will break off 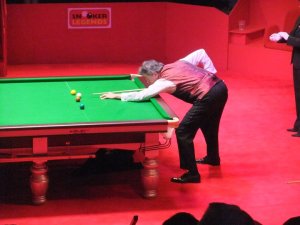 Its Cliff who gets the match underway 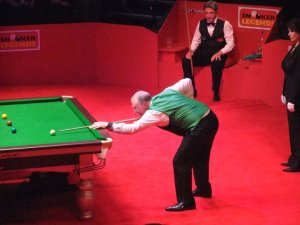 Cliff Thorburn at the table 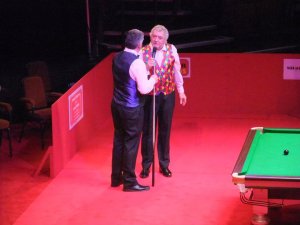 John Parrott has just arrived, and JV asks him if he backed the winning horse 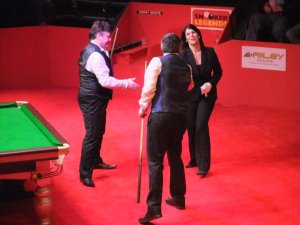 Jimmy White wins on the black for the second time tonight

with John Lowe during the interval 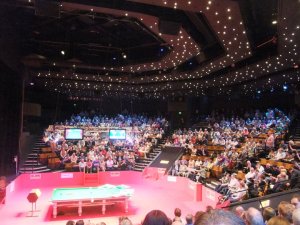 The Crucible is lit up 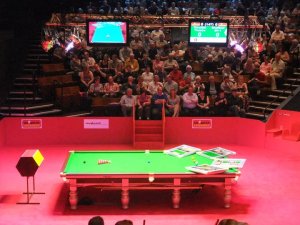 Its time for the auction and the raffle

John Virgo shows off one of the items on sale 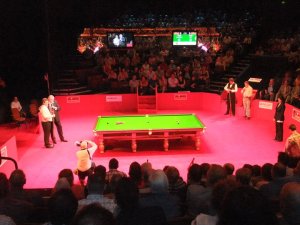 The players all shake hands before the match 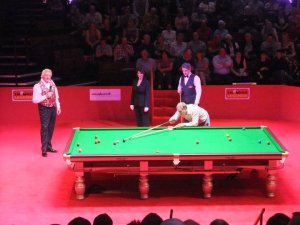 The raffle winner on his way to an impressive 12 break!

David Rathband makes his way down the steps 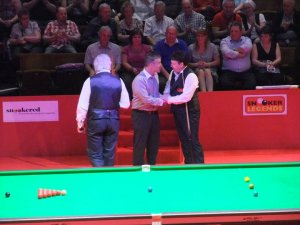 he is greeted by Jimmy White and John Virgo

Virgo helps line up the shot

David takes the shot on 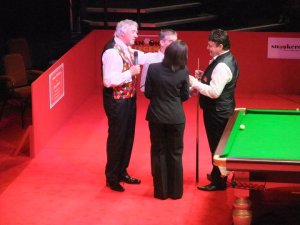 JV, Michaela and Jimmy all congratulate David on his performance

JV congratulates Jimmy on his victory, and Jimmy tells the crowd that he will be back at the World Championship next year

and then kindly gives it to David Rathband

David proudly shows us his trophy and cue

I hold up the trophy for a photo