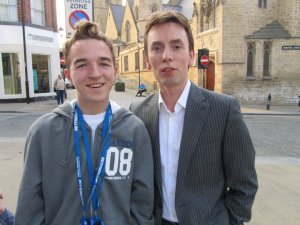 On Thursday 21st April 2011 I was once again at the Crucible as the second round began with Martin Gould v Judd Trump.

We arrived at the Crucible about an hour before the evening session began, and before heading into the arena I spotted former World Champion Ken Doherty stood in Tudor Square, so I went over and had a picture with him. While having the picture, Ken joked that I was “throwing pictures of him away now” but I have had a few pictures with him over the years!

We then headed into the Crucible Theatre to watch the second round match between Martin Gould and Judd Trump, both qualifiers who beat seeded players to reach this stage. Trump of course shocked the defending champion Neil Robertson, beating him 10-8 while Gould beat Marco Fu by the same scoreline.

We were sat by The Statman (who does have a name, Chris) and Kellie on the second row which meant I not only had a good view but that I would also be seen on TV.

I had anticipated that this would be a close and very quick match, but Trump came out and won the first 3 frames of the session to lead 3-0, but Gould then won the 4th to go in at the mid session interval 3-1 behind. Gould played much better after the interval, winning the next two frames to level at 3-3, but then lost the 7th and a close 8th frame to end the session 5-3 behind, though I think this was a fair result as Judd Trump played some brilliant snooker throughout the session.
It was now time to head home at an unusually early time of 10:30, which is much earlier than the previous two evening sessions had finished. I would be back the next day for the second session of this match in the afternoon.

The BBC filming from inside the Crucible 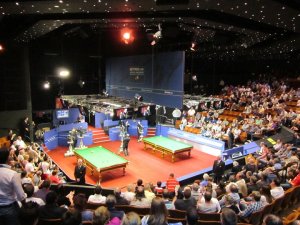 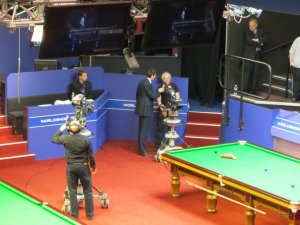 Rob Walkers chats to a cameraman who has made his own album! 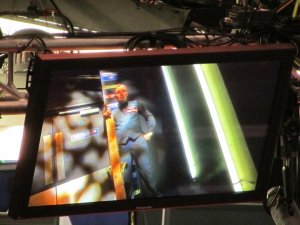 “Time to play the game…” 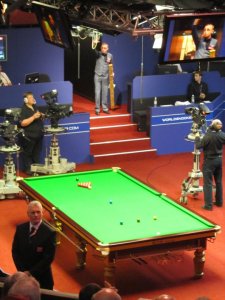 Gould takes his cue out of his case 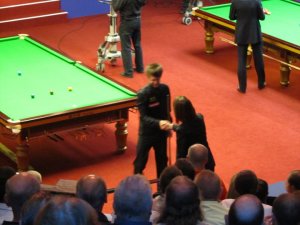 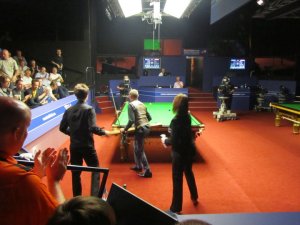 Judd Trump ends the session 5-3 ahead

Martin Gould packs away his cue 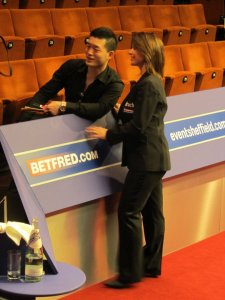 Michaela Tabb has pictures with fans after the session 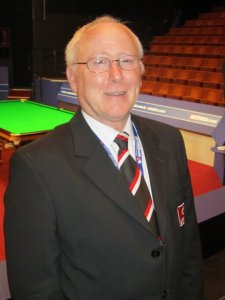 Brian Wright and The Statman

Cameron, me and Brian (Dundee United, Chesterfield and Coventry fans!)