On Saturday 30th April 2011, I was at the Crucible Theatre for the semi finals of the World Championship watching two former world champions John Higgins and Mark Williams battle it out for a place in the final.

It was another 10am session for me, which if isn’t my favourite time but its still great to be at the Crucible for the Snooker. Especially in a semi final consisting of two of the Worlds best players.I had no doubt I would be seeing some great play today.

Mark Williams came into this session, the third of the match, 9-7 ahead. The two players shared the four frames in a nervy mini-session that left the score 11-9 in Williams favour. From here the Welshman seemed to just fall apart, and he missed lots of easy shots and lost all four frames after the interval to trail 13-11 going into the last session.

With the morning session over we decided to stick around for a while and chat to various people we knew.It was a very nice sunny day and there was a great atmosphere around the Crucible Theatre. As we walked through the Winter Gardens we noticed Michaela Tabb posing for some photos, she saw us and was more than happy to pose for quite a few photographs for us and also have a few pictures with me.

I also had a photo with MC Rob Walker inside the Crucible, Rob always says hello when he sees me.I also met Malta’s Tony Drago. We then bumped into the legendary Clive Everton, who knows my Dad’s Uncle Mike Watterson well and we chatted to him for a while about Snooker, Journalism and various other things.

Later on I watched Ken Doherty doing some filming in Tudor Square for the Shots of the Tournament montage, which was quite amusing and a good insight into how they film these sections for TV.

Finally, I saw 1977 UK Champion Patsy Fagan making his way into the Crucible, and so we spoke with him for a while about his 1977 UK victory and how rare the programme is from that final. I then had a photo before heading home.

The name that brought Snooker to Sheffield 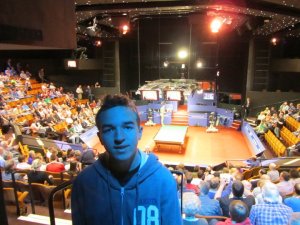 Inside the Crucible Theatre

Rob Walker chats to CJ de Mooi before the introductions

My view of todays session 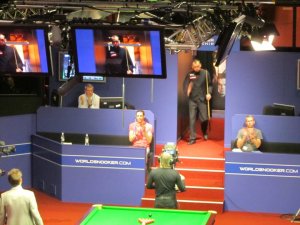 View of the foyer from the bar

Michaela Tabb poses for the camera

In black and white 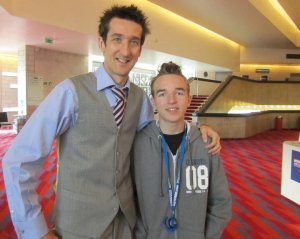 with Rob 'The Talker' Walker

View of Tudor Square from inside the Crucible

BBC film Ken Doherty in front of the Crucible 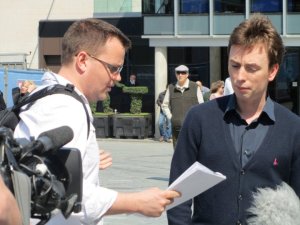 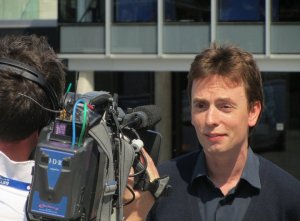 Up close to the Camera 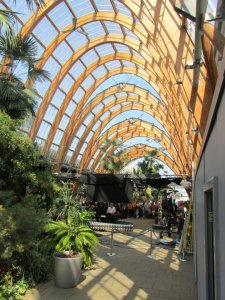 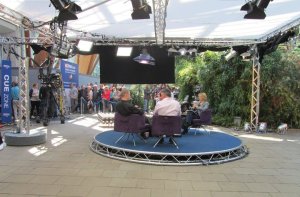 Stephen Hendry in the Studio

Street Snooker and the Crucible 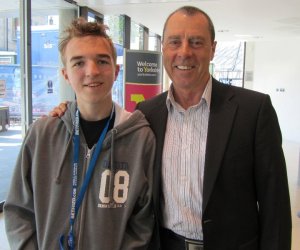