On Tuesday 16th August 2011 I was at the B2Net Stadium to watch Chesterfield host Preston North End, who were relegated from the Championship last season.

I had been looking forward to this game since the fixtures came out as Preston are one of the bigger teams in League 1 this season. It isn’t long since they were in the Championship play offs so to have them playing at the B2Net Stadium was exciting. However, neither side had got off to a good start this season with both teams picking up just a single point from the first two games, so I felt there was a chance for the Spireites to get something from the match.

As the game got underway it quickly became clear that it was going to be an uphill struggle for Chesterfield, with Preston having the likes of Hume, Mellor and Carlisle in their team. After 17 minutes Clarke Carlisle headed the ball home straight from a corner to put the away side 1-0 ahead.

From here Chesterfield played much better and had plenty of possession of the ball, but just lacked the finish that was needed. Our lack of strikers really showed against better opposition as Jack Lester simply couldn’t do it all alone.

At the start of the second half Chesterfield had probably their best spell, again having a lot of the ball but still failing to really do anything with it. The spell was stopped dead on the 70th minute when Barry Nicholson’s header bounced over Tommy Lee to make it 2-0 to the visitors and almost certainly confirm the victory.

Sheridan took off Morgan, Lester and Niven to be replaced by Bowery, Boden and Lowry after the second goal, but by now the game was back in Preston’s control, and they could have easily scored more than 2 goals.

The game ended 2-0 to the away side, equalling the Spireites’ biggest home defeat along with the 2-0 defeat to Morecambe last season. However the defeat wasn’t a huge surprise, as they were a Championship side last season and they still have many class players, while we were a League 2 side last season and we have lost some of our most influential players during the summer.

After the match I got photos with Preston players Iain Hume, Neil Mellor, Clarke Carlisle, Jamie Proctor and Andreas Arestidou as well as their first team coach David Unsworth. I also got a photo with manager Phil Brown, who led Hull City to the top flight for the first time in their history back in 2008 and is now in charge of Preston North End. 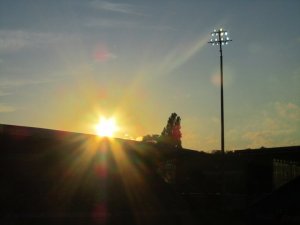 The Sun looks over the stadium

The players line up before kick off

The Kop with the Chesterfield flag

The scoreboard before kick off 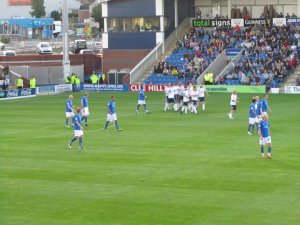 Goalscorer for Preston is Clarke Carlisle

The Sun sets over the B2Net Stadium 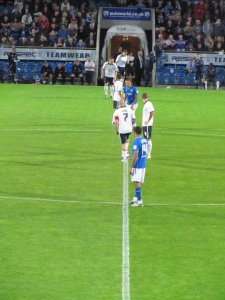 The second half begins

The away fans celebrate their sides second goal 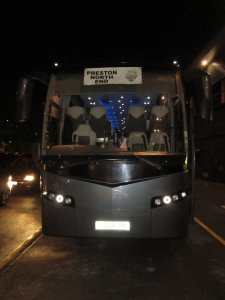 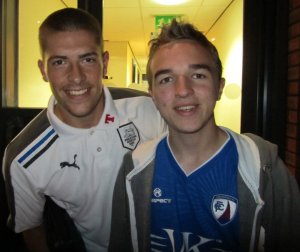 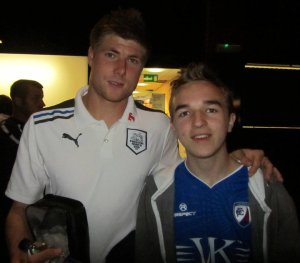