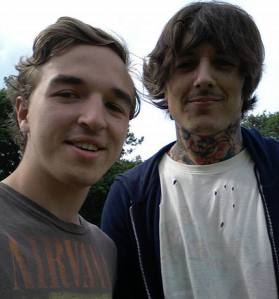 On Saturday 12th July, I met Oli Sykes the lead vocalist of the band Bring Me The Horizon. By pure chance, I happened to be in the same park as the 27 year old who front’s one of Sheffield’s biggest bands. He was very friendly and happy to pose for the photo above. His band BMTH formed in 2004 and have released 5 albums, the most recent of which is titled ‘Sempiternal’. The group recently returned from a North American Tour alongside ‘Of Mice and Men’ and are preparing to play Wembley Arena for the first time in December.