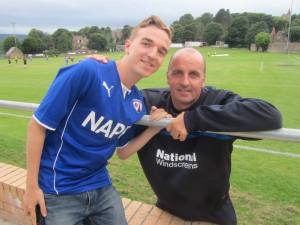 On Monday 14th July 2014, I went to Sandygate to watch Hallam play Chesterfield in a Pre Season friendly.

Less than 2014 hours after the conclusion of the 2014 World Cup, which saw Germany lifting their 4th title, I began my 2014/15 season with a trip to watch Hallam play Chesterfield. It was the third consecutive season that I’ve started at Sandygate and my sixth visit in total, so we know the routine pretty well by now! Sandygate is the world’s oldest football ground, having hosted football since 1860. It is home of Hallam FC, the second oldest football club behind neighbours Sheffield FC, who play in the North East Counties League. The quality of the ground is good considering the level of football regularly played there, with a nice stand that seats up 210 alongside a very comfortable clubhouse, although the ridiculous slope of the pitch is a reminder of the low league position of its hosts.

It wasn’t quite the gorgeous summer’s evening we’d been hoping for upon arrival at the ground but I was still pleased to be at my first live football match for over 2 months. The youth of the Chesterfield side put out to face Hallam was instantly confirmed when I, wearing my Chesterfield shirt, was almost let in for free by the lady on the turnstile who thought I was playing for the Spireites! After sorting out the confusion, purchasing a programme and of course taking a few photographs, me and my Dad took up seats in the centre of the stand ready for the action to begin.

My 2014/15 season got off to something of a slow start. The first half was very scrappy with the boys of the Chesterfield XI unable to break down the much older and more experience Hallam side. The home side did have the ball in the net with seven minutes to go until the interval, but it was ruled out by the assistant for offside and the two sides headed to the dressing rooms without a goal between them.

Just three minutes into the second period and the game had its first goal. 17 year old George Milner turned inside the box and fired home to put the visitors ahead. Many would have expected the youngsters to push on from here and claim a comfortable victory as the part-timers tired, but it wasn’t the case and 19 minutes later the scores were level when Simon Mirfin sent the goalkeeper the wrong way from the penalty spot.

Both teams went in search of a late winning goal. Chesterfield’s number 9, who had been the most impressive player for the visitors but due to a lack of team sheet’s his name remains a mystery, went on a wonderful mazy run that left numerous defenders for dead before his effort was blocked by the keeper. The rebound fell to another Chesterfield youngster who had an empty goal at his mercy but he somehow placed the ball wide of the target.

Hallam almost stole it late on but could only find the side netting with their strike and the game ended level at 1-1. Sandygate is always a nice place to watch some early season football and Spireites manager Paul Cook obviously thought so too as he was in attendance at the game and of course happy to oblige for a photo! 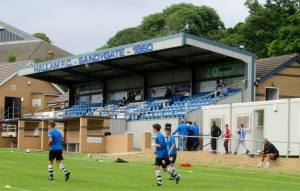 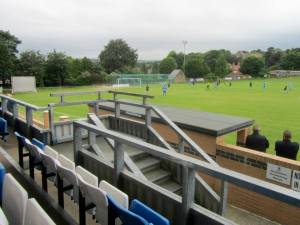 View from the stand 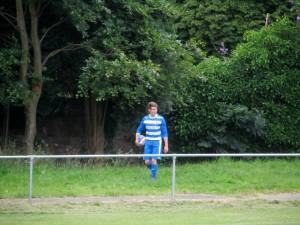 A Hallam player retrieves the ball from the trees! 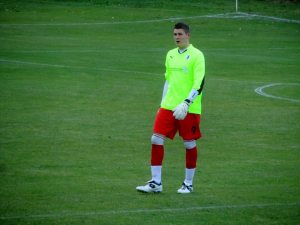 Not the nicest goalkeeping attire I’ve ever seen! 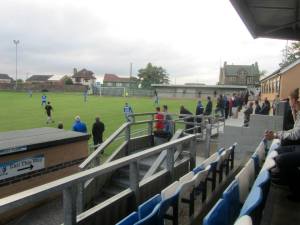 View from the dugout 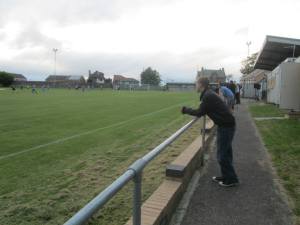 I watch the second half 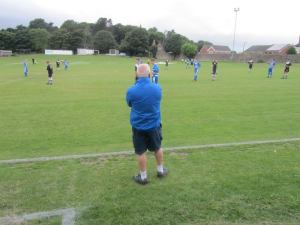 The Hallam boss looks on from the touchline

Hallam search for an equaliser 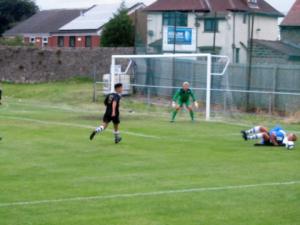 The hosts are awarded a penalty

…and levels the scoreline

Paul Cook looks on as Hallam take a corner