The Proact Stadium played host to one of the poorest matches it has ever seen on Saturday 1st November, as Chesterfield and Yeovil Town played out a goalless draw.

The visit of Yeovil Town appeared to be the perfect opportunity for Chesterfield to end a poor run of form that has left them without a win in five. The Glovers’ last league victory was on 20th September and with just one point from their last six games, they were placed firmly in the bottom four of the League 1 table.

Yeovil are the visitors

There were a number of tactical changes for both sides ahead of the game.

Charlie Raglan made his home debut for the Spireites due to the suspension of captain Ian Evatt. Meanwhile, Daniel Johnson – the October player of the month for Chesterfield, found himself among the substitutes once again. Jimmy Ryan also fell to the bench with his role in the centre of midfield filled by loanee Oscar Gobern.

It was the first day of November and while many shops were already stacking their shelves full of Christmas gifts, the sunny weather in North Derbyshire this afternoon made it feel more like a mid-summer match.

A beautiful day in Chesterfield

However, the weather turned out to be the only real bright point of a dismal opening 45 minutes. There was a barely a chance of note between these two struggling outfits and it was clear that this was a hard-fought contest between two sides with very little confidence.

The second period improved in quality slightly, although it was still far from what the supporters had come to expect.

A goalless first half

Goalkeeper Tommy Lee was forced into a double save early in the second period from an Arthurworrey header and quickly after, a low effort from Joel Grant.

At the other end, Chesterfield’s top scorer Eoin Doyle charged forward and unleashed a powerful drive on goal that was palmed away by Steer.

With the game still goalless on the hour mark, Paul Cook decided to replace Dan Gardner and Oliver Banks with Jay O’Shea and Johnson – who received a tremendous reception from the home crowd as it was the final appearance of his loan spell.

And Johnson quickly forced Steer into another save, but he struggled to really test the Yeovil goalkeeper as he held on to the ball comfortably.

A defensive error from Gobern almost cost the Spireites but Sam Foley failed to truly capitalise on the chance, shooting straight at Lee.

The closest either side came to a goal was in the dying moments as Sam Clucas almost stole a winner for the home side. Johnson’s driven corner was flicked goalwards at the near post by Clucas, but the Yeovil goalkeeper managed to block it on the line to secure a point for his side.

It was a first clean sheet in 12 games for Chesterfield and point that ended a run of three consecutive defeats. However, there is no hiding from the fact that more was expected against one of the poorest sides in the division and many of the home supporters will have headed home disappointed. 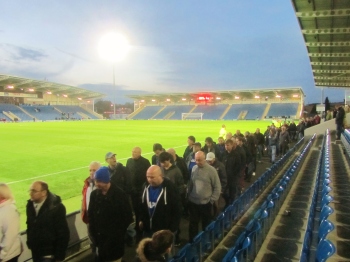