Supported by ‘Nothing But Thieves’ and ‘The Xcerts’, the highly-rated Scottish rockers put on a superb live performance that left the Sheffield crowd buzzing.

There were high expectations ahead of this gig as Twin Atlantic are currently one of the hottest properties in rock music. An amazing summer saw them release their third album ‘Great Divide’ while also performing sets at both Glastonbury and Reading/Leeds Festivals.

The band are now touring the length and breadth of the UK on their biggest ever headline tour to date. It was only into its 5th night when embarking upon Sheffield, but for Twin Atlantic the tour had already been incredibly special with three sold-out nights in Scotland to kick things off. And as the doors to the steel city’s second biggest music venue opened, there was a massive buzz of excitement as everyone knew they would soon be seeing something special.

The audience were treated to performances from two excellent support acts before the main even got underway at around 9.15pm.

First up was Essex band ‘Nothing But Thieves.’, a group whose roots go as far back as their schooldays. ‘NBT’ performed an entertaining half hour set that kicked off with ‘Wake Up Call’ and closed with probably their two most well-known tracks to date, ‘Graveyard Whistling’ and ‘Itch’. What made the five-piece from Southend particularly memorable was the breathtaking singing ability of the frontman Conor Mason. Even Twin Atlantic singer Sam McTrusty was clearly impressed, saying “Wow, can that boy sing!” later in the evening.

The final support of the evening came from fellow Scots ‘The Xcerts’. With a rockier sound than the previous act, they charged on to the stage with the song ‘Cool Ethan’ before powering through a set that included the superb ‘Shaking In The Water’. Finally, they closed with ‘Slackerpop’ during which singer Murray MacLeod attempted – and somewhat succeeded, to getting the audience the join in with the chorus! For ‘The Xcerts’, this was the first of two visits to Sheffield in less than two weeks as they are back playing Corporation on November 11th.

After all the build up and a crowd sing-a-long to Queen’s ‘Bohemian Rhapsody’ between sets, Twin Atlantic hit the stage with the gentle ‘The Ones That I Love’. Their explosive latest single ‘Hold On’ then saw the whole room burst into life.

Frontman McTrusty told the crowd that they wanted to perform as many songs from their newest album, as possible in order to “Give then their day in the sun…or dark!”. And they certainly lived up to this statement, playing all twelve songs from the new release through the duration of night, while also throwing in some older material – such as the fourth song of the night ‘Make A Beast Of Myself’ – to keep both old and new fans alike happy.

Another new song ‘Be A Kid’ was followed by ‘The  Ghost of Eddie’, which concluded with an incredible drum solo from Craig Kneale. The stage then exploded once again with the powerful opening riff to ‘Cell Mate’, probably the heaviest song of the evening. The impressively energetic stage presence of the band combined with some superb lighting effects created an almost arena concert feeling to the event.

The mixture of old and new songs continued as the performance went on. ‘Rest In Pieces’ and ‘I Am An Animal’ were played from the new album, while the very catchy ‘Free’ – the title track from their second album, and the more sombre ‘Yes I Was Drunk’ had the crowd passionately singing along.

The band were clearly very humbled by the number of people that had turned out to see them both tonight and for the whole tour so far. “It’s still new to us” proclaimed singer McTrusty, who spoke about how it was their biggest ever tour to date and jokingly thanked the “15 people” who had seen them play in the far smaller O2 Academy2 venue a number of years ago – really showing how far the band have come in just a few short years.

This is their biggest headline tour to date

A beautiful acoustic performance of ‘Crash Land’, which featured a special cello solo from the expressive guitarist Barry McKenna followed while the audience held up lights which created a wonderful sight. After ‘Why Won’t We Change’, the Scottish rockers then briefly left the stage. 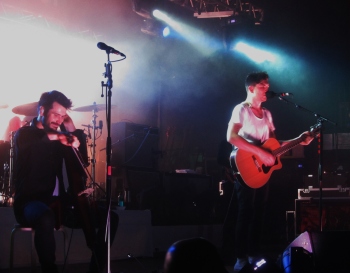 After a few minutes however, they were back for more. ‘Oceans’ kicked off the encore before probably their two most well-known songs, ‘Brothers and Sisters’ and ‘Heart and Soul’ concluded a truly fantastic performance. Everyone in attendance this evening was left with no doubt as to why Twin Atlantic have gone on such a rapid rise. There is no doubt that they are a band destined for even bigger things in the future. 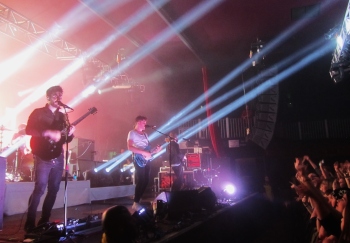 An incredible performance from Twin Atlantic