Hallam moved to second in the NCEL first division table after a hard fought 1-1 draw with Shirebrook Town at the world’s oldest football ground.

The home side were looking to bounce back from their first defeat of the season last Tuesday and looked well on their way to doing so when Shirebrook defender Ryan Lawty directed Scott Preece’s cross into his own net in the 18th minute.

But resilient and hard-working visitors fought back to earn themselves an important away point, courtesy of Ash Rawson’s goal shortly after the hour.

Things are finally starting to turn around at Hallam FC. After a number of difficult years, which included relegation from the NCEL Premier Division (step 9), manager Ryan Hindley and co have finally managed to bring the feel-good factor back to world’s second oldest football club.

An undefeated start to the new campaign saw the club win six and draw one of their opening seven games, with notable victories including a 6-0 against Lincoln Moorlands Railway and 5-0 away at Teversal.

But Hindley’s men were looking to bounce back after suffering their first defeat of season in dramatic fashion last Tuesday night, losing 3-2 at home to Bottesford Town having led 2-0 until the 76th minute.

Tonight’s visitors were Nottinghamshire club Shirebrook Town, formed in 1985. An excellent 2014/15 campaign had seen them finish 4th in the league, just missing out on promotion. But after losing their manager to local rivals Rainworth Miners Welfare during pre-season, they had taken time to adapt to new boss Chris Millington and a mixed start saw them currently sat in 16th position out of 22 – although they had recently found some form with 5-2 and 4-1 victories against Oakham United and Yorkshire Amateur.

The game got underway at 7:45 in front of 102 fans, the largest crowd at Sandygate so far this season, and it was the visitors who started stronger.

Rawson found himself in a dangerous position but was unable to find the target with his shot, before Jake Currie and Liam Greenfield linked up well to force the Hallam defence to deal with a dangerous ball across the face of goal.

But the confident hosts quickly grew into the contest and Jack Hargreaves had their first half chance of the evening, firing an effort over the crossbar from a tight angle.

With 18 minutes on the clock, Hallam took the lead. Shirebrook defender Lawty was forced to deal with a powerful cross from debutant Preece, but he failed to do so and instead directed the ball past his own goalkeeper to give the home side an early advantage.

The South Yorkshire club now began to grow in confidence as they went in search of a second. Joint top-scorer Steve Brammer looked a particular threat, nearly breaking through on a couple of occasions, but the visiting defence held strong.

And Shirebrook almost snatched an equaliser in the final action of the first half. Currie’s free kick deflected off the wall and eventually fell to the head of Antony Rowley, whose header was desperately booted out of the six yard box by a Hallam defender – the clearance greeted by the referee’s half time whistle.

With a 1-0 lead and the advantage of kicking down Sandygate’s sharp slope in the second half, you expected Hallam to finish off the game comfortably in the second period.

Yet, it was the away side in fact that started the second period strongly, forcing a good save from goalkeeper Jack Dennison early in the half and then levelling the scores in the 63rd minute.

Tricky winger Greenfield charged down the right side before firing a ball towards goal that was spilled by Dennison and finally cleared off the line by defender Elliott Simpson. However, the danger wasn’t adequately cleared by the Hallam defence and the ball quickly ended up with Rawson on the edge of the area, who hit a low strike past the ‘keeper to make it 1-1.

In this end to end contest, it was now Hallam who returned to the front foot as they look to regain their lead.

Having set up the first, Preece came close to scoring a debut goal when he picked up the ball on the edge of the area and set himself, before curling a strike agonisingly just inches wide of the target.

As the game approached it’s conclusion, Simpson came even closer to finding a winner for the home side when his powerful free kick smashed off the crossbar, earning a number of “ooh’s” from the disbelieving crowd.

The additional time seemed to last a lifetime as both clubs frantically pushed forward in search of that all-important goal. There were a total of four corners, three for Shirebrook and one for Hallam, in the dying moments of the evening but neither side could make that final breakthrough.

A 1-1 draw offered an honest reflection on a close-fought game and neither manager could be too unhappy with the result, which sees Hallam move up to second in the league table ahead of a trip to bottom-placed Winterton Rangers on  Saturday. 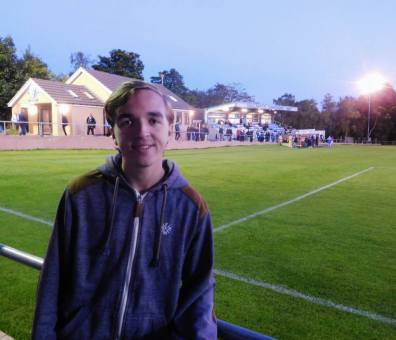 102 in attendance this evening 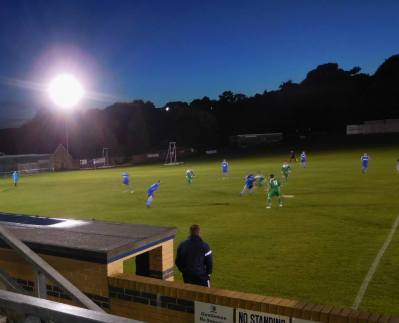 A first half substitution by Hallam 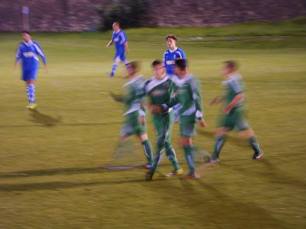 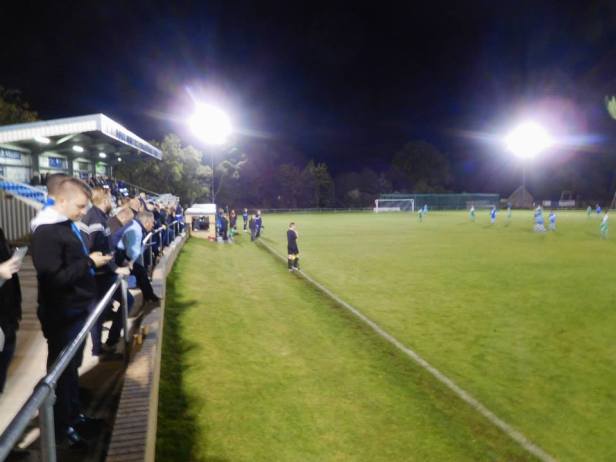