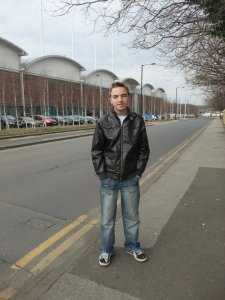 On Saturday 12th March 2011, I was at the English Institute of Sport to watch the Final Qualifying Round for this years World Snooker Championship.

We arrived at around 11:00 after making the short journey to the EIS, and headed upstairs to go and watch the qualifiers in the badminton hall. Just as we were heading in, I spotted Fergal O’Brien walking past and I had a picture with him. Fergal wasn’t playing this morning but he would face Matthew Stevens later in the afternoon.

The badminton hall was set up the same as in previous years, with 6 cubicles lined up and depending on where you sat you could watch up to 3 matches at a time. I decided to watch Martin Gould, who was facing Robert Milkins. Gould made his name in last years World Championship, where he lead Neil Robertson 6-0 and 11-5 before losing 13-12. Robertson of course went on to become World Champion, but Gould came very close to beating him in the last 16.

Gould looked in great form, he was already 2-0 ahead when we arrived, and he took the 4th frame to go in to the mid session interval 4-0 ahead. This form seemed to continue after the break, with Gould taking a 5-0 lead. Howeer, Milkins took the 6th and 7th when Gould looked favourite to take them both. This gave Milkins belief and he took the next 2 frames to end the session just 54 behind.

From where we were sat we could also see the match between Michael Holt and Dominic Dale. Michael Holt started the better before Dale pulled it back from 2-0 to 2-2 at the interval. Holt then pulled away after the interval, ending the session 6-3 with a superb break of 123.

With these two matches ending quite early, we moved across to watch Mark Davis against Rory McLeod. Sadly for Davis, it appeared that he just hadn’t turned up as Rory was 6-0 ahead when we moved over to watch the game. Rory also took the 7th frame, before Davis took the last 2 to make it 7-2 at the end of the session.

Between the two session I had pictures with David Gilbert, Alan McManus, Joe Perry, Rory McLeod and Andrew Pagett – who I hadn’t met before. Me and my Dad also had a chat to Stuart Bingham, who was watching the snooker today before facing Alan McManus on Sunday.

In the match between Selt and Campbell both players looked to be playing well but it was Matthew Selt who took a 3-1 lead in to the mid session interval with a great 123 break in the fourth frame.After the interval though it was a different story as Marcus Campbell came out and won all 5 frames to go 6-3 up at the end of the first session. In the other game Stevens and O’Brien looked evenly matched, and Stevens was just ahead at the end of the session, leading 5-4.

On the tables we couldn’t see Judd Trump lead Dave Gilbert by 6-3 and Ryan Day was beating Liu Chuang by the same score.
I had a good time at the EIS watch the World Championship Qualifiers and I am looking forward to being back at the Crucible Theatre next month. Roll on April!

The badminto hall is through the doors on the right 'Spectators'

Live Scoring on the tv's downstairs

6 games going on at once!

Our view of the morning session, with Gould/Milkins on the left and Dale/Holt on the right 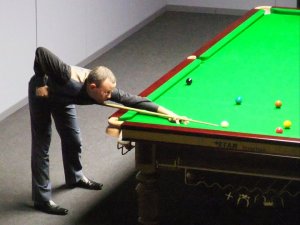 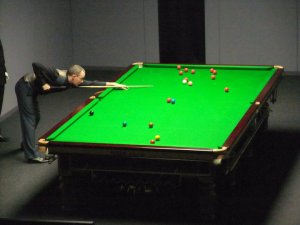 Gould attempts a red to the middle pocket

Gould leads 5-4 at the end of the session

Holt holds out his hand after fluking a red

The reds are all stuck in the corner... 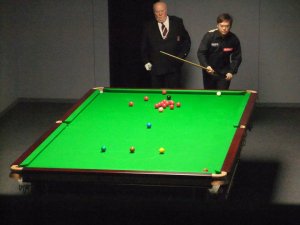 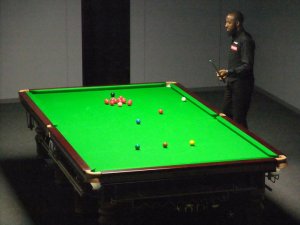 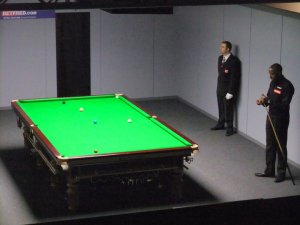 Rory McLeod thinks about his next shot

Campbell and O'Brien sat next to each other! 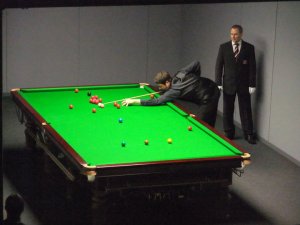 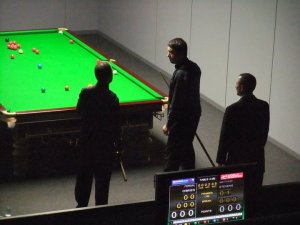 A discussion between Stevens and O'Brien 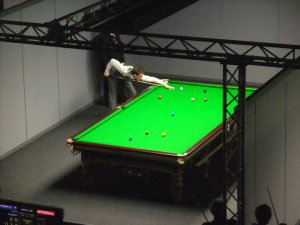 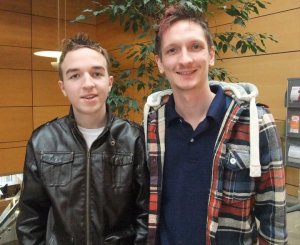