On Wednesday 25th July 2012, I went to Old Trafford, the home of Manchester United, to visit the museum and go on a short tour to get some pictures inside one of the most famous stadiums in the world.

With both me and my Dad having the day off, we decided that we would go to Manchester to visit both Old Trafford and the National Football Museum, which has moved since we last visited it in 2005 when it was located in Preston.

We caught the train to Manchester before getting on a tram directly to the stadium. I had made two previous visits to Old Trafford, the first of which was back in 2003 when we had gone on a full tour of the stadium. However, I was just 7 years old at the time so I don’t remember the trip particularly well. Therefore, we decided that we would try and see if there was a tour that we could go on today to get some updated photos inside the ground.

It was a beautiful sunny day and with just a few people around, we got some great photos in front of the magnificent entrance to the stadium. Since our last visit in 2008, the club had placed a statue of three United legends, George Best, Denis Law and Bobby Charlton, looking towards the ground. With the 2012 Olympic Games football tournament starting at Old Trafford the following day, there were ‘London 2012’ banners all around and the Olympic rings had been placed on the main entrance to mark the occasion.

With the visit of the Games to Old Trafford, it also meant that there was plenty of security and we even had to go through this before enquiring about tours of the stadium. While a full tour was not available due to the Olympics, the club were running a ‘look-in’ which gave visitors the opportunity to go in to the Sir Alex Ferguson Stand, formerly named the North Stand, to get told some of the history of the ground by a guide and take photographs.

Before the short tour began, we had a look around the museum which had some very interesting items, including the programme from the game against Red Star Belgrade signed by the team that played, the programme from the very first at Old Trafford against Liverpool and a postcard that George Best sent to his parents just after joining the club. There were also lots of shirts and boots that had been worn by United legends through the years.

Before the short ground tour began, we had a look in the various sections of the museum. These included a room dedicated to Sir Alex Ferguson, the clubs most successful manager, the Munich room which includes various items such as newspapers from the day after the crash and a room filled with shirts worn by United players for both club and country.

Half way through our look around the museum, there was an announcement to go to the tour meeting point and after watching a short video we headed in to the stand to take our photographs. While we were unable to go pitch side or in the dressing rooms due to the Olympics, it was still great to go in to the ground and see the magnificent stadium on a lovely sunny day.

After the brief tour, we returned and completed the visit to the museum by looking at the Treble exhibition which included replicas of the three trophies the club won in the 1998/99 season. I also had the opportunity to try on some match worn shirts from United legends such as Gary Neville, Edwin Van der Sar, Peter Schmeichel, Darren Fletcher, Paul Scholes and David Beckham as well as an AC Milan shirt worn by Kaka.

After getting a few more photos outside the stadium and looking at the Munich Air Disaster memorial, we made our way to the National Football Museum which you can read about in the next report. 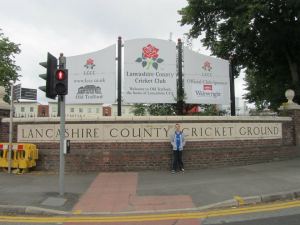 Outside Old Trafford cricket ground, which is home to Lancashire CCC and is very close to the football stadium

Stood by the turnstiles for the cricket ground

The Lancashire Rose on the fence

The football stadium dominates the skyline

Some of the nearby food places 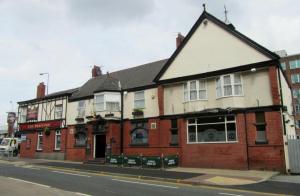 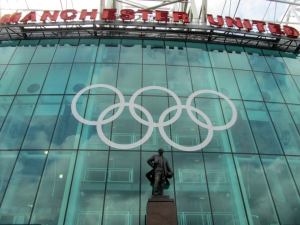 Outside Old Trafford the day before the Olympic Games 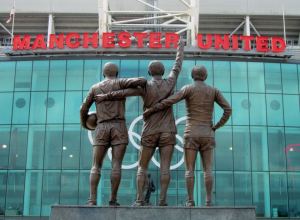 Charlton, Law and Best look towards the stadium

I stand in front of the new statue 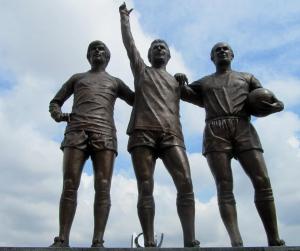 Outside one of the most famous stadiums in world football

with Fred the Red! 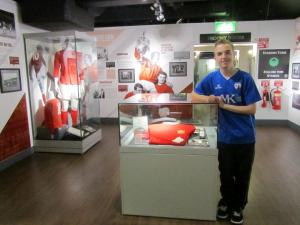 In the first room, dedicated to Denis Law. Behind me is the entrance to the trophy room 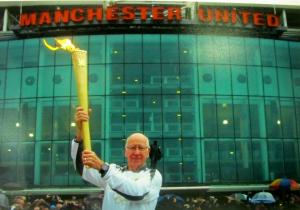 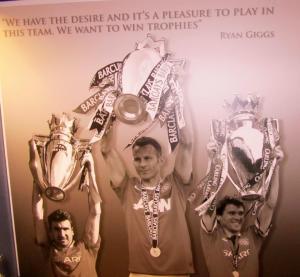 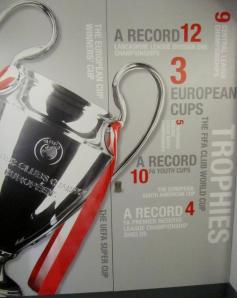 The Red Devils have broken many records in their history 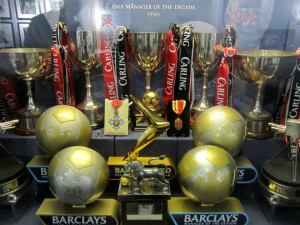 Various awards Sir Alex has received over the years, including Manager of the Month, Season etc.

A newspaper reports the tragedy

A statue of Jimmy Murphy, who worked alongside Sir Matt Busby with the ‘Busby Babes’

Items from the ‘Busby Babes’ era 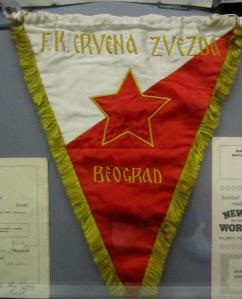 A programme from the game signed by the starting 11. Many of those who signed the programme died in the crash 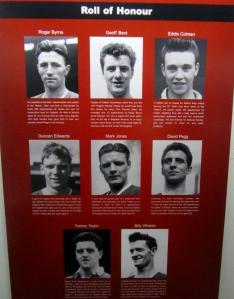 A roll of honour for some of the victims

A rare Newton Heath programme, the name that the club had before they became Manchester United. 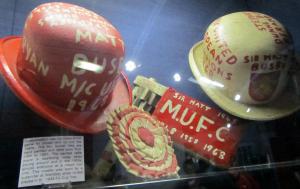 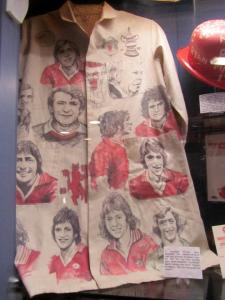 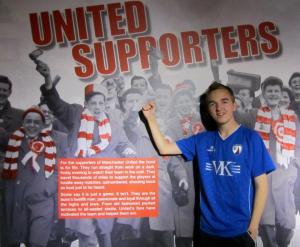 A Spireite in amongst the United supporters! 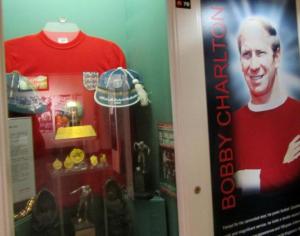 Bobby Charlton, one of only two Englishmen to have won the World Cup, European Cup and League title (the other being Nobby Stiles)

The ball from the FA Cup tie in which Georg Best scored 6 goals as United beat Northampton 8-2.

A postcard from George Best to his parents

Stood by the shirt that David Beckham wore against Greece, where he famously scored a free kick in the final minute to send England to the World Cup.

Looking at the International shirts worn by United players over the years.

Ed McIlvenny’s shirt from the 1950 World Cup. This shirt was worn in the famous game where USA beat England 1-0. 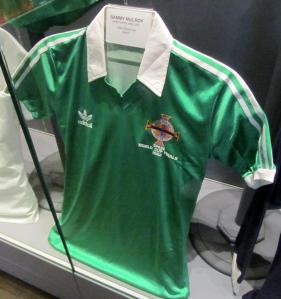 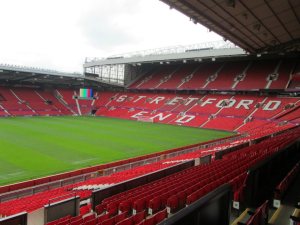 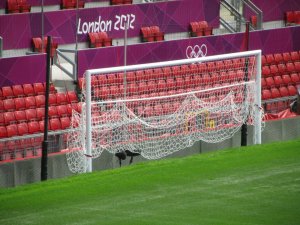 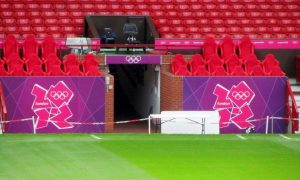 Inside the ‘Theatre of Dreams’ 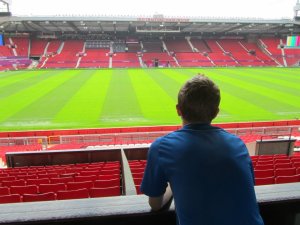 I look over the ground

Bsck to the museum… 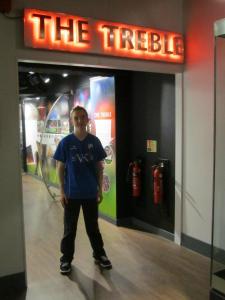 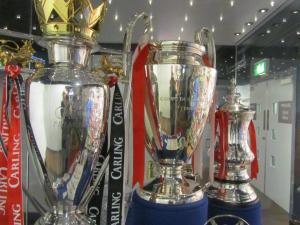 I stand in front of the trophies

A signed programme from the 1999 Champions League final

A pennant from the 1999 Champions League final

I had the opportunity to try on some match worm shirts, This is Gary Neville’s 2009 Carling Cup final shirt 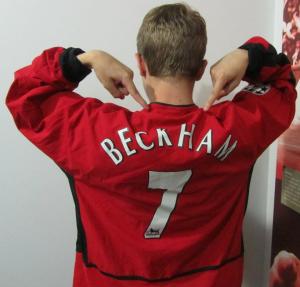 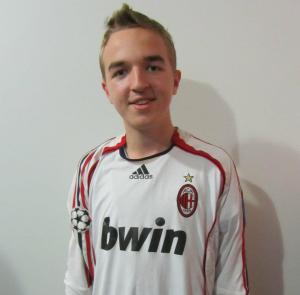 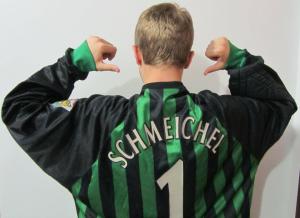 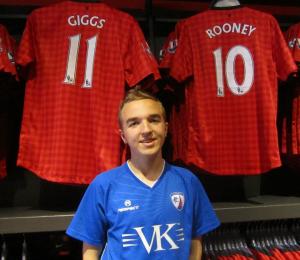 In the club shop

Back outside the stadium

The edge of the East Stand 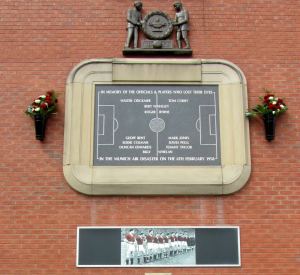 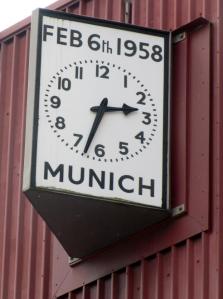